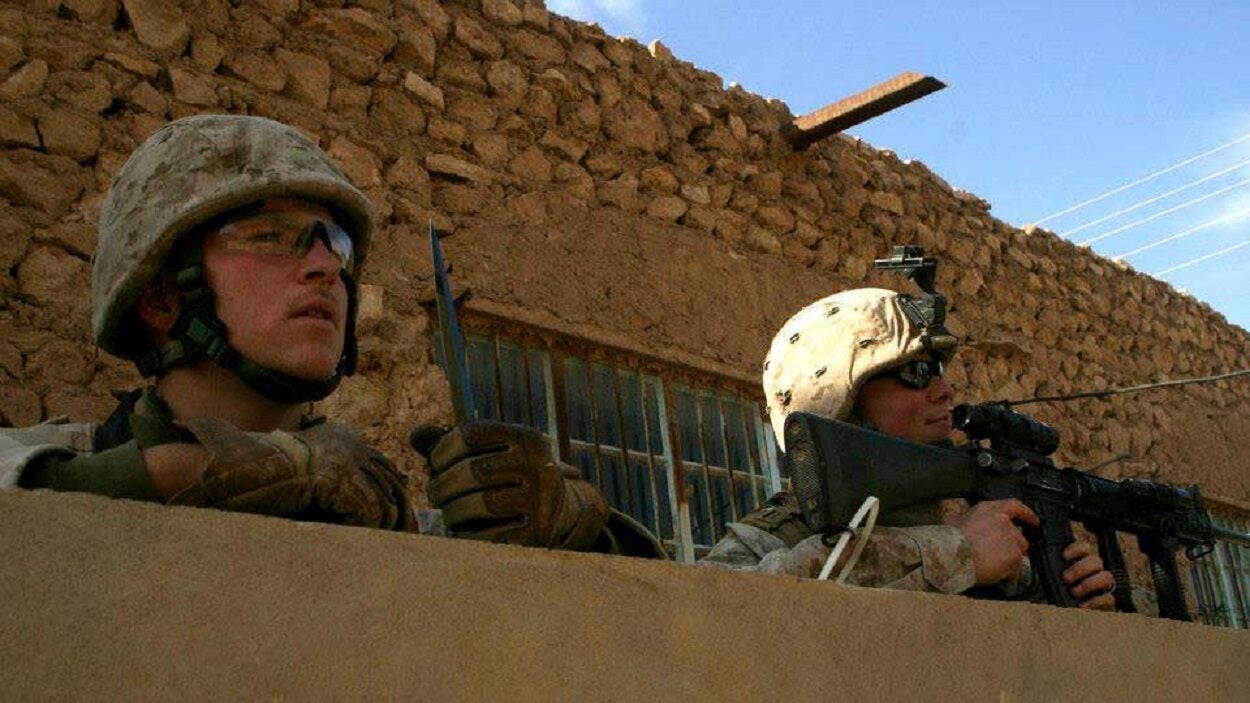 Kacy Tellessen and Kyle Huth on a sweep-and-clear mission in Haqlaniyah, Iraq. (Photo courtesy of the author.).
SHARE

Valentine’s Day. A great Hallmark conspiracy. Growing up, Valentine’s Day was an awkward exchange of barely personalized, mass-produced Valentine’s Day cards. I remember getting X-Men cards with sayings on them like, “You’re X-tra special,” or, “It’s you and me, bub, side by side.” I agonized over who to give what, and with what candy attached. It was a painful process—particularly when choosing combinations for the girls in my grade-school class—that took hours of analysis.

Travis Dodson and his squad had taken an observation post in the city. He was diligently cleaning his rifle, joking with the Marine next to him, Daniel “Mouse” Morris. Travis was in my machine-gun squad back in Hawaii. He was one of the first boot Marines—new guys—to make it to the base and had to endure life as one of two boots in the company for a few weeks before we arrived. I’m sure it was terrible. But he had a good sense of humor about it, never taking the punishment too seriously.

Senior Marines liked to quiz us on our knowledge of machine gunnery, expecting us to remember definitions and numbers verbatim. Any deviation from the sacred words of the machine-gun bible was considered heresy, a high sin to be dealt with swiftly, normally in the form of PT—usually push-ups or pull-ups. In the barracks, among his boot kin, Travis recited the knowledge perfectly, never missing a question. But any time a snarling senior lance corporal confronted him, Travis would lock up. It was a textbook case of the brain farts, and he had it bad. When he came back into our rooms, sweating and out of breath, we would laugh hysterically at his mental flatulence.

We had our spats as friends, but all in all, we were pretty damn tight. I had met up with him as he took trash to the burn pit a few days before Valentine’s Day. We were planning our hazing regimens for the boots who would be waiting for us when we got back from leave. Yes, the cycle would continue, and we would have the responsibility of terrorizing our own boots. We were both giddy, but Travis had a child-like glee. He wanted his turn. For my part, I was being groomed to be the number one man when we got back, and I envisioned Travis as my right hand, dealing out punishment and striking the fear of Chesty Puller into the hearts of the boots. We left each other laughing.

On Valentine’s Day, Travis sat on the second-story floor of a house in the city, his back to a window with burglar bars. I imagined he had his AP brush in his hand, scrubbing away at the sand that tried to infest his rifle. As Travis cleaned his weapon, his friend Morris stood next to him shooting the shit. Their corpsman, Doc Poquiz, stood in the middle of the room.

Meanwhile, a young man crept close to the walls that surrounded the house.

If a person clung tightly to the courtyard walls throughout the city, careful to note where observation posts were located, they could move largely unnoticed. That’s exactly what this man did, crouching low enough so his head stayed invisible to the sentries on the roof. I imagine once the man got in position, he quickly peeked over the wall, locating the window closest to him. Maybe he could see Marines inside; maybe he just knew they were there. The windows of the house had white vertical burglar bars. Throwing any kind of object through the second-story window would take considerable skill or luck—maybe both. The stranger popped his head up again, but this time with purpose; if he had spent years pretending rocks were grenades, like I had, this was the culmination of his fantasies. He might have been a paid teenager with a good throwing arm. Maybe he was a true believer, from Iran, or homegrown. He may well have been a no-shit insurgent: one of the real-life terrorists who haunted America’s collective consciousness since 9/11. It’s easier, at least for me, to picture him as a grown terrorist than as a 12-year-old boy who didn’t understand the game he played.

The stranger must have felt the deadly weight; maybe he even hefted it in his hand before staring at the pin and knowing what he had to do next. He put a finger through the metal ring, either index or middle would do, then, with a twisting pull, he jerked one arm away, careful to keep a good hold of the spool. I think afterward, he probably kept the ring that was attached to the pin, a memento of that one time. If he’s still alive, he might even wear it as a necklace; I’ve known Marines who have done the same. But before that—before he made a necklace, or grew old, or fled the courtyard—he reared back and threw. I like to think that he aimed with precision, that he was just that damn good. It’s too painful to think it was blind, stupid luck.

The stranger let the spool fly off the grenade. The fist-sized olive-drab orb flew through the air, over the wall, and barely missed the burglar bars. He threw it with enough force that it broke through the plate glass window and fell into the room.

The grenade landed in his lap. I wonder if he had time to look down before the grenade did what grenades do. The soundwaves in the confined room must have been immense—enough to give everyone in the room traumatic brain injuries. But grenades always come equipped with more than noise, with their very own built-in shrapnel. The green metal shell explodes like a dying star, sending fatal elements in any which way the cosmos dictates. The usual kill radius of a frag grenade is five meters, and the casualty radius is 15 meters. Travis was zero meters away.

The explosion ripped Travis’s legs apart. Daniel was blown across the room, his left side absorbing all manner of shrapnel and concussive force. Doc Poquiz was blown backward, like the hero in an action movie, his back slammed against the wall, blood pouring out of his ears, his face covered in soot and blood. Most of the blood was not his own.

Poquiz scrambled to his feet and ran to Travis. The rest of the Marines in the squad went into action. Training and love took over. They dragged the two wounded Marines into separate rooms, leaving a trail of blood along the way. They applied tourniquets, ripped off uniform blouses to apply pressure. Everything they could do they did.

Travis never lost consciousness, nor did he cry out in pain. He just kept asking his friends to please not let him bleed out. Doc Poquiz, bloodied and bruised, applied tourniquets to Travis’s legs. In the next room, Daniel fought to survive. The Marines gave him the same treatment, but somehow his injuries were even worse than Travis’s. The Marines applied tourniquets and bandages; they applied field dressings and words of encouragement: “Come on buddy, stay with us.” “You’re going to beat this.” “Everything is going to be OK.” “Hey, you’re going home, you lucky bastard.”

But the words and bandages weren’t enough; the hope and love couldn’t stop the bleeding. They began to administer CPR to Daniel. They tried to give him their very breath.

They splashed water on Travis’s face, trying to keep him from slipping away into that sticky darkness. His eyes fluttered, but he stayed conscious. A mounted patrol from the forward operating base, risking all manner of death by IED, raced to the house, disregarding their own safety for a shot at giving their brothers a fighting chance. They loaded the wounded Marines onto stretchers and put them on Humvees that would take them to a medevac helicopter in the open desert. Daniel had started breathing on his own. They had given him a chance. Travis was still awake and talking, telling his squad leader to stay motivated. The Marines and corpsmen watched as their friends were taken away.

Unlike the movies, the scene doesn’t cut away after a tragedy. You can’t flash forward to a better time. The ones who lived were stuck there, and I’m certain some of them are still stuck there today. The Marines had to go back into the house and clean up the parts of their friends that were left on the ground. They had to get on their hands and knees and clean, through tears and blind rage. Everything in the room they touched instantly called them back to the jarring explosion and splintered friends. But we leave nothing for the enemy.

A Marine dipped his knuckles in the blood of his dear friend, vowing to make them pay, to make them all pay. The cycle continued.

The Marines were gathered in the living room when they got the report that Daniel had died. Travis was alive, but his legs couldn’t be saved, and there were no guarantees. He had lost so much blood, and the desert cities were filled with infectious bacteria that our Western bodies had no immunity for.

Travis would live. Daniel T. Morris would live only in memory, where he still lives today.

I wasn’t there. I was in the FOB. When I heard about it, I thought it was another stupid fucking mistake. No way my good friend had lost his legs. No fucking way. I had just talked to him. Besides, he was too good a Marine. I thought about fighting the Marine who told me a fucking lie. Maybe if I got angry enough, I could somehow stop it, change reality with my rage. I sat and smoked in silence, knowing everything was different again. Knowing that there wasn’t a damn thing I could do about any of it. I smoked until my mouth went numb.

I would get pieces of the story from different Marines and corpsmen, trying to put together a narrative that I could process. I was angry with the Marines standing post. Didn’t they see that piece of shit walking down the street, acting like a guy who had a grenade in his waistband? I wanted more people to blame besides the insurgent.

But deep down, I knew that shit happened, and in the chaos of war, shit hid on every street and down every alleyway in the city.

A reporter from Stars and Stripes was there when it happened: Steve Mraz. I got another story from him. Everyone I talked to had a different version, including the reporter. Thirteen people were there; the explosion left 12 realities. I wasn’t there, and now I have my own version. I hope it’s close to the truth, if there is such a thing.

Kacy Tellessen was born in Spokane and raised in Spangle, Washington, a small farming community that clings to the edge of the Palouse. Tellessen joined the Marine Corps infantry directly out of high school and deployed twice to Iraq as an infantry machine gunner with the 2nd Battalion, 3rd Marines, from 2005-2009. His work has appeared in The New York Times and 0-Dark-Thirty literary journal.