An active-duty U.S. Marine was arrested last month when investigators say he landed in Haiti with boxes filled with guns,... 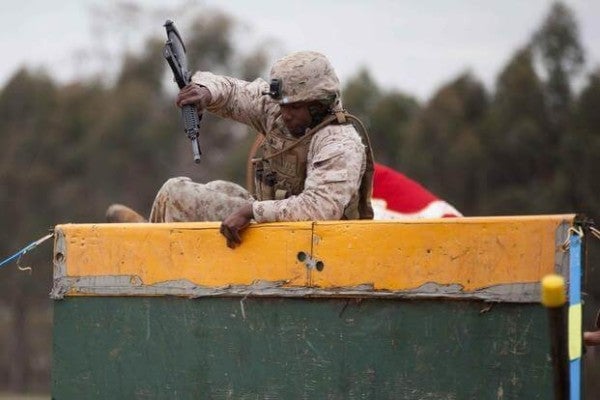 An active-duty U.S. Marine was arrested last month when investigators say he landed in Haiti with boxes filled with guns, ammunition and body armor.

Federal prosecutors indicted Jacques Yves Sebastien Duroseau, a native of Haiti, in North Carolina last week on gun-smuggling charges. Duroseau, described in the indictment as a military firearms instructor, reportedly told investigators he brought the eight guns to the Caribbean country to teach marksmanship to the Haitian army.

Investigators say Duroseau bought some of the guns in Jacksonville, near Camp Lejeune in Eastern North Carolina.

An unidentified “known individual” told federal investigators that Duroseau “wanted to help Haiti and wants to become President of Haiti,” according to the indictment filed Wednesday.

Haitian officials told the Miami Herald “that they became suspicious when they saw the three black cases, two of which were long. Most often the cases mean guns are inside.”

Haitian police arrested Duroseau when he landed in the capital, Port-au-Prince, on Nov. 12, according to U.S. court filings.

Duroseau told investigators he “picked every gun” so he could teach Haitian soldiers how to shoot, according to the indictment. He said he knew that bringing guns and body armor into Haiti was illegal, the court filing said.

According to the indictment, the Marine told investigators that he planned to be arrested when he arrived in Haiti so he could “gain a platform to make a statement.”

“I know why I brought (the guns),” he told federal agents, according to the indictment. “It's still a part of the attention I need.”

In an interview with Naval Criminal Investigative Services agents in Haiti, Duroseau said he wanted to help the Haitian people, according to the indictment. He told them he wanted to “wear the uniform of the military that's been established” and “defeat the thugs that have been creating a little bit of part of the instability in Haiti,” the indictment said.

There is no attorney listed for Duroseau. Federal records show a warrant for his arrest has been sent to the U.S. Marshals Service.

The U.S. Marine Corps published a profile of Duroseau in 2016 that said he was in Haiti during the devastating 2010 earthquake and was trapped for four days before being rescued.

“It took me a while to find (my parents) because it was impossible to drive so you had to walk wherever you were going,” Duroseau said, according to the Marine Corps. “There's a lot of stuff you wished you didn't have to see. There were many dead and the smell was the worst. It was very sad to watch and experience.”

From a young age, Duroseau dreamed of becoming a U.S. Marine, according to the article.

“When I was a kid, I saw the marines back home (because) we had a little war going on, that was the first time I saw them and I hope to be one of them,” he was quoted as saying. “Since that day I had it in the back of my head where I wanted to be a U.S. Marine.”