Upset that his estranged wife cheated on him, a U.S. Marine Corps recruiter from Camp Lejeune "wanted someone to burglarize" her home and steal her car, according to a four-page Duval County arrest warrant 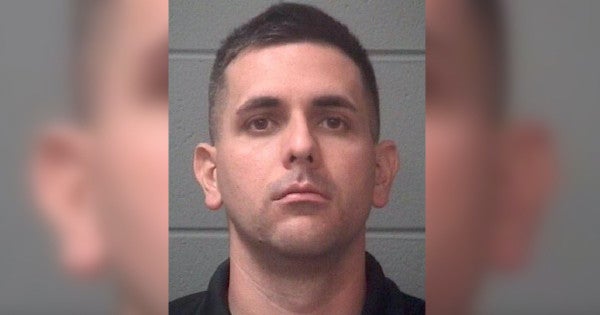 Upset that his estranged wife cheated on him, a U.S. Marine Corps recruiter from Camp Lejeune “wanted someone to burglarize” her home and steal her car, according to a four-page Duval County arrest warrant.

Except his wife is a Jacksonville sheriff's officer and that car was her marked police cruiser, stolen Oct. 13 from their Westside home along with her service weapons and tactical gear, according to the Sheriff's Office.

His arrest followed those of the people police said were sought to carry out the police car theft.

According to police, the officer returned home Oct. 15 from a trip to find her marked patrol vehicle missing from the driveway and her home ransacked. Security camera video showed a car pull up about 9:45 p.m. Oct. 13, and one of three people inside got out. An air conditioner was pulled out of a back window to get in, according to the incident report.

The officer's police-issued Glock handgun and rifle were taken, as well as her shotgun, bulletproof vests, riot helmet, medical bag and a television. The car's keys were taken from a bedroom table and the cruiser driven away, found abandoned in a Firestone Road apartment complex after a tip, police said. The weapons and police gear were not recovered.

Detectives pieced together evidence and identified the vehicle believed to be involved in the crime. That led to identifying the first three suspects, the Sheriff's Office said.

The warrant states that Brathwaite received “an unexpected call” from Bego on Oct. 12, saying his estranged wife would be out of town the next day and her home “unsecured.” It also said Brathwaite had met Bego when he was a recruiter at a Jacksonville high school.

Bego's arrest is not in Duval County jail or court records since he is the spouse of a police officer and can be opted out under state statute. The warrant was released after a request was filed with the State Attorney's Office.