The Marines are investigating an infantryman based at Camp Pendleton for potential violations of the Pentagon's policy against extremism, according... 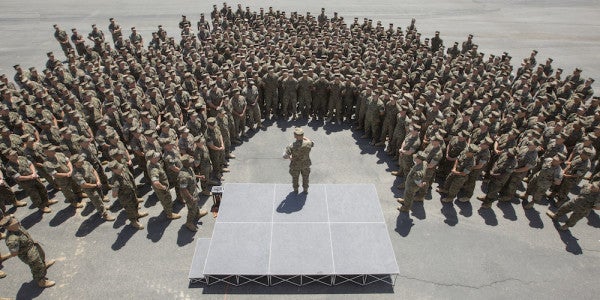 The Marines are investigating an infantryman based at Camp Pendleton for potential violations of the Pentagon's policy against extremism, according to a Marine Corps spokesman.

The material includes a flyer with the white supremacist slogan “not stolen, conquered” over a map of the continental U.S. That flyer has been associated with the white nationalist “Patriot Front” organization. Identical flyers were anonymously distributed at San Diego State University in 2018.

His pages also include stylized patriotic graphics and photo illustrations of early 20th Century nationalistic propaganda which experts say are similar to those affiliated with the American Identity Movement, a white supremacist organization that changed its name from Identity Evropa after its involvement in planning the 2017 Unite the Right rally in Charlottesville, Va., where a white supremacist drove his car into a crowd and killed an anti-racist activist.

Martin describes himself on his Twitter account as a “nationalist” and says he is the chairman of a group called the “U.S. Nationalist Initiative.” Its Facebook page has more than 1,400 followers.

Experts who reviewed the page said it displayed indicators of white supremacist messaging, but one said Martin's is a “borderline” case because older posts on the page featured race-inclusive messaging.

Reached via Facebook, Martin, who is deployed with the 31st Marine Expeditionary Unit on the Navy amphibious ship Green Bay, told the Union-Tribune that, due to his deployment, he's “barely able to communicate with the outside world by voice out here.”

He declined to answer questions about his beliefs or his organization. He also stopped responding to requests for comment over Facebook Messenger.

In a post on his personal Facebook page dated Dec. 2, 2019, Martin called the organizations that marched in Charlottesville “nationalist,” the same word he used to describe his beliefs.

Martin wrote that he has problems with the way the groups at the Charlottesville rally “carried themselves.”

“Nationalists should have discipline, class, civility, and a consciousness for good aesthetic,” Martin wrote in the post. “Instead of engaging in pointless temper tantrums; we should be strengthening our minds, bodies, and spirits.”

Martin, who does not mention the protestor's death, added, “the stature they carried themselves with was no different than the communist scum they were rallying against. They represent Nationalism in a way I don't appreciate. They make us appear like savages and creatures of brutality.”

Recently Martin has defended his writings on social media. In a tweet on Feb. 26, Martin told his Twitter audience that activists were defaming him.

“I've violated no articles of the UCMJ,” he wrote, referencing the Uniform Code of Military Justice, which provides the legal framework of the military justice system.

According to Pentagon regulations, military members are not allowed to advocate “supremacist, extremist …. doctrine, ideology, or causes …. or otherwise advance efforts to deprive individuals of their civil rights.”

Martin is assigned to the 1st Battalion, 5th Marines at Camp Pendleton — the same unit in which several Marines were arrested in July for allegedly transporting illegal immigrants and for drug offenses. Martin was not among those arrested.

“III MEF takes all allegations of misconduct seriously, whether on duty, off duty, or online,” said 1st Lt. Ryan Bruce in an email.

“Any form of racism or discrimination undermines the core values of the Marine Corps and is not tolerated. The command is thoroughly investigating this situation.”

The spokesman did not say how Martin and his social media posts came to their attention.

The Union-Tribune reviewed Martin's Facebook account and the Facebook page and web site of the U.S. Nationalist Initiative with Mark Pitcavage, a senior research fellow at the Anti-Defamation League's Center on Extremism. Pitcavage in February testified before a House Armed Services subcommittee on white supremacy in the military.

Pitcavage said in an interview he has never seen a case like Martin's before because, while Martin's latest posts contain “clearly racist things,” his older posts on the U.S. Nationalist Initiative page suggest a more race-inclusive brand of nationalism.

“No white supremacist group I'm aware of has done memes featuring people of color in a positive way,” Pitcavage said during a phone interview Friday.

“Some of (Martin's) earlier stuff looked like an alt-light, civic nationalist thing,” he said. “But his later stuff — like the post about Charlottesville, talking about aesthetics, talking about fighting for your own people, are more white nationalism. This is a difficult, borderline case; there's certainly enough to make you suspicious.”

Emily Gorcenski, an anti-fascist researcher who created First Vigil, a website that tracks neo-Nazi criminality, was among those on Twitter trying to draw attention to Martin's activity. To Gorcenski, Martin's ideology is obvious.

“He does espouse out-and-out white nationalist beliefs,” she told the Union-Tribune in a direct message. “Patriot Front is an explicitly white nationalist organization and he is quite clearly using their propaganda … he even describes himself as a nationalist.”

Gorcenski also pointed to Martin's photos of himself.

“'Conquered, not stolen' is a white nationalist belief, and despite the fancy window dressing and sharp suits, his messaging is indistinguishable from the messaging of orgs like Patriot Front, Identity Evropa (now known as the American Identity Movement) or the Rise Above Movement,” she said.

Martin's own comments are suggestive of ideology as well, experts said.

In one post on his personal page, a photo of himself in uniform with a rifle, Martin says he's “dreaming about my future blue eyed blonde haired mistress.”

In the comments on the post, he explains “I'd just like to help contribute to the preservation of my lineage.”

In a comment thread on the group's page, Martin “liked” a comment from another user that alludes to a slogan called the 14 words: “We must secure the existence of our people and a future for white children.”

The Anti-Defamation League describes the 14 words as “the most popular white supremacist slogan in the world.”

Peter Simi, a professor at Chapman University who has studied extremist groups for 20 years, said that although Martin appears to go to great lengths to avoid overt references to white supremacy online, his approval of the 14 words is a “giveaway” to the ideology underlining his activities.

“(White supremacist ideology) is pretty camouflaged for the most part but there are a couple of giveaways,” Simi said while reviewing Martin's Facebook account and and page.

The other, Simi said, is a post on Martin's personal account where he says the word “racist” is “made up.”

“That kind of denial is consistent with white supremacist ideology,” Simi said.

Martin says in the post the word “racist” is among several “made up” words used by the left. Another, he says, is “anti-Semite.”

“Sacrifice what you believe in … or get called racist,” Martin wrote. “I know what my choice is gonna be.”

Martin has had one run-in with authorities before.

In 2016, as a senior at Magnolia West High School in Magnolia, Texas, Martin was captured on video describing how he would commit a mass shooting at the school. He was criminally charged with making terroristic threats but the charge was dropped.

According to a story on Houston's KPRC news channel, Martin explained in a Facebook post he was just describing how a shooting could happen at the school, not saying he would do it.

Pitcavage said the Anti-Defamation League is not tracking the U.S. Nationalist Initiative, which Martin chairs, because it appears to be a small operation.

A review of the nationalist organization's website shows only one other person in leadership — Everett Corley, listed as the group's vice chairman.

Corley is a realtor who ran for Congress in Kentucky in 2016 and became embroiled in controversy around the removal of a Confederate monument at the University of Louisville. Corley called a professor a “damn dirty black bastard” in a Facebook post he later deleted, according to the Louisville Courier-Journal.

Corley also has appeared on a white nationalist YouTube show called “The Ethno State” in 2014, the newspaper reported.

Corley did not respond to an email sent to his U.S. Nationalist Initiative address, to texts to a number associated with him nor to private messages sent via Facebook.

The Marines have taken a hard stance against members of white supremacist organizations within its ranks.

In 2018 it court-martialed a Marine who participated in the Charlottesville rally and had joined a neo-Nazi group, and in 2019 it discharged a Marine who included Nazi images in an Instagram account. In February, Marine Corps Commandant Gen. David Berger announced a ban on Confederate paraphernalia on the Corps' bases, telling Military.com “things that divide us are not good.”

Pitcavage said during his Congressional testimony that the unchecked presence of extremists in the military leads to “serious negative consequences for the services … and the country.”

Among the most dangerous extremists, Pitcavage said, are those with white supremacist beliefs.

“While there are many extreme right-wing causes in the United States, white supremacists have posed the greatest challenges to the U.S. military,” Pitcavage said.

Simi said knowing Martin is currently armed and deployed with the Marines is worrisome.

“It makes me nervous, knowing he endorses the 14 words and is walking around with a firearm overseas,” Simi said.

The Marine Corps did not say when the investigation into Martin might conclude.