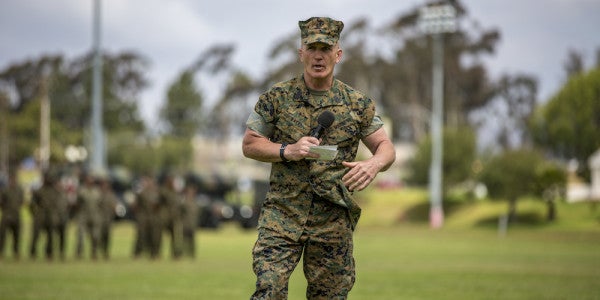 A Navy Cross recipient who overcame grievous war wounds to continue to lead Marines on active duty has finally retired.

Sgt. Maj. Bradley Kasal, perhaps best known for appearing in an iconic image by photographer Lucian Read, retired from his post as sergeant major of I Marine Expeditionary Force on May 18, Marine officials said.

The famous photograph shows a wounded and bloody Kasal emerging from a building in Fallujah, Iraq, in 2004 supported by Marines on his right and left. Then a first sergeant, Kasal had sustained wounds from seven bullets and taken more than 43 pieces of grenade shrapnel during a firefight. He reportedly had lost 60 percent of his blood by the time he emerged from the house, supported by two lance corporals, but still brandishing his sidearm and Ka-Bar knife.

In 2006, Kasal would receive the Navy Cross, the military's second-highest award for valor, for his heroism that day. According to his medal citation, Kasal had rolled on top of a wounded Marine to shield him, absorbing the shrapnel from an enemy grenade with his own body.

“When First Sergeant Kasal was offered medical attention and extraction, he refused until the other Marines were given medical attention,” the citation read. “Although severely wounded himself, he shouted encouragement to his fellow Marines as they continued to clear the structure.”

A 2012 biography of Kasal by Nathaniel Helms, “My Men Are My Heroes,” quickly became a staple of the Marine Corps Commandant's Professional Reading List.

The book characterizes Kasal as an icon even prior to his heroism in Fallujah.

“Even before entering Iraq, Kasal was almost mythical among Marines, known for leading his troops at the front to ensure that he would always be the first man into a fight,” Helms writes. “In his mind, that is what Grunts do, and Brad Kasal is a true Grunt.”

Kasal previously served as the senior enlisted leader of 4th Marine Division before becoming sergeant major of the Camp Pendleton-based I MEF. The posting is one of the most prestigious available to a Marine Corps sergeant major.

When Kasal assumed his post at I MEF in February 2015, he addressed troops within the unit with a brief and characteristically gritty speech.

“To all the Marines and sailors of I MEF, I thank you for what you do,” he said. “I thank you for creating hate and discontent among the bad guys around the world, and I'm truly humbled to work for you and serve beside you.”

When Kasal surrendered his sword of office to conclude a 34-year career May 18, he kept his message simple.

“I want every Marine and sailor to understand they enlisted for a reason and a purpose,” Kasal said, according to a Marine Corps news release. “That purpose was to do something better, to swear to support and defend the constitution, and to be a part of something greater. I ask the Marines and sailors to always be proud of that.”