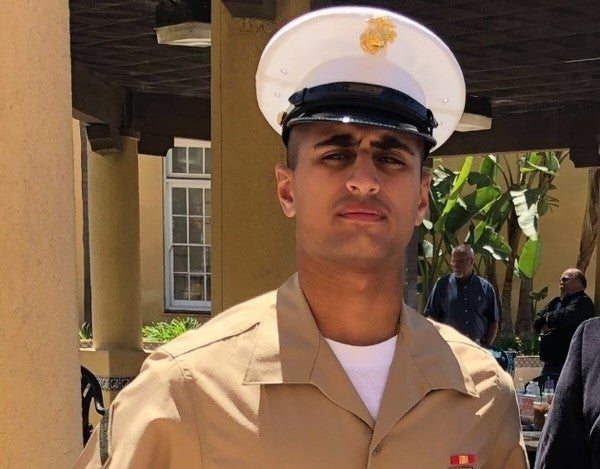 A U.S. Marine from Kent, Washington, was on a weekend pass with a bunk mate from Perry, Georgia, when he was shot multiple times outside an apartment complex during a botched armed robbery attempt shortly before 6 p.m. Sunday, a police detective said.

Sandhu was shot on a walkway just outside of Apartment 72 of Kings Villas apartment complex at 1978 Kings Chapel Road, according to Dykes and an arrest warrant.

A second person, Delvin Devon Ross, 24, was arrested Wednesday night at his Perry residence and charged with party to the crime of murder in connection with Sandhu's death.

Quavion Shaquil Rountree, 25, was previously charged with murder in the shooting of Sandhu.

Rountree's accused of shooting Sandhu several times with a pistol, according to arrest warrants. Ross is accused of providing the pistol to Rountree.

Ross allegedly approached Sandhu with Rountree, handed Rountree the pistol moments before the shooting and left the scene with Rountree in a vehicle, a warrant said.

Sandhu was stationed at the Marine Corps Air Station Beaufort, South Carolina. He was in town Saturday with his bunk mate who had invited him to Perry, and the Marines were staying with friends of the bunk mate's at the apartment complex, Dykes said.

The Marines had planned to return to South Carolina on Sunday, Dykes said.

Sandhu and Rountree apparently had some sort of contact at the apartment complex earlier in the day, Dykes said.

Sandhu was outside the apartment when Rountree and Ross came up to Sandhu allegedly with the intent to rob him and pulled a gun on him, Dykes said.

“I think once that went down, the robbery went bad and he (Rountree) ended up shooting the Marine,” Dykes said.

There were several witnesses who were outside at the time of the shooting, Dykes said. Most fled when the shooting went down, and police had to go out and round them up to interview them, Dykes said.

The investigation is ongoing.