Tagen Schmidt, a Marine corporal who was critically burned when an amphibious assault vehicle he was riding in burst into flames... 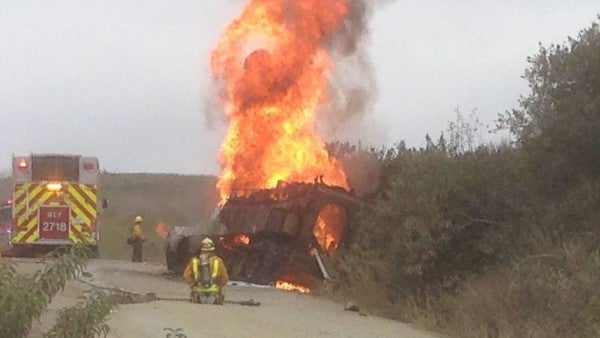 Tagen Schmidt, a Marine corporal who was critically burned when an amphibious assault vehicle he was riding in burst into flames after hitting a gas line at Camp Pendleton, is among four Marines who have filed a lawsuit against multiple utility companies and contractors claiming negligence.

The lawsuit, filed Thursday, Nov. 1 in U.S. District Court, claims the defendants “failed to exercise reasonable and ordinary care which resulted in serious physical and emotional injuries to Marines at Camp Pendleton.”

“We are aware of a gas incident that occurred at Camp Pendleton in Sept. 2017,” said Joe Britton, a spokesman for SDG&E.; “We investigated and determined that an SDG&E; gas line was not involved.”

Britton said he could not comment further on pending litigation.

The incident occurred Sept. 13, 2017 after the tracked, armored vehicle became stuck and ruptured a four-inch natural gas line. According to Schmidt and his parents, Tamby Clawson and Chad Schmidt, who spoke with the Orange County Register shorty after the incident, the vehicle slipped. In all, 14 Marines and a sailor were injured.

“As it rocked back and forth to get it unstuck, it cut through the gas line,” Clawson said. “Gas began spewing out and was coming into parts of the vehicle. The boys in the back all smelled the gas.” That’s when there was an explosion and flames erupted, fueled by the continuous flow of gas, she said, recounting her son’s story.

Attorneys for the four Marines say in the lawsuit that the AAV moved into a ditch where it contacted an exposed and poorly marked natural gas line. The lawsuit cites a Marine Corps report that details efforts by the Marines to get the AAV unstuck by rocking it in the ditch.

“The maneuver required the AAV’s engine to rev to high RPMs,” the lawsuit states. “Per the report, none of the witnesses recalled seeing the grey natural gas line in the ditch, or any warning of its presence, prior to the explosion.”

The AAV backfired, triggering a large explosion that soon engulfed it in flames, the lawsuit states.

All of the Marines involved in the incident were wearing Marine Utility Uniforms, including gloves and eye protection. Nevertheless, according to the lawsuit, the plaintiffs and others in the AAV sustained second- and third-degree burns to their faces, hands and other parts of their bodies.

In December, the Marine Corps released a report on its investigation, citing the ruptured gas line as the cause of the AAV explosion.

The report said the natural gas line was painted gray and blended with the ground. It also indicated that training officials did not know a truck had previously struck the gas line three months earlier. The investigation determined the ground around the gas line had eroded and hazard signs nearby were faded and weathered.

The lawsuit alleges negligence and liability in the accident and says the defendants failed to meet basic safety standards and failed to conform to the “natural gas requirements” for Camp Pendleton.

Among those requirements, the lawsuit states, is that pipes should be buried a minimum of 36 inches below finished grade or as recommended by the manufacturer, whichever is greater. The buried pipeline should include warning tape and there should be proper labeling above the pipeline.

“The companies involved clearly knew about the very real danger of allowing gas lines to be exposed in an area where Marines are training,” says Timothy A. Loranger, a Marine Corps veteran and attorney representing the plaintiffs. “Failing to take reasonable steps to comply with the rules and keep those lines properly buried resulted in our clients’ very serious burn injuries that have effectively ended military careers and changed lives forever. Our Marines deserve better.”