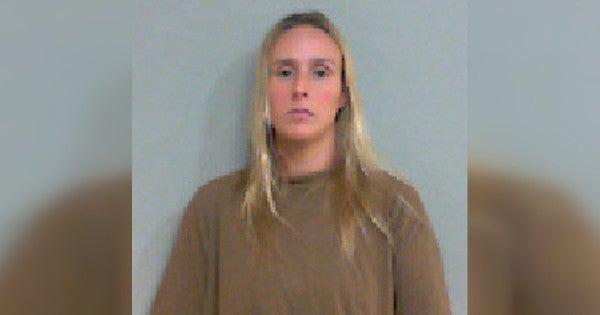 The first of three sisters indicted late last month on charges that they conspired to kill a Florida resident and his wife in Alabama was arraigned today in federal court.

U.S. Magistrate Judge John E. Ott on Monday arraigned Charis Mapson, 30, on charges of conspiracy, two counts of interstate domestic violence, two counts of stalking and one count of using a firearm in furtherance of a crime of violence, according to Northern District of Alabama U.S. Attorney Jay Town and FBI Special Agent in Charge Johnnie Sharp, Jr.

The six-count federal indictment also charges her sisters Tierzah Mapson, 27, and Elisa Mapson, 28, with the same charges. According to the indictment, the three sisters plotted to kill the father of Tierzah Mapson's child by luring him and his wife to a rural crossroads in a small Walker County town on June 18, 2018.

Court records chronicle an elaborate conspiracy that reads like a made-for-television movie with binoculars, disguises, secret campsites, “good luck beads” and lies – lots of them. The plan, according to FBI agents, was to coax the father of Tierzah's baby and his new wife to Alabama to meet at a place under the guise of a visitation exchange but instead to shoot and kill them.

A federal grand jury in Birmingham late last month indicted the three on federal charges stemming from the failed murder conspiracy that culminated with a non-fatal shooting in Walker County last year.

The death date was set for June 18, 2018 near a church on Highway 13 in Eldridge, Ala., a small, rural Walker County community about two miles from Interstate 22 and 22 miles northwest of Jasper. On that date, feds allege, there were more than 150 texts and phone calls between the three sisters, including words of encouragement about what was to come. “It's just a Halo,'' Elisa texted Charis at one point, an apparent reference to a first-person shooter video game.

Charging documents don't say who they believe the shooter was, but agents noted that Charis served in the U.S. Marine Corps from 2007 through 2011 “during which she was required to demonstrate a certain skill level in rifle marksmanship.”

Tierzah was the biological mother of the minor child with a man with whom she had an intimate relationship in North Carolina in 2012. According to a 2014 North Carolina court order, Tierzah had primary custody of the child and the father had a defined visitation schedule that could be modified by agreement.

The baby's father and his wife lived in Winter Park, Florida, a suburb of Orlando. In the early summer of 2018, agents say, the sisters devised the elaborate plan and Tierzah and Elisa temporarily moved to a Florida campsite called “Daytona's Endless Summer Campground” which was 53 miles away from the home of Tierzah's ex-husband.

The baby's father believed he was meeting Tierzah to take the child for a two-week stay. Instead, records show, Tierza and the child never left Florida. Elisa, however, traveled from Florida to Alabama while Charis traveled from Oklahoma to Alabama. “All three used their cell phones to communicate and coordinate efforts,'' according to the indictment.

While Elisa and Charis were traveling, Tierzah was texting her ex, keeping up the guise that she was coming to Alabama from Oklahoma to meet him. Investigators found notes on Elisa's phone that listed: “disguises, ladder, climbing rope, binoculars, 'write down what to text Thorn,' luck beads, bless and luck, gloves and 'after avoid Ala.''

On June 18, according to records, the suspects fired multiple shots at the child's father and his wife while they sat in their vehicle waiting for the meeting. One round entered the vehicle and struck the victim in the shoulder. The father's injuries were not life-threatening.

Federal records do not detail what happened after the shooting or say if the exchange of the child was ever made or further discussed.

Investigators quickly identified the sisters as possible suspects. The indictment against the sisters was filed Aug. 29. The FBI then notified Fortuna police that the sisters might be hiding out in northern California. Officers were on the lookout for two of the sisters – Tierzah and Elisa – who were believed to be staying in a campground in Eureka. Det. Taylor found two vehicles belonging to the sisters in the 2100 block of Riverwalk Drive. The sisters were located a short time later and taken into custody after a brief struggle, according to a police department press release.

Tierzah and Elisa have not yet been arraigned.

“This case took an enormous amount of investigative coordination between a multitude of agencies, both here and outside the district,” Town said. “I commend the FBI, the Walker County Sheriff's Office, and District Attorney Bill Adair for their diligent work on this investigation. There is give and take to everything, and defendants that take off after their criminal activities here in Alabama will be given their day in federal court to account.”

Charis Mapson is being held without bond in the Talladega County Jail.

FBI investigated the case, which Assistant U.S. Attorneys Alan Baty and Jonathan Cross are prosecuting. The maximum prison sentence is five years for a conviction on the conspiracy count and 10 years for each of the interstate domestic violence and stalking charges. The count alleging the use of a firearm in furtherance of a crime of violence carries a mandatory 10 years in prison, which must be served consecutively to any other sentence imposed for the crime.