A Marine MP is accused of strangling a woman at a Camp Pendleton beach after she refused to have sex... 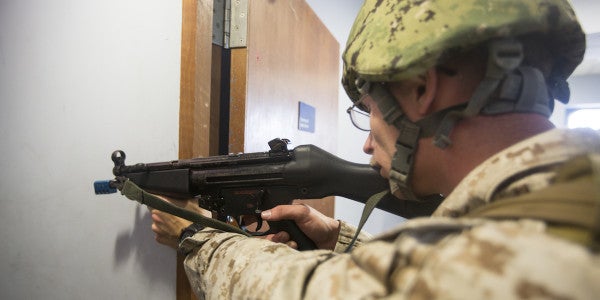 A Marine MP is accused of strangling a woman at a Camp Pendleton beach after she refused to have sex with him in a firetruck.

Responding to an emergency call placed from a neighboring cottage at the base resort, authorities found witnesses restraining Schumi after they overhead the screams of his alleged victim and came to save her.

According to the criminal complaint, a drunk Schumi suggested to the woman that they have sex in a firetruck parked at the beach. She didn’t want to do it and began packing to leave, the complaint states.

Schumi then spun her into a chair and squeezed her throat “until she saw black,” she told investigators. After she kicked herself free, he allegedly threw her to the floor, pinned her with his knees and then returned to strangling her, trying to cover her mouth to keep her from crying for help, authorities say.

It allegedly took four bystanders to hold him until Camp Pendleton’s law enforcement arrived, according to the complaint.

“NCIS does not discuss the details of ongoing investigations,” agency spokesman Ed Buice said by email.

Attempts to reach Schumi, 26, on a social media platform and the telephone number of a parent in Wisconsin were unsuccessful.

An arrest warrant was issued for Schumi on Nov. 6, and he was arraigned in federal court three days later, according to court documents.

Federal prosecutors allege that the woman also reported a previous assault by him in July of 2016 at their residence in Oceanside.

In an online profile, Schumi describes himself as a native of East Troy, Wisconsin, who is transitioning out of the Marine Corps at Camp Pendleton and seeks employment as a civilian police officer.

Camp Pendleton officials confirmed that Schumi is a reservist but declined to identify his unit during the alleged incident or his current command.

A spokesman for the Marines’ reserve component did not return messages seeking comment.

In his online profile, Schumi says that he has been stationed at Camp Pendleton since mid-2012 and that he deployed to Yemen and assisted the U.S. Navy Police with investigating sailors and Marines for multiple thefts and assaults aboard the amphibious warship San Diego.

His profile also lists him as a hand-to-hand combat instructor and a police officer who responded to more than 20 domestic violence cases in his Marine Corps career.

In 2015, he was assigned to 1st Law Enforcement Battalion of the First Marine Expeditionary Force Headquarters Group at Camp Pendleton, according to Pentagon press releases.

Documentation of Schumi’s case was released along with charge sheets on several other cases, in response to a request by The San Diego Union-Tribune under the Freedom of Information Act:

On Sept. 27, Sgt. D. K. Kunishige was convicted at a Camp Pendleton court-martial of the sexual assault and rape of a child, possession and solicitation of child pornography, aggravated assault, adultery and several other crimes. A former non-commissioned officer in 3rd Light Armored Reconnaissance Battalion in Twentynine Palms, he was sentenced to 39 years in prison, reduction to the lowest enlisted rank and a dishonorable discharge upon his release. He raped, molested, beat and strangled a Nevada child on multiple occasions between 2013 and 2016.

A hearing is scheduled Friday at Camp Pendleton in the sexual assault case of Lance Cpl. J. P. Hill, a Marine assigned to I Marine Expeditionary Force headquarters. NCIS agents accuse him of breaking into the room of an unnamed sleeping woman on Camp Pendleton on Dec. 23 to molest her and photograph her during the attack — and then lying about the alleged incident to investigators.

No trial date has been set in a homicide case against Lance Cpl. Tammy Tang, a cook with Camp Pendleton’s 1st Marine Logistics Group before she was confined at the Naval Consolidated Brig in Miramar. She’s accused of killing her young son. The corps has yet to release court documents requested in early October.