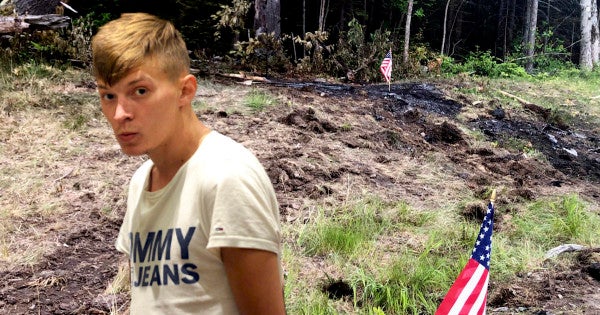 Packages containing suspected heroin were found in the home of the driver charged with killing seven motorcyclists Friday in the North Country, authorities said Monday.

Massachusetts State Police said the packages were discovered when its Violent Fugitive Apprehension Section and New Hampshire State police arrested Volodymyr Zhukovskyy, 23, at his West Springfield home. The packages will be tested for heroin, they said.

Zhukovskyy made a brief court appearance in Massachusetts, where he waived extradition and was turned over to New Hampshire authorities. He is scheduled to be arraigned Tuesday in Coos County Superior Court in Lancaster.

He wore a “Tommy Jeans” T-shirt and warm-up pants at the arraignment. His signed forms while in handcuffs and only answered questions posed by the judge. At least a half-dozen court bailiffs escorted him after the five-minute hearing.

Meanwhile, federal safety reports show that the Massachusetts company that Zhukovskyy drove for — Westfield Transport Inc. — has an out-of-service rate for drivers that is nearly four times the national average. Twice in the recent past, drivers were found with narcotics or amphetamines in their possession.

A man who answered the telephone at Zhukovskyy's employer, Westfield Transport Inc., said Zhukovskyy had just started as a driver and was on his second trip for the company. He only identified himself as “Damien” and did not speak long, but said he was disgusted with Zhukovskyy.

“These people died and this piece of sh– was at home doing drugs,” Damien said.

Zhukovskyy “came out of nowhere” to apply for the job, he said.

He called the event tragic, expressed his condolences to families of the victims and spoke briefly about the company's safety record. But eventually he cut short the conversation and said he had to speak to police.

According to data available through the Federal Motor Carrier Safety Administration, Westfield Transport had drivers placed out of service at a rate of 20.8 percent, compared to a national rate of 5.5 percent. The FMCSA's Safety Measurement System does not name drivers in its listing of company safety records.

The Safety Measurement System said that narcotics or amphetamines were found on drivers during two inspections. Details about the possession were not available on the website, and the report gives no indication that the drivers were intoxicated.

And substance use was not related to any accidents or critical safety violations, the SMS said.

Damien said the drugs violation involved marijuana possession. Even though marijuana is legal in Massachusetts, he fired the driver, he said.

He cut short the conversation when a reporter asked about additional information on the company.

According to the SMS, Westfield Transportation experienced 11 violations in the category of driver fitness from Feb. 14 to April 23. They include not having a commercial drivers license, not having a proper medical certificate, driving with a suspended license and insufficient knowledge of English.

The company's vehicle safety record was slightly better than the national average, 16.7 vs. 20.7, the SMS reported.

Local, state and federal authorities are still investigating the crash on U.S. Route 2 near Lowe's Garage, which was reported about 6:30 p.m. Friday.

According to New Hampshire State Police, a 2016 Dodge 2500 pickup truck driven by Zhukovskyy was pulling a trailer and traveling west on Route 2 when it collided with several motorcycles heading east.

Four of the victims are from New Hampshire, two from Massachusetts, and one from Rhode Island.

All seven died as a result of blunt trauma, Young said at a news conference in Concord on Sunday afternoon.

The victims were identified as:

All five men killed in the crash were members of the Jarheads Motorcycle Club, a club for Marines and Fleet Marine Force Navy Corpsmen. Oakes and Joanne Corr were “supporters” of the club.