Trump’s new helicopter has a flaw: It scorches the White House lawn

The presidential helicopter isn't supposed to leave scorch marks on the White House lawn. So the Navy and Lockheed Martin Corp. are working to fix a "high risk" problem after the new Marine One did just that in a test without the president on board. 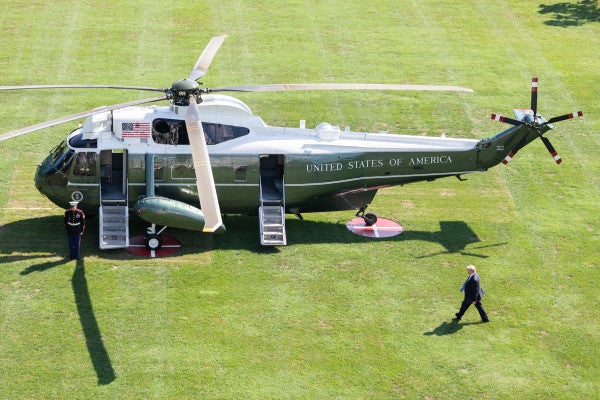 WASHINGTON — The presidential helicopter isn't supposed to leave scorch marks on the White House lawn. So the Navy and Lockheed Martin Corp. are working to fix a “high risk” problem after the new Marine One did just that in a test without the president on board.

The first in a $5 billion fleet of new Marine One helicopters is supposed to be ready to go into service by September 2020. President Donald Trump already has showcased the new aircraft with a flyover during his Fourth of July appearance in Washington.

The previously undisclosed episode occurred last September, during a test “conducted in a manner very different than normal Marine Helicopter Squadron One operations to the White House South Lawn,” Lt. Col. Mike Andrews, a spokesman for the Pentagon's testing office, said in an email.

He said the cause of the incident involving the helicopter, which is designated VH-92A, was under investigation and more information will be released when it's available.

Greg Kuntz, a spokesman for the Naval Air Systems Command, said that “under certain conditions, the VH-92A exhaust can affect a grass landing zone,” and “discoloration of landing zone grass occurred” during the September test.

The Navy, which labeled the problem “high risk,” projects that the helicopter will eventually meet all its key performance requirements. But the Government Accountability Office said in an April report that it “has yet to demonstrate performance requirements related to landing zone suitability, which includes a requirement to land on the White House South Lawn without causing damage to the lawn.”

The Navy's “assessment of this risk has increased since our last report” and “according to program officials, Lockheed's Sikorsky unit expects to have a solution for this requirement by November 2020,” according to the GAO. That's after the helicopter is supposed to be declared ready for initial operations.

No lawn damage resulted from 13 other White House test flights the same day in September and more this year, according to the Navy, including a June 14 landing when Trump inspected the helicopter.

The Navy plans to buy as many as 23 of the new aircraft at a cost of about $214 million each, including research and development, training devices and government-furnished equipment. The fleet is used to transport the president and vice president in Washington and when they travel, in tandem with Air Force One planes. Presidents have traveled by helicopter since Dwight D. Eisenhower was in office.

The present Marine One program replaced an ill-fated effort that was canceled in 2009 after its projected cost more than doubled to $13 billion.

The Navy last month approved limited production, awarding a $542 million contract to Sikorsky to build six helicopters. Sikorsky was given a $1.1 billion development contract in 2014.

Dave Banquer, Sikorsky's VH-92A program director, said in an email that the program is on track to meet required milestones on or ahead of schedule.

In the meantime, the Defense Contract Management Agency said in an assessment earlier this year that one option to avoid damage to the lawn had already been discarded: Protecting it or other landing areas “by staking down a protective blanket.”

“The amount of time needed to place and secure the blanket would make this option impractical,” the agency said.