The Marine's unit is preparing to deploy to the Asia-Pacific region. 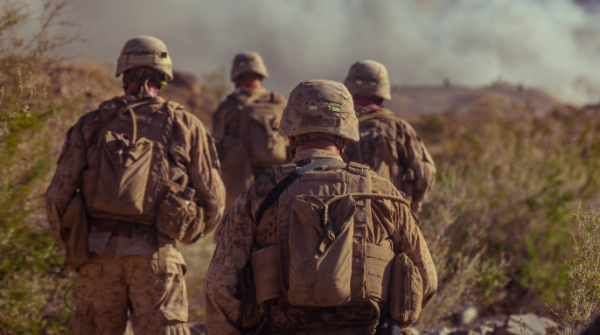 An infantry
Marine suffered a life-changing injury after being shot during a training exercise at a California military base.

The Marine was treated and stabilized by a medical support team on the scene before being transported to Desert Regional Medical Center in Palm Springs, about 50 miles from the base, said 1st Lt. Cameron Edinburgh, a Marine spokesman.

The injured Marine has since been transferred to a specialized care facility, where Edinburgh said he remains in serious but stable condition.

A report from the Naval Safety Center, which documents serious
Navy Department mishaps, said the lance corporal was paralyzed from the neck down. The safety center described the training exercise as a company-level event.

“We recognize our training operations are inherently dangerous, and we place safety at the forefront of every mission,” Edinburgh said. “We stand with the family of the injured Marine, and we are grateful to the medical professionals for their care and support to one of our own.”

The incident was not previously disclosed before it was released on the Naval Safety Center report this week. The center documents all on- and off-duty Class-A mishaps, which include permanent total disability.

Marine officials declined to address several additional questions about the incident, citing the ongoing investigation. Those questions include whether the incident is considered accidental; if it prompted a safety stand-down or changes to training procedures; if anyone is facing charges or reprimand; and whether the Marine was wearing personal protective equipment at the time.

The Marine's unit is preparing to
deploy to the Asia-Pacific region, where it will conduct multiple exercises, according to photos detailing its training at Twentynine Palms. The live-fire exercise was part of the unit's pre-deployment training.