Because Marine 1st Lt. Philip H. Sauer screamed for him to retreat, trading his own life to buy precious seconds... 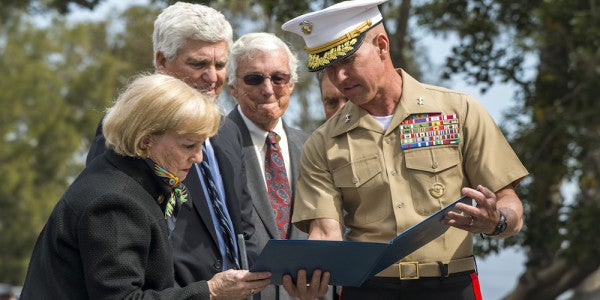 Because Marine 1st Lt. Philip H. Sauer screamed for him to retreat, trading his own life to buy precious seconds for his ambushed men, William Marks survived Vietnam to become a father of two, grandfather of four.

“If it hadn’t have been for him, I’d probably still be there,” said Marks, 72, of Rockport, Massachusetts. “He could see what was going on there. You’d have to have been an idiot not to have seen what was going on. Gunfire. Grenades going off. I mean, we were that close. You could see the shadows of people running toward us.”

Fifty-one years to the day since he died on a wet cliff near Khe Sanh, Sauer was commemorated at the “White House” — the 1st Marine Division’s command post on Camp Pendleton — where his four siblings accepted a posthumous Silver Star on his behalf.

It’s the military’s third highest award for battlefield bravery, but the paperwork for Sauer’s medal was lost in the chaos of war, only to be resurrected by a fellow Vietnam War vet — retired Marine Lt. Col. David Little — in early 2015.

Little only knew from a La Jolla Cove swimming buddy, Tom Sauer, that his brother had died in Vietnam.

Marks met the 25-year-old Lt. Sauer, who grew up in Coronado and St. Louis, only hours before they hiked into an ambush sprung by an entrenched platoon of North Vietnamese Army soldiers around 11 a.m. on April 24, 1967.

The point man died screaming but the lieutenant and Marks dove into a hole. Sauer, the commander of 2nd Platoon, A Company of the 3rd Anti-Tank Battalion, stood up and began firing with his Colt .45 pistol as North Vietnamese bullets and grenades tore through the dirt and trees around him.

He ordered the patrol to flee, pledging to cover them.

Marks reached his buddy, Private 1st Class Bradley Nelson, and spotted an ominous hole in his radio. He lifted up his face saw he was dead, too.

Little knew that he needed three things to get it approved: a witness to the firefight, a superior officer in Sauer’s battalion who would sign off on the submission and a waiver supplied by a congressional representative.

It took nine months of research and a slew of phone calls, but he got all of them — sole survivor Marks; Sauer’s former company commander, retired Marine Lt. Col. Barclay Hastings; and Rep. Scott Peters, D- San Diego.

“He jumped through a lot of bureaucratic hoops,” said Tom Sauer, 70, of La Jolla.

In a private moment amid Tuesday’s pomp, Maj. Gen. Eric M. Smith, commander of 1st Marine Division, whispered his thoughts to Tom and the other Sauer siblings — Mary Schoelch, 72, of Minnesota; Coulter Winn, 66, of Monrovia in Los Angeles County; and Nick Sauer, 77, also of La Jolla — as he presented them the award

“Senior Marines take care of junior Marines, and Lt. Sauer was senior,” Smith said. “It was his responsibility to take care of that patrol and he did that, at the cost of his own life. That is what Marines do.”

After the ceremony, the lieutenant’s siblings, friends and family said they always knew he’d be a great Marine.

Dennis Behan, 78, of Mississippi, remembered Sauer as a “tough, tough kid” who dreamed of joining the Marines after he finished his studies at Missouri’s Westminster College.

A family divided by divorce, Nick and Phil Sauer left Coronado as teens to live with their father in Missouri, but the siblings always found a way to be with each other.

Tom Sauer recalled living with him in the sweltering third-story attic of their grandparents’ house in St. Louis during the summer of 1963.

“He really believed the cause there was right. He wanted to be a part of it. He really thought he’d be helping to defeat communism and he was gung ho about it,” Sauer said.

Their younger brother, Winn, remembered Sauer’s summertime visits to Coronado in other years, when they lived along Margarita Avenue. Phil worked at Cavanaugh’s gas station — now a Mobil outlet at the corner of 4th and Orange — and tinkered with his own Chevy Impala in the family driveway.

“I thought my big brother was so cool to let me ride shotgun,” Winn said.

Schoelch, their sister, recalled Sauer as a “rescue ranger” who once nursed an injured seagull back to health in their bathtub. Another time, he reunited kittens lost in a drainpipe with their mother.

That’s just who he was.

“He epitomized the character of a great Marine,” she said. “He loved his Marine Corps family. He took care of his men.”