This Marine Vet Was Fired By Police For Following His Military Instincts. Now He’s Receiving Justice

When West Virginia Police Officer Stephen Mader responded to a domestic disturbance call at the Weirton home of Ronald Williams... 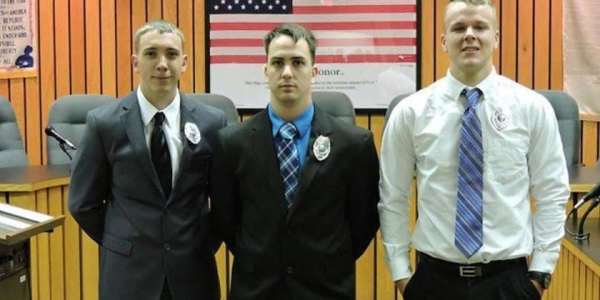 When West Virginia Police Officer Stephen Mader responded to a domestic disturbance call at the Weirton home of Ronald Williams in May 2016, he found Williams standing distraught in his driveway.

Williams, 23, gripped a handgun and pleaded with the officer to fire his gun at him.

Mader, a Marine who served in Afghanistan, paused. He urged Williams to put the gun down, but Williams did not. Mader, nevertheless, did not consider deadly force necessary, seeing Williams as a danger only to himself.

Within a few minutes, two additional officers arrived on the scene. Williams raised the gun and one of the officers — not Mader — fired four times. Williams was fatally struck in the head.

The shooting occurred amid a national debate about deadly use of force by police and a number of cases involving officers fatally shooting black men. Williams was black.

Related: This Marine Vet Was Fired As A Cop For Following His Military Instincts »

In the weeks after the incident, Mader, who had been a member of the Weirton Police Department for less than a year when the Williams shooting happened, was placed on probation, and eventually fired. The officer who shot Williams was not disciplined.

Months later, Mader filed a lawsuit in federal court against the city, saying that he lost his job for declining to discharge his weapon during the encounter with Williams.

On Monday, Mader’s lawyers announced he had reached a settlement with the city of Weirton in the wrongful-termination lawsuit. Under the terms of the settlement, Weirton, near the Pennsylvania border about 35 miles west of Pittsburgh, agreed to pay the former officer $175,000.

“No police officer should ever lose their job … for choosing to talk to, rather than shoot, a fellow citizen,” said Timothy O’Brien, who, along with the American Civil Liberties Union of West Virginia, represented Mader. “His decision to attempt to de-escalate the situation should have been praised, not punished. Simply put, no police officer should ever feel forced to take a life unnecessarily to save his career.”

At the time of his firing, officials from Weirton said Mader’s actions in his encounter with Williams, along with a pair of other incidents in which he allegedly searched vehicles without a warrant, led to his dismissal from the department.

Weirton officials did not respond Monday to a request for comment about the settlement.

In recent weeks, several police officers have been killed in the line of duty.

Since New Year’s Eve, three Colorado law enforcement officers have been shot and killed in separate incidents. In one of those incidents, last week, a officer in Colorado Springs, Colo., was shot and killed responding to a call of a stolen vehicle.

On Saturday, two police officers in a suburb of Columbus, Ohio, were killed when they arrived at a residence where someone had called 911 and hung up. Their deaths drew condolences from President Donald Trump, who called the incident a “true tragedy.”

Maria Haberfeld, a professor at the John Jay College of Criminal Justice in New York, said there is no standard protocol regarding use of force.

“Each department had its own protocol, which should be part of their standard operating procedures. … In general, all the standard operating procedures are guidelines and recommendations and are not mandatory, leaving the officer much discretion,” Haberfeld said. “If the officer didn’t feel that his or others’ life was in danger, then he was absolutely within his rights to decide not to shoot.”

She added: “Ultimately, it is always about the officer’s perception of danger.”

Related: How Cops Are Gearing Up After Mass Killings And Police Shootings »

An officer’s perception of danger has been subjected to intense scrutiny in recent years, especially with readily available body-camera footage and bystanders with cellphone cameras.

In December, a former Mesa, Ariz., police officer was found not guilty of second-degree murder after he shot an unarmed man crouched in the hallway of a La Quinta Inns & Suites. Body-camera footage showed the officer, Philip Brailsford, shooting 26-year-old Daniel Shaver, who was white, with an AR-15 rifle.

“Please do not shoot me,” Shaver, on his hands and knees, said as he crouched in a hotel hallway moments before the shooting.

Brailsford testified that he feared for his life. The jury also found Brailsford not guilty of a lesser charge of reckless manslaughter.

Several other high-profile shootings in which use of force has been criticized by activists have involved police officers shooting unarmed black men.

In May, an Oklahoma jury acquitted an officer who shot and killed Terence Crutcher as he stood with his hands above his head along a rural highway.

In June, a Minnesota jury acquitted the officer who killed Philando Castile during a traffic stop, which was live-streamed on Facebook by his girlfriend. That same month, an Ohio judge declared a mistrial after jurors deadlocked, unable to agree on whether to convict a former University of Cincinnati police officer who killed Samuel DuBose in an incident captured on a body camera.

Mader, who since being fired from the Weirton Police Department has worked as a truck driver, said he’s relieved the case is over.

“At the end of the day, I’m happy to put this chapter of my life to bed,” he said in a statement released through his attorneys. “My hope is that no other person on either end of a police call has to go through this again.”