Brendan Bialy, 18, detailed the horrific sight of an armed classmate looking to unleash terror in his high school classroom, and the split-second decisions that he and two other students made to take down the suspect and prevent further bloodshed 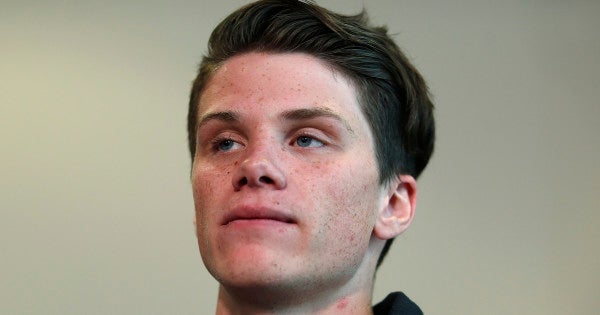 Brendan Bialy saw a student walk into his 12th grade English class at STEM School Highlands Ranch on Tuesday and pull out a gun. Bialy didn't think. He didn't contemplate his moves.

“I don't like the idea of running and hiding,” Bialy told a packed news conference Wednesday afternoon.

Bialy, 18, detailed the horrific sight of an armed classmate looking to unleash terror in his high school classroom, and the split-second decisions that he and two other students made to take down the suspect and prevent further bloodshed.

One of those students, Bialy's good friend Kendrick Castillo, died by throwing himself on the shooter. The other, Joshua Jones, suffered two gunshot wounds and is recovering at home.

“Ultimately, Josh is going to recover from this and is going to be even stronger as a result of it,” family friend Josh Lewis said.

By some divine fortune, Bilay said, he managed to survive the incident unscathed.

As Bialy sat down next to his parents and attorney in an Englewood law office, he wanted to make one thing very clear to the mass of reporters: He was sitting there, next to his loving parents. But others were not.

“Kendrick Castillo died a legend,” Bialy said. “He died a trooper. He got his ticket to Valhalla, and I know he will be with me for the rest of my life.”

Bialy said when the gunman entered the room, Castillo reacted without hesitation, lunging at the shooter “like a bowling ball.” Bialy joined his friend — a friend he made as a freshman, a strong relationship that lasted through their senior year.

“The gunman was there, then he was against the wall, and he didn't know what the hell hit him,” Bialy said.

As he watched the suspect brandish his gun, Bialy said he first felt “absolute fear,” but then his body sprung into action. He moved to help Castillo, dislodging the gun out of the shooter's hand. During the altercation, the shooter fired once or twice, Bialy said.

Bialy said he personally knew the person who entered the classroom, but declined to identify which of the two STEM School shooting suspects it was.

He wrestled the gun away, while Jones stayed on top of the shooter. But Castillo, Bialy saw, was on the ground, not moving. He gave Castillo verbal commands, but the 18-year-old wasn't responding. Bialy started pumping his friend's chest, desperately trying to revive him.

Bialy described the incident in practical terms the way a Marine might. That's because he hopes to soon be one. Bialy joined the Marine Corps Delayed Entry Program and is scheduled to report to recruit training this summer, the Marines said.

“At the end of the day, the reason I joined is to help people,” he said. “And I'm going to do that.”

Bialy remained surprisingly upbeat for a teen who just 24 hours ago watched his classmate, his friend, die on the ground next to him.

He thinks about how he escaped the incident unscathed, save for a few scrapes on his knees, while his friend was killed beside him.

“I was blessed by something,” he said. “Somebody watching down on me.”

He said he feels uncomfortable with people throwing the “hero” word at him. Bialy doesn't view himself through that lens. When asked how he acted so bravely, Bilay looked at his parents, seated on either side of him and shrugged.

“It must be the genetics,” he quipped.

But Bialy said he appreciates the support he's received on social media from people in Florida all the way to Ireland. He's also seen scores of messages fill his inbox from service members in the Marines, Army, Navy and Air Force thanking him for his service.

“But every time I hear something like that, I need to let them know that Kendrick Castillo and the other student were in the thick of it on rolling on the ground where I was too,” Bialy said.

He recalled their close friendship — aimlessly cruising around town in their cars, watching silly YouTube videos and hanging out and talking.

“Kendrick was a total nerd,” Bialy said with a smile. “He was a fantastic, wholesome person.”

When asked, Bialy would not say whether he thought changes needed to be made on the school level or in government to prevent future incidents like the one at STEM.

That is his motto.

SEE ALSO: Switzerland Has A Stunningly High Rate Of Gun Ownership — Here's Why It Doesn't Have Mass Shootings

WATCH NEXT: 'I Can't Die Today' — An Airman Recounts Aiding Civilians During The Las Vegas Shooting