If the Marine Corps is serious about getting ready to take on a near-peer enemy like China in the future, then it's time to fold its 13-year-old special operations command and apply those resources elsewhere, a new report argues 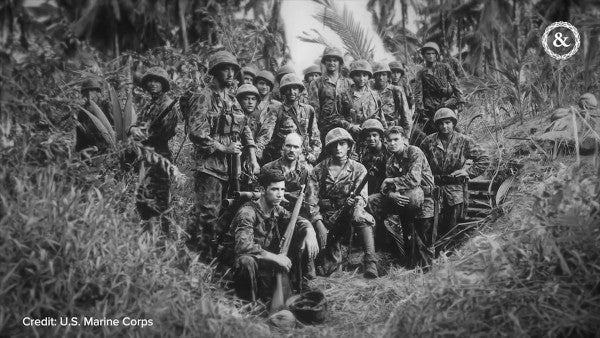 If the Marine Corps is serious about getting ready to take on a near-peer enemy like China in the future, then it's time to fold its 13-year-old special operations command and apply those resources elsewhere.

At least that's the argument one retired Marine officer made this week while presenting ways the service can better prepare for large-scale naval operations – and it's causing quite a stir in the Marine Corps special operations community.

Dakota Wood, who worked as a strategist at Marine Corps Forces Special Operations Command from 2012-2013, released a 60-page report on Thursday titled “Rebuilding America's Military: The United States Marine Corps.” It was published by the Heritage Foundation, a conservative Washington think tank where Wood serves as senior research fellow for defense programs.

Facing relentless operational tempo and ongoing budget woes, the Marine Corps should reevaluate where it's spending resources, Wood writes. As part of that effort, he said service leaders should “strongly consider disestablishing [MARSOC].”

“It's a great outfit and they're doing great things, so this is not to disparage MARSOC,” Wood told Military.com. “It's stepping back and saying, 'OK, Marine Corps, what are you supposed to be doing? And how are you using the resources that you have?'”

Wood's call to disband the command comes after the Marine Corps released its 2020 budget request, revealing plans to increase the number of MARSOC billets. But the 2,700 Marines already assigned to MARSOC do more to benefit U.S. Special Operations Command than they do the Marine Corps, Wood wrote.

“The Corps' commitment to MARSOC, while a boon to SOCOM and the good work it does for the country, is an opportunity cost for the Corps and the work that only it can do, as opposed to SOCOM's role and the contributions long made to its mission by the Army, Navy and Air Force,” he said.

In a statement, MARSOC spokesman Maj. Nicholas Mannweiler said the command was aware of the Heritage report and its recommendations.

“The recommendations made in the paper are one aspect of a much broader conversation on Marine Corps and joint operations in response to our evolving national security challenges,” he said. “MARSOC will continue to partner with our fellow Marines in enhancing lethality, interoperability, integration and interdependence as well as with our rich network of and interagency partners.”

For Marine Raiders who fought for a place within U.S. Special Operations Command over the past 13 years, Wood's suggestion falls flat.

U.S. Marine Corps Raiders with the 3d Marine Raider Battalion take a break during training at Eglin Range, Fla., May 22, 2018

The original Raider battalions were disbanded toward the end of World War II, and it was a decades-long effort to bring them back. Having someone make a case for dispansion again undoes years of hard work on and off the battlefield, they say.

MARSOC's critical skills operators were essential in Iraq and Afghanistan, for example, said Nick Koumalatsos, who spent 12 years with the command and in the Marine Corps reconnaissance community. Dissolving MARSOC now, he said, would be a huge blow.

“If there's a major theater war with China or Iran, it's not going to look like the Second World War,” Ackerman said. “… “To say these 2,700 guys will be better suited in Marine regiment belies a lack of understanding of what Marine Raiders have contributed in the last 10 years.”

The Marine Corps also can't operate in a vacuum, where it doesn't have a connecting line to SOCOM, said Prime Hall, a former Raider and water-survival instructor.

“This is much larger than the Marine Corps,” Hall said. “This is about what is best for the Department of Defense and the country as a whole.”

Koumalatsos agreed. The entire military, he said, benefits from MARSOC's relationship with SOCOM and the other branches.

“We can't just go over here and color with our own coloring books and not have any friends,” he said.

“Up until 2006, the Marine Corps had pushed back against having an elite force and being a part of the special operations community because they were fully busy doing Navy-Marine sorts of things,” Wood said. “It was only because they were forced to create a special operations service component by then-Secretary of Defense [Donald] Rumsfeld because SOCOM was extraordinarily short on teams.”

A recruiter with the U.S. Marine Corps Forces Special Operations Command (MARSOC) screening team wears the MARSOC insignia during a brief at the base theater aboard Marine Corps Base Hawaii (MCBH) on Sept. 7, 2017

While they met the challenge, creating well-trained and professional special operators, the ongoing effort to equip MARSOC pulls resources away from the Marine Corps' main mission, which is going to need all the manpower and money possible if a big conflict breaks out in the Asia-Pacific region, he said.

But even as the Marine Corps takes steps to get ready for that type of fight, Marine Commandant Gen. Robert Neller said last week that up to 90 percent of what his service does “will not be against a near-peer adversary.”

“It's going to be against someone else,” he said.

That's why removing the Marine Corps' highly trained, unconventional assets doesn't make any sense, Koumalatsos said. The next fight is likely to include technological threats, the internet and asymmetrical warfare. Why get rid of those who've trained for and operate in that space, he said.

Raiders also benefit the Marine Corps by helping streamline the often slow acquisition of new technology and gear, Hall added. SOCOM also invests in a lot of the training and education for Raiders, Koumalatsos, so the Marine Corps isn't footing the command's whole bill.

The Raider battalions also have an important place in the Marine Corps' legacy, and to see someone advocating to again remove them is disheartening, Ackerman said.

“That we can finally say 'I'm with 2nd Marine Raider Battalion and here's who we are, here's our story,' I think is a really great, healthy thing not only for Marine Raiders but for every single Marine in the Corps,” he said. “To want to undermine that because of some resourcing argument is to me just backward and retrograde.”