He believed he’d only be activated for “something with a clear purpose.” Then he was deployed to Iraq. 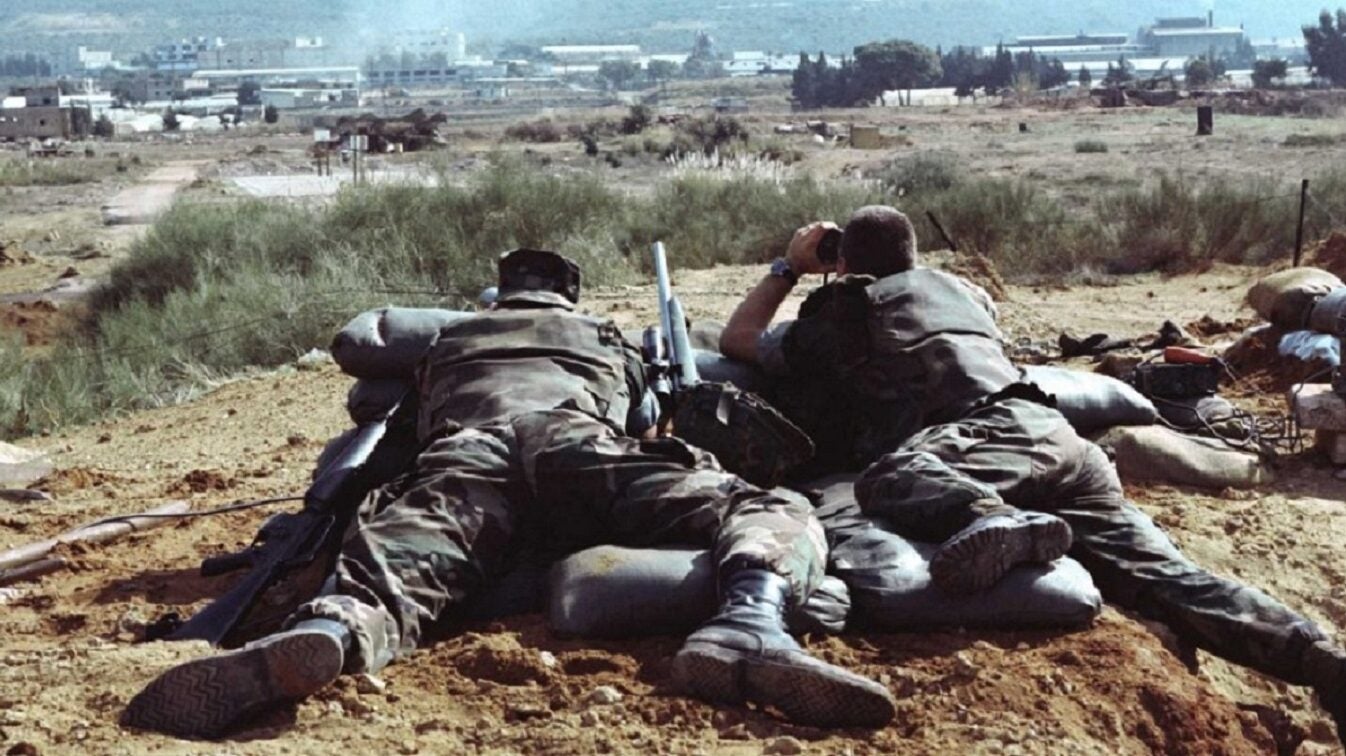 The Lebanese captain spoke in an animated voice in, I supposed, Lebanese. I couldn’t understand what he said, but it aroused my interest when I noticed him seem to gesture with his arms as if pointing a rifle.

“He says they will take you somewhere where you can be shot at,” explained a helpful bilingual Lebanese man.

I laughed, I hoped convincingly.

This happened in October 1982. I was a lieutenant in the Marine Corps, and I was in what it seemed most appropriate to call “war-torn” Lebanon. There was no war at the moment, but in parts of Beirut, where we were stationed, every building had been knocked down, pockmarked, or even eroded by bullet holes. We’d landed only a few weeks before, too late to see any fighting. It still seemed an unlikely place for my baptism of fire, whatever the captain said.

We were far from the capital city. The building we stood in, as our hosts treated us to a Lebanese breakfast, looked incongruously alpine. In fact, it looked as if it had been a ski lodge. Hadn’t we even seen some lifts as we drove up?

The Lebanese captain appeared nearly as unmilitary as his headquarters. His hair was unacceptably long by Marine standards, and I noticed, with well-trained distaste, that he wore civilian dress shoes with gold chains on top with his fatigue uniform. These Lebanese men had seen combat; we hadn’t, but we were far more soldierly and imposing in appearance.

The breakfast tasted pretty good, though: salty flatbread served with tiny cups of coffee. This kind of fare wasn’t as common in the United States as it later became, and it was fairly new to me—and a nice break from C rations. Two weeks later, a meal consumed in a luxurious Lebanese restaurant would give me diarrhea for two weeks, but that’s another story.

Organized to give junior officers in the battalion a look at some parts of Lebanon outside Beirut, just what we were supposed to be doing on this trip felt fairly vague. But after some discussion between the senior American officer, a first lieutenant, and the Lebanese officer, who spoke English and was called “George” by the Marines, we loaded back into our jeeps and, with some additional Lebanese guides, drove off. We were to visit a position under the command of this company, George told us, farther forward.

I suspected that the Syrian army—enemy to our guides, although not to us—was not far away. I did not know even generally in what direction they might be, but I started to fantasize, as if I were telling the story later, about a chance encounter with Syrian troops. This is very nearly what happened.

As we approached the Lebanese position, which consisted of a bunker, trench line, and armored personnel carrier, I heard a heavy machine gun firing. We could see, almost at the instant of hearing, a Lebanese soldier standing on the APC and firing its 50-caliber machine gun. All the vehicles halted.

We ran to the trench line and jumped in. Lebanese soldiers were already there. No one but the lone Lebanese on the APC seemed to be doing any firing. One of the Marines borrowed a rifle from a Lebanese soldier and fired in the direction of the Syrians. I had only my pistol, and in any case, it did not seem like a good idea to fire my own bullets, for which I was accountable. I borrowed another Lebanese soldier’s rifle, indicating I would use it to fire at the Syrian positions. It seemed the thing to do. We’re Marines and there is shooting going on, I thought.

We went into action as if we had been waiting, all the nervous weeks in Beirut, for that chance. Maybe that was it. We had the chance to shoot, and so we did to relieve our nerves. I crawled to a slightly more forward position with my newly acquired rifle and some field glasses to get a better look. After a few minutes, a Lebanese soldier, one who belonged to the position and who was not known to me, came out to tell me to come back. He pointed to the loose pile of rocks that was the only parapet.

I went back with him.

The firing had, by then, died down. I suspected it had been pretty one-sided all along. The Lebanese soldiers may even have decided to make good their promise to show the Marines some fighting by inciting the exchange with the Syrians. Could I even be sure that I had been shot at? We posed for pictures with the Lebanese soldiers at the tiny, isolated post, and, after a few minutes, we went on our way to another position—another part of the tour.

The next location we visited was, if anything, less impressive than the first: a couple of tents pitched on the reverse slope of a hill, some holes dug, and a rock wall facing, I supposed, the Syrian positions. We heard no gunfire when we arrived, but some of the Marines started to borrow weapons from the Lebanese. I was a little surprised to see another lieutenant I liked fire a big 50 cal. toward the Syrians. I had decided I wasn’t going to shoot this time, but I still wanted to see. The Syrian emplacements seemed to be closer to the second position than to the first, and I stood behind the low wall, trying to see with my binoculars if the Syrians would return fire. As I stood watching, I heard something whizz by my head, close. Faster than it takes to think, I had sprawled along the base of the wall, sure that I had at last been shot at.

When I had recovered my poise sufficiently, I looked up to see a Lebanese soldier crouched behind the wall a couple of yards off. I hadn’t noticed him at all before, despite my binoculars and curiosity. He was old for a soldier, grizzled and unshaven. Smoking a cigarette, he seemed to nod at me, the friendly wall, and the sky overhead all at once. I felt chastened, foolish, and scared, but also instructed by the old man and his big outdoor classroom. I wonder if I can say what I learned.

For some time, I had expected that my first time under fire would be a learning experience—that I would discover things about myself, about reality, that I hadn’t known before. So to some extent, the idea of learning from a nodding old Lebanese soldier and a flying object could be a self-fulfilling prophecy. But my efforts to see on that day may have at least resulted in my being able to see clearly that, for all their comic-opera air, their odd costumes and customs, and their seeming failure to fight a war as I has been told one should be fought, thousands of real people, Lebanese and others, had already been killed in this minor conflict.

It had also been impressed upon me that, although I was not supposed to be there, in what I later learned was the Beqaa Valley, and although it would be ludicrous for an American officer, and someone as extraordinary as me, to be killed in this poor excuse for warfare, just possibly, I almost had been.

Something else too. Surely this was not my country, not my war. (Who would claim it, of all the factions and combatants in Lebanon?) It wasn’t for me to come to this little outpost and stir up anything that grandpa and company might have to answer for later—if the Syrians decided our companions had gotten too noisy for a quiet sector.

It was time to go. There were others who thought so too, by now. Maybe other close calls, I thought. Soon, we walked gingerly down the hill and got back in our jeeps.

Riding up front in a jeep, top down, boot on the fender, is usually a pleasant experience, and it seemed particularly nice that day. It was a beautiful fall day, slightly overcast and much cooler than any day I had seen in Beirut. The pine trees looked and smelled the same as the ones back in Camp Lejeune, North Carolina. The weather reminded me of home, and I smiled at the thought that I always associated fall with school. I looked back in the convoy to see the lieutenant who had fired the machine gun riding in the jeep behind mine, and something occurred to me. Could that whizzing by my head have been an expended shell casing kicked out by the gun being fired a few yards away? Quite possibly. I considered this question most of the way back to the city.

That was long ago, before the Beirut bombings, 9/11, and the long wars that followed, when both I and the country were perhaps more innocent. I lost some of my innocence in Lebanon. I now had an idea of how these things get started, how they can play out and turn casually deadly.

A couple of weeks after, along with the other officers involved in the incident I’ve described, I received a nonpunitive letter of reprimand from the battalion commander. In my case, he immediately followed this by giving me a written endorsement that virtually guaranteed my augmentation into the regular establishment of the Marine Corps. That was my fondest wish at that time, but a few years later I resigned my regular commission and transferred to the Selected Reserve. I’d decided there would be no more Lebanons, no more splendid little wars, and no more adventures of the kind in which regulars get involved. As a reservist, I figured, I’d only be called up only for something major—something with a clear purpose.

Twenty years later, on March 21, 2003, I crossed the line of departure from Kuwait into Iraq.