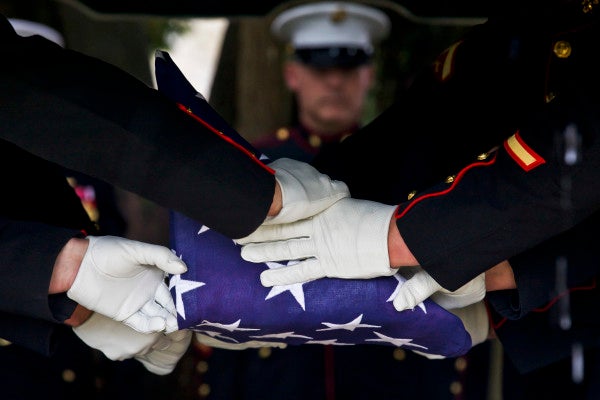 SUTHERLAND, Iowa — The remains of a Marine who was born in Sutherland and killed in World War II have been identified.

A member of Company D, 1st Battalion, 6th Marine Regiment, 2nd Marine Division, Fleet Marine Force, Jenks was killed on either Nov. 22 or 23, 1943, during the third or fourth day of battle on Betio, a small island in the Tarawa Atoll of the Gilbert Islands, now part of the nation known as Kiribati, in the Pacific Ocean.

Jenks was born Dec. 15, 1922, in Sutherland to Arthur and Margaret Jenks. The family moved to Huron, South Dakota, at some point when Jenks was a child.

According to the South Dakota WWII Memorial website, Jenks worked for farmers, the Northwestern Railroad and at Daum's City Auditorium in Huron before joining the U.S. Marine Corps Reserve in Aberdeen, South Dakota, on his 20th birthday. He was sent overseas on April 6, 1943, and served in a mortar platoon.

Betio was the first battle action in which Jenks served.

Jenks' body was believed to be buried in an area named Cemetery 33 on Betio, according to the DPAA, but his remains and those of others killed in the battle could not be located after the war. In 2009, History Flight, a nonprofit organization, located Cemetery 33. In 2019, a burial trench was discovered near the cemetery, and the remains of Jenks and others were recovered.

Jenks was one of approximately 1,000 American Marines and sailors killed at Betio, according to the DPAA. More than 2,000 were wounded during the battle, which annihilated a Japanese force of 4,500 that had occupied the island.

Though costly in American lives, the victory at Betio provided the U.S. Pacific fleet a base from which to launch assaults on the Marshall and Caroline Islands in an island-hopping campaign that continually drew nearer to Japan as the war progressed and ultimately ended with the U.S. victory.