A Marine Corps reserve unit that hoped to hold its annual ball at President Donald Trump's Mar-a-Lago club is now desperately seeking a new venue — and time is running out. 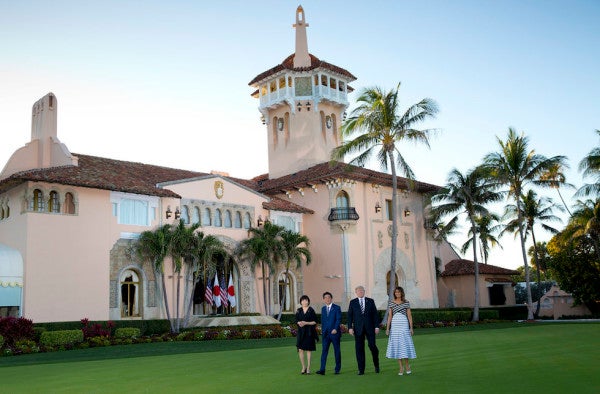 MIAMI — A Marine Corps reserve unit that hoped to hold its annual ball at President Donald Trump's Mar-a-Lago club is now desperately seeking a new venue — and time is running out.

The event had originally been scheduled to take place at the president's club in Palm Beach on Nov. 16, as the Miami Herald was first to report last week. But the possibility that members of the 4th Air Naval Gunfire Liaison Company (ANGLICO), a Marine unit stationed in West Palm Beach, might be seen as taking a political stance and enriching the commander in chief led to a public outcry.

An order to “find another venue” was handed down that same day, according to a 4th ANGLICO officer involved in planning the annual Marine Corps Birthday Ball. Easier said than done, especially at the start of Palm Beach society's high season.

“We've looked at The Breakers (resort) in Palm Beach, other hotels, everything is locked out, everything is booked in advance,” said the officer, who was not authorized to talk on the record. “This was going to be the grand poo-bah of balls. Everyone was going to come out proudly and say we had our ball at Mar-a-Lago. It would have been a huge morale boost. The Marine Corps ball is better than Christmas for us. It's Christmas, New Year's and our birthday all rolled into one.”

Active-duty troops generally express more support for Trump than the broader public, according to polling by the Military Times. But the unit's decision to choose the Winter White House was not political, the 4th ANGLICO officer said. Rather, he said, the club was conveniently located and offered a fair price. And it seemed like a once-in-a-lifetime chance for the ball, which individual units hold every year to celebrate the Marine Corps' founding.

“We chose Mar-a-Lago because we had a unique opportunity to have our birthday ball at the venue of a sitting president, the part-time home of a sitting president,” he said. “We're an apolitical organization but that's our commander in chief. It would have been an honor. The whole purpose of this is for the junior guys. Can you imagine walking into Mar-a-Lago with your girlfriend on your arm? Can you imagine what that does for the heart of a young warrior?”

Funds are raised privately to pay for the ball and no taxpayer money was to be spent for the 4th ANGLICO event, according to a Marine Corps spokesman. Parties at Mar-a-Lago can cost tens of thousands of dollars.

Based on official guidance from Marine Corps Reserve Forces, units are authorized to use taxpayer dollars, in terms of time spent and government equipment, to support the official portion of the celebration, which involves a military presentation honoring the Marine Corps' past. All aspects of the balls are required to meet the standards of being “above reproach,” the guidance says.

Part of that propriety requires ensuring that the military remain apolitical, said retired Air Force Maj. Gen. Charlie Dunlap. Dunlap spent 34 years in the Judge Advocate General Corps and now serves as the executive director of the Center on Law, Ethics and National Security at Duke University. Even if the choice of Mar-a-Lago was made by Marines in Florida without politics in mind, it may not be viewed that way by the general public, he said.

“Given today's hyper-politicized atmosphere — not to mention the upcoming election year — it makes a lot of sense for private or non-appropriated fund organizations primarily associated with the still-serving military to avoid anything that would reasonably raise questions about partisanship, even if the activity were legal and is cleared by ethics officials,” Dunlap said.

The officer said the unit reached out to Mar-a-Lago staff earlier in the year about hosting the Nov. 16 ball and had struck a verbal commitment. The 4th ANGLICO was preparing to put down a 25% deposit just before the Herald story was published. He said the decision had passed a legal and ethics review.

“We did this the right way,” he said.

Perhaps without intending to, the unit walked into a political minefield.

They have also noted that the president may be using his office to enrich himself both through taxpayer and private spending. Politico recently reported on Air Force crews being put up at a Trump hotel in Scotland on the public's dime. And Trump has hosted foreign leaders at Mar-a-Lago and has said he would like to hold the Group of Seven summit at his resort in Doral.

As the 2020 presidential election intensifies, the number of public events where the entire military — not just the Marines — will need to use extra scrutiny is likely to increase, a Marine Corps official who spoke to the Miami Herald in Washington said. Right now, the services are making their own calls on what is deemed appropriate, the official said.

“If this is seen as an issue, it would be helpful if (the Office of the Secretary of Defense) put specific guidance out,” the Marine Corps official said.

In a Pentagon news conference with reporters in August, Defense Secretary Mark Esper was asked about recent campaign events where troops have been photographed wearing political hats or buttons, and whether he was concerned about it as the country moves into an election year.

“My commitment is to keep this department apolitical,” Esper said. “And, of course, we have rules and regulations throughout the services that say you can't wear political items on a uniform, etcetera … and we will continue to enforce those standards.”

In South Florida's tight-knit community of veterans and their supporters, those concerns don't register in the same way.

“I guess I don't understand what all the hubbub is about,” said Patrick Kerney, a prominent South Florida contractor who has helped sponsor previous balls and plans to do the same this year. “It's a shame. Here you've got young guys who've risked their lives so you can and I can hold this conversation and it had nothing to do with making a political statement. It was about the sheer joy of dining where heads of state and presidents of nations have wined and dined.”

The event would have included a cocktail hour by the pool, hors d'oeuvres, an official ceremony, dinner and an open bar and dancing. A table is set aside to honor prisoners of war and those missing in action. As part of the ceremony, the oldest and youngest Marine in attendance cut a cake. Active-duty Marines, veterans and guests are invited. Between 650 and 700 people were expected to attend. A second source familiar with the unit's planning said he had seen flyers printed for the ball, with the location listed as Mar-a-Lago.

Maj. Roger Hollenbeck, a spokesman for Marine Forces Reserve, did not acknowledge how close the unit came to booking the president's club.

“They are looking for a venue still,” Hollenbeck said. “As of now no venue has been chosen.”

He also said a legal review had been done only after the Herald story, and that review found no legal reason the venue could not be used.

Tickets for the ball were expected to be priced at roughly $125 for officers, $100 for non-commissioned officers, and between $40 and $50 for junior Marines. The Black Pearl, a pipe-and-drum band composed of South Florida firefighters, was planned to provide some of the entertainment.

Mar-a-Lago had a down year in 2018 as major charities canceled galas thanks to the president's statements on race. Rates have fallen, opening the door to groups like the Marines that had never held events there before. Previous balls took place at the Broken Sound country club in Boca Raton and other ballroom-style settings in South Florida.

The Palm Beach Police Foundation, which supports the Town of Palm Beach Police Department, has for years held a Policeman's Ball at Mar-a-Lago. And the Navy SEAL Foundation also hosts an annual fundraiser there. At the most recent gala, Navy SEALs “parachuted from a plane, jumped out of a helicopter, and rose silently from the water to rescue a fictitious ambassador in a mock hostage-taking,” according to the Palm Beach Daily News. The April event reportedly raised $1.6 million.

The 4th ANGLICO is a company-size unit with roughly 250 members. Its purpose is to coordinate air support and artillery fire with ground forces. Detachments serve overseas. Members call themselves Anglicans.

In South Florida, many of the Marine reservists work as law enforcement officers, firefighters and paramedics.

“The ball is a time-honored tradition,” said Kerney, the local businessman. “They're good people and they deserve this.”