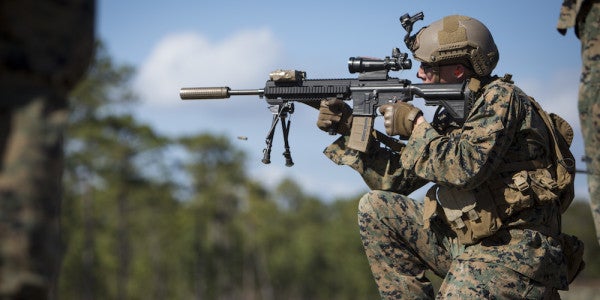 The Marine Corps is capping off 18 months of overhauling the way infantry units are trained and equipped by shaking up the structure of the rifle squad.

In an address to an audience of Marines at a Marine Corps Association awards dinner near Washington, D.C., on Thursday night, Commandant Gen. Robert Neller said future squads will have 12 Marines, down from the current 13.

But while the squads are losing a body, they will gain capability, with two new leadership positions, he said.

“That 4th Marine that we're used to having is not going to be cut,” he said. “We're not going to fill that billet, but it's not going to degrade your readiness. Because if this doesn't work, and you need to go somewhere where you need four Marines in a fire team, we'll bring that Marine back.”

Marine leadership has been debating changes to the size of the infantry squad since 2016, using a designated experimental infantry unit, 3rd Battalion, 5th Marines, to model various configurations and added weapons capabilities. The service reportedly was considering a squad as small as 11 Marines or as large as 14.

Neller told Military.com the final decision was made after talking to infantry squad leaders and commanders and considering his own experience in the community.

“Everything we want to do has to be reversible,” he said. “It's easier to add a person to your fire team than it is to break two fire teams back into three.”

Meanwhile, Neller said, squads will also build into their structure an assistant squad leader and a squad systems operator, allowing the unit to operate with greater independence and manage a growing suite of advanced technology, including unmanned aerial systems.

These positions will be filled at the squad's discretion, Neller indicated. The systems operator might be the most technologically capable infantryman in the squad, he said, while the assistant squad leader would most likely be the next most senior Marine after the squad leader.

In addition to major equipment upgrades that include M27 infantry automatic rifles for every member of the squad, suppressed weapons, and new configurations of existing weapons systems, infantry units will use smart tablets to help them orient and communicate across an increasingly distributed battlefield.

And the changes are not stopping there.

In a December interview, Neller said these adjustments were made with an eye to the weight being added to infantry units and the trade-offs that needed to be made.

“As our gear is bigger, it's gotten heavier,” he said. “So it's minor adjustments.”

Chief Warrant Officer 5 Christian Wade, the former gunner for 2nd Marine Division who retired in February, told Military.com earlier this year that he approved of the coming changes to unit weapons holdings.

“We need to get lighter and more mobile,” he said. “Relative to the Javelin, the TOW is heavier and more bulky … Maybe the first step in shocking the system is to shake up the foundation of the structure.”

Neller said Thursday night that Javelin and 81mm mortar systems would also be receiving a new piece of gear: Polaris MRZR all-terrain vehicles, small enough to fit in an Osprey but large enough to carry weapons and troops as units move around.

Some of these changes are already paid for, Neller said: The Marine Corps already has contracts with Polaris for some MRZRs and plans to increase its order. In April, the service inked a contract with Heckler & Koch for 15,000 M27s, enough to equip every member of the squad and some engineers as well.

Other upgrades, he said, are built into the existing fiscal 2019 budget request or planned for in future budgets.

“I believe these changes will make a significant difference,” Neller said. “The odds that we got every single one of these things right is probably not a good bet. But there's a whole bunch of small bets out there. There's not a single thing out there that's going to make us or break us. And if we get enough of these bets right, it will make us even better than we are today.”