The Marine who helped inspire ‘The Pacific’ has died

For 35 years after his discharge from the Marines, R.V. Burgin kept his war stories to himself. But when he finally broke his silence, he brought World War II to life for thousands of readers in vivid, and often horrific, detail 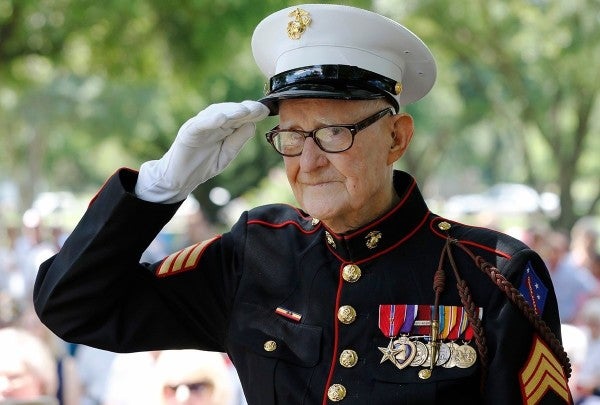 For 35 years after his discharge from the Marines, R.V. Burgin kept his war stories to himself. But when he finally broke his silence, he brought World War II to life for thousands of readers in vivid, and often horrific, detail.

“He didn't hold anything back,” said Bill Marvel, a former reporter for The Dallas Morning News who collaborated with Burgin on his book,Islands of the Damned: A Marine at War in the Pacific.

Burgin, a Lancaster resident, died Saturday at 96. A funeral service is scheduled for 2 p.m. Friday at First Baptist Church in Lancaster.

Burgin's unflinching account of several battles he survived during the war helped inspire The Pacific, a miniseries produced by HBO in 2010.

Marvel initially had no interest in ghostwriting the Marine's memoirs, he said, but that changed five minutes after they met.

“He stood very straight, I mean just as straight as a rifle,” Marvel said. “One of the first things out of his mouth was he didn't want anything sensationalized. He wanted an honest portrait. It didn't take long for me to realize I needed to do this.”

Burgin's book details an unending string of horrors. Ground so thick with bodies that if someone fell down in the mud, his pockets instantly filled with maggots. The constant threat of friendly fire. And in one instance, the intentional killing of a Marine who was uninjured but screaming so loud his companions thought he was sure to attract the Japanese.

There was a time when Burgin didn't want to talk about the war.

“For the first 35 years after my discharge, I never mentioned the war to anyone,” he said in a 2010 interview with The Dallas Morning News. “Not to my wife, not to my kids, not to my co-workers — not even to any of my fellow Marines.”

But he had a change of heart after meeting with some of those Marines, men like Charles Richmond.

Burgin and Richmond fought in some of the same battles, but the two never met. Like Burgin, he kept his family and the war separate.

But Richmond's son, Jim, had a hunger to learn about what his father went through and discovered a scrapbook after his death detailing his days fighting in the Pacific.

Then Richmond tracked down Burgin.

“I had a bunch of questions for him that my father wouldn't answer,” said Richmond, an Allen resident who is retired from the heating and air-conditioning business.

Burgin answered them all, often providing grim details backed up by the scrapbook Richmond found.

Though the two men met late in Burgin's life, the Marine didn't hesitate in sharing his experiences with Jim Richmond. The two would meet at a Lancaster restaurant — where everyone knew Burgin, Richmond said — and talk about a range of topics.

“I think he was a kind and gentle person, but there is a raging warrior there that you did not cross,” Richmond said.

Once his book was published, Burgin became a fixture at veterans events and was one of seven grand marshals in the 2015 Dallas Veterans Day Parade.

“He was always well thought of,” said King Moss II, chairman of the 2015 parade. “The thing that struck me was how he presented himself. He was always sharply dressed in his Marine dress blues. He carried himself with a lot of discipline and he was always proud.”

He was captain of the football team at Jewett High School and worked as a stationery salesman after he graduated.

Burgin met his wife, Florence, in Australia before he was shipped off to war. The two didn't marry until after he returned, and even then, he threw a brief scare into her when his train was late arriving.

During World War II, Burgin was assigned to the 5th Marine Regiment, 1st Marine Division and entered the war with advanced mortar training.

“He was proud of the way he could lay in a mortar shell and aim it just right and fire it right where he wanted it to go,” Marvel said. “It was as close to boasting as he ever came.”

Burgin's Pacific battles took him to Cape Gloucester, Peleliu and Okinawa. He received the Bronze Star near the end of the war in 1945 for destroying Japanese guns that had Marines pinned down.

After the war, Burgin worked in Dallas for the U.S. Postal Service. He also had a lifelong love of hunting, fishing and gardening.

He was preceded in death by a brother, Joseph Delton, who was killed in France during World War II; and sisters Lois Williams and Ila Minkler. His wife died in 2011.

During their final visit, Burgin took Richmond to a cemetery in Lancaster.

“He said, 'I want to show you something. Take a left here,'” Richmond said, “We walked to his wife's grave, and he said, 'This is where I'm going to be buried.'”

After Burgin's memorial service Friday, burial will follow at Rawlins Cemetery in Lancaster, where Burgin will be laid to rest next to Florence.

SEE ALSO: Why 'The Pacific' Is Legions Better Than 'Band Of Brothers'

WATCH NEXT: Why 'Band Of Brothers' Sucks