Walla Walla police Officer Nat Small announced Wednesday he will alter his tattoo to remove the double S portion, the Scout Sniper memorial he has worn since 2010 that has been under recent community fire as a symbol of neo-Nazism 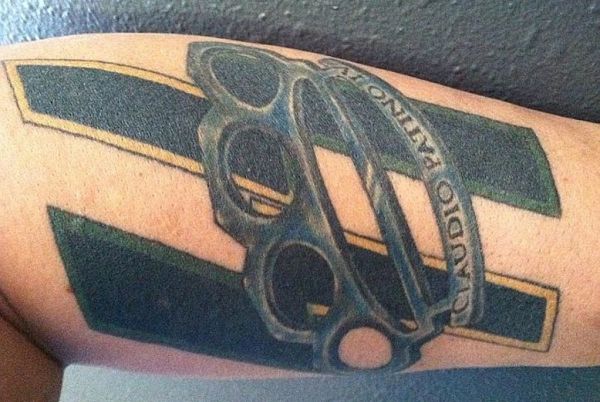 Walla Walla police Officer Nat Small announced Wednesday he will alter his tattoo to remove the double S portion, the Scout Sniper memorial he has worn since 2010 that has been under recent community fire as a symbol of neo-Nazism.

In the letter Wednesday released by the city, available in full online at ubne.ws/officersmall, Small said he will alter his tattoo, which features brass knuckles over the double S and includes the name of his fallen comrade killed in 2010 in Afghanistan.

His decision — which he stated in the letter was made without pressure from the city or his superiors — was not enough for everyone originally concerned about the symbolism of the design, however.

Members of the Military Religious Freedom Foundation, which threatened a lawsuit several weeks ago when alerted to the tattoo, said they may still file a federal suit if Small doesn’t disclose how he plans to alter the tattoo and when.

The group’s spokesman, Michael Weinstein, also called for Police Chief Scott Bieber to be fired for wrongful exercise of his authority and wrongdoing in his response to the outcry surrounding the tattoo.

This morning, Bieber told the U-B he wasn’t aware of any communication from the foundation.

“We don’t answer to Mr. Weinsten, and that’s all I have to say,” Bieber said.

He added he would discuss the matter more in today’s 6:30 p.m. virtual town hall set by City Council. Additional details about the situation, including the city’s policy on employee tattoos and background information regarding Small’s service with the Walla Walla Police Department, also will be discussed.

Related: A Washington town is protesting its police department over a Marine veteran's 'Scout Sniper' tattoo

Small has been a police officer since November 2018, but was a Scout Sniper in the U.S. Marine Corps beforehand, when he was sent abroad to fight for the U.S.

The double lightning bolt SS tattoo was informally adopted by some members of the elite group. But it has also been highly criticized as the same Schutzstaffel symbol used by the Nazi Party and now neo-Nazis. In 2012 it was denounced by the Marine Corps.

The Military Religious Freedom Foundation, a private nonprofit civil rights advocacy organization, in June threatened a federal lawsuit against the Walla Walla Police Department and others responsible if one of three things didn’t happen: removal of the tattoo, alteration of the tattoo or removal of the officer from duty.

Weinstein said in an email after Small’s announcement that his organization had not decided yet to pull the plug on their planned federal lawsuit but “guardedly commends Walla Walla police Officer Nat Small for his just-announced decision to remove the hideous Nazi SS symbol from the prominent tattoo on his left forearm.”

He said the organization and its local Walla Walla clients needed to see the new design, know when he would have the alteration made and witness action taken against those who allowed the tattoo in the first place, specifically the police chief.

Small said in the letter Wednesday that in his younger years he “might have done anything to keep” the ink and “would have let pride interfere with” his success. He also said he didn’t make the decision to alter the tattoo to “avoid punishment or financial losses.”

“My actions are my actions alone, and not out of fear of repercussions, but rather in an honest effort to bring healing and unity to the community that I serve, in a time of great division … I have seen my community divided, with good people on both sides of the aisle,” he wrote in his letter.

“Neighbors have turned against each other and people are refusing to do business with those whose opinions differ. I regret that I have been an unwitting cause of division in the community that I seek to serve. For those reasons, I have decided to alter my tattoo to eliminate the ‘Double S’ portion.’”

The city of Walla Walla stated in its release that it appreciated Small’s “sensitivity to the concerns raised by members of the community, and welcomed his decision to change his tattoo to better uphold the trust residents place in him as an officer in the Walla Walla Police Department.”

“We regret the fact Officer Small’s tattoo has contributed to divisions within the community, and we hope his decision to change it will help to unite — rather than untie — us,” he said in the release.

Weinstein said his organization has clients representing various Jewish, LGBTQ, people of color and related communities in Walla Walla who expressed disappointment “that the city allowed this issue to go on so long and especially the role of the Police Department headed by the blatantly incompetent police chief, Scott Bieber.”

After the organization and several community members did not get a response to their initial concerns about the tattoo, a protest was planned last month, but the event was flooded with supporters of local law enforcement instead.

Bieber gave a short speech to his crowd of supporters that June 24 evening. “If anybody here is from the paper, I know it’s after 5 o’clock, so I’m on my own time,” he said. “And when I became a police officer over 35 years ago, I did not give up my First Amendment right and neither did Nat Small.”

He also said, “I’m not going to lie to anybody and say we are perfect. There’s only one person that walked the face of the earth that was perfect.”

Ultimately, Weinstein said, his organization and clients in Walla Walla want Bieber fired for both misfeasance and malfeasance for his actions.

“MRFF and our Walla Walla clients were horrified by the police chief’s blatant Christian proselytizing from the back of that vehicle during the recent public protest and where he made it clear that only one person in human history was ever ‘perfect’ who walked the face of the earth; obviously a direct reference to Jesus Christ,” he said.

Read next: The US military is losing the sniper war against Russia