Tyler Prudden, 30, was sentenced to approximately 1-2 years in prison for involuntary manslaughter after pleading guilty to the July 26, 2013 death of Lance Cpl. Lanija Antionne Gilpatrick in 2013 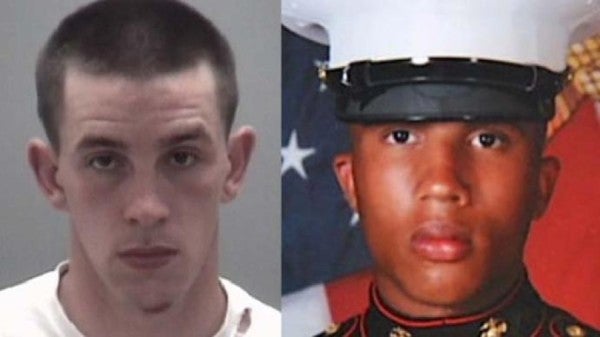 A former Camp Lejeune Marine was sentenced in court Friday for the fatal shooting of his friend.

Tyler Prudden, 30, was sentenced to approximately 1-2 years in prison for involuntary manslaughter after pleading guilty to the July 26, 2013 death of Lance Cpl. Lanija Antionne Gilpatrick in 2013.

Prudden was arrested years after Gilpatrick's death, having originally claimed he had no part in the shooting with later evidence revealing he shot Gilpatrick accidentally.

“He hid the fact that he was the one who actually shot (Gilpatrick),” Stuart Popkin, Prudden's attorney, said after the sentencing. “It's a difficult case in that there's someone that died and your client is the one all the fingers are pointing at … He decided to accept responsibly and not go through a trial.”

“Nothing that we do in court brings this young man back,” Roupe said after the sentencing. “But as far as what the law can do, the judge did.”

According to Roupe, Prudden, his then-wife Lori Green Prudden and Gilpatrick were relaxing at the Pruddens' home at the time of the incident. Prudden pointed a gun he thought was unloaded at Gilpatrick's face as a form of jest and fired.

Gilpatrick, 22 at the time, died from complications of a gunshot wound through his eye that exited out the back of his head. The Daily News reported he was unconscious but alive when EMS arrived on scene and was initially doing well after undergoing surgery. He died a few days after the shooting.

The incident was originally ruled an accidental shooting and the case was closed, The Daily News reported.

Roupe explained Prudden and his wife were the only ones present at the shooting, and both at the time said Gilpatrick shot himself accidentally.

According to Gilpatrick's mother Nancy Patterson, Prudden befriended the Gilpatrick family and was a pallbearer at Gilpatrick's funeral. Patterson said she grew to trust Prudden.

Prudden even got a tattoo on his back with Gilpatrick's name and an image of the gates of heaven, according to Roupe.

But in December of 2015, The Daily News reported, the Onslow County Sheriff's Office received an anonymous tip.

According to Roupe, Patterson received a Facebook message from a Kellie John that said, “Your son did not shoot himself. Tyler shot him.” The message was traced to Michigan, where Prudden's ex-wife lived.

“Officially, she denied that she was the one that sent it,” Roupe said, but added she cooperated when law enforcement returned to Michigan to question her. She explained the incident had not happened as she and Prudden first claimed.

Law enforcement officers then set up a controlled call in which Prudden's ex-wife called Prudden to tell him police knew he killed Gilpatrick, according to Roupe.

“He made statements like, 'How do they know,'” Roupe said.

The Daily News reported two deputies were sent to Portland, Michigan, where Prudden lived in an apartment complex, to arrest him. Prudden was arrested without incident in the parking lot with the help of the Michigan State Police and the U.S. Marshal's Fugitive Task Force and was extradited to Onslow County.

According to Roupe, Prudden pleaded guilty on Sept. 20 but the sentencing was postponed so Gilpatrick's mother could be present.

Presiding Judge Josh Wiley, of Carteret, Craven and Pamlico counties, took into consideration Prudden's behavior after the shooting when issuing his ruling, according to Roupe.

While there was no indication of any issues between Prudden and Gilpatrick at the time of the shooting, Roupe said there were warning signs in Prudden's behavior that something like this might happen.

“The wife said he had a history of being reckless with weapons,” Roupe said.

According to Roupe, Prudden had a history of dry-firing weapons at walls and has at least once dry-fired a weapon at another Marine friend of his.

Gilpatrick joined the Marine Corps in August 2010 and was promoted to lance corporal in October 2011, The Daily News reported. He worked as a field wireman. His awards included the Global War on Terrorism Service Medal and the National Defense Service Medal.

“He loved his family. He loved his friends,” Patterson said of her son. “He had his whole future ahead of him.”

And while Popkin and Roupe agreed the sentence Prudden received was fair, Patterson said she thought Prudden got off “really, really easy.”

“I had to bury my oldest child,” Patterson said.