Marine Vet On Election: ‘Our World Cannot Afford For Us To Get This Wrong’

A Marine veteran from San Diego told the Democratic National Convention Wednesday that Hillary Clinton would be a trusted commander... 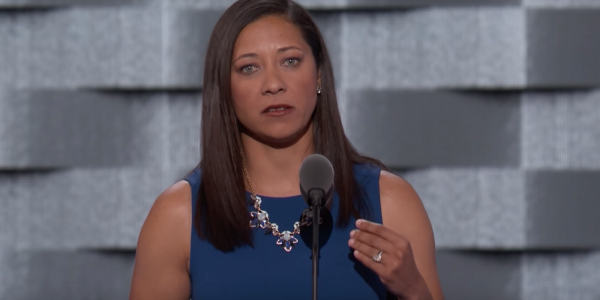 A Marine veteran from San Diego told the Democratic National Convention Wednesday that Hillary Clinton would be a trusted commander in chief while contending Donald Trump would create more danger for U.S. military forces.

“This election isn’t just about Donald Trump’s judgment, it’s about our own,” Kristen Kavanaugh, who had achieved the rank of captain, said in a four-minute speech at the Wells Fargo Center in Philadelphia.

“Our troops, our nation, our world cannot afford for us to get this wrong.”

Kavanaugh said that when she was deployed in Iraq, she and other Marines took indirect fire from the enemy and U.S. artillery battalions and other units quickly launched counterattacks.

“I trusted them with my life. I trusted that my commanders had the right strategy. I trusted that we were abiding by the rules of engagement even when our enemy chose not to,” she said. “That trust starts at the top of the chain of command and I trust Hillary Clinton to be commander in chief.”

In personal terms, she expressed fear of what impact the Republican nominee as president would have on service members.

She was one of a series of speakers, including former Secretary of Defense Leon Panetta, to talk about national security on Wednesday night. They spoke just ahead of the night’s biggest names: Vice President Joe Biden, nominee for Vice President Tim Kaine, and President Barack Obama.

She spent the last decade working as an advocate for service members through the Military Acceptance Project, and for a multifaceted approach to national security with Truman National Security Project.

Kavanaugh was a midshipman at the Naval Academy and a closeted lesbian during the era of the era of Don’t Ask, Don’t Tell, the since-rescinded policy that prevented non-straight service members from serving with their sexual orientation in the open.

As did many other men and women in uniform, Kavanaugh said she hid her orientation and dodged questions about relationships.

She left the military in 2007 and in 2010, while studying social work at the University of Southern California, founded the Military Acceptance Project. At the time the organization focused on serving on gays in the military. But after she graduated, Kavanaugh and other students broadened the project’s objectives to reach out to others who had trouble relating to their peers in uniform for reasons of sexuality, ethnicity, race, religion or personal trauma.

In 2014, she co-founded and became the co-director of the San Diego chapter of the Truman National Security Project. Her work in this organization got her the invitation to the convention podium. Shawn VanDiver, the other co-director of the Truman Project, said the think tank includes policy experts and professionals that focus on diplomacy, development, democracy and defense issues.