Seven marathons. Seven continents. In seven days? Physically and logistically impossible. No way. “Oh … it can be done,” said... 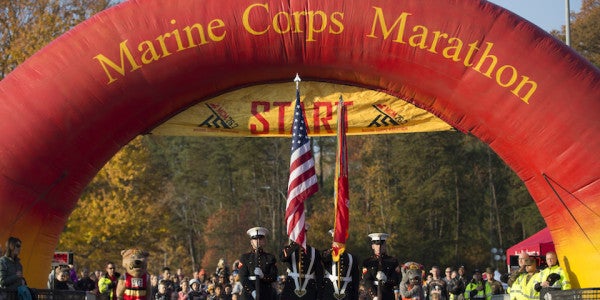 Physically and logistically impossible. No way.

The retired Marine major living in Suffolk should know. On Jan. 31, she completed the challenge in a Guinness Book of World Record time of seven days, three minutes and 27 seconds. The previous best seven marathons on seven continents for a woman was 10 days, 23 hours, 30 minutes and 40 seconds.

Participants in World Marathon Tour events do it faster, she says, but “they have a charter plane, chefs and medics. They basically relax, recover, arrive and get out of the plane and run before heading on to the next made-up run.”

Because of that, their times aren’t recognized by Guinness for world record status.

Davis, 47, and seven others ran in regularly scheduled marathons with hundreds of others, adding to the logistical challenge of the journey.

“We were an hour late getting to Cairo (Egypt) and literally had to sprint to the starting line as the race was starting,” said Davis, who coordinated the runs with a handful of other enthusiasts. “So we almost didn’t make that one, and that would have ruined everything.”

Cairo was the third leg in a woman-against-herself test that started in Perth, Australia, for the Australian Continent. From there is was on to Singapore (Asia), Cairo (Africa), Amsterdam (Europe), New York (North America) and Chile (South America). The finisher: the White Continent Marathon in Antarctica.

And for good measure, and because she couldn’t get a flight out for a couple of days, she ran an eighth marathon in Chile before heading home.

Davis’ husband, William Perez, paid $14,000 for entry fees that included the $8,000 price tag for the Antarctica run. That event had a built-in airfare, but Davis said she paid $22,000 for the remainder of the plane rides so she could sit in first class, where she’d have a chance to get as much rest as possible.

She says the task of taking care of herself during the adventure was tougher than running 26.2 miles every day for a week.

“You don’t get quality sleep on a plane,” she said. “Nutrition was difficult and recovery from race to race wasn’t like it needs to be. But if the Marines taught me anything, it was how to fight and push through.

“You know how they talk about hitting the wall (during a marathon)? This whole experience was a wall.”

Davis joined the Marines as a private when she was 17 and living in Chicago.

The Corps afforded her the opportunity to earn a bachelor’s degree in human resources and majors in military studies and organizational management. Her degrees allowed her to become an officer, and she retired in 2010 as a major after 24-plus years of service. She currently works as a financial management analyst in the civil service.

While being a Marine required plenty of personal training and running, it wasn’t until she had her only child at age 30 that she took up distance running to lose weight. A captain at the time, she was inspired to learn that Oprah Winfrey had run the Marine Corps Marathon.

“I had run a few half-marathons,” said Davis, who is now thin and fit, flashing a huge smile and brushing back her bouncy, curly locks. “I enjoyed it. Helped me lose weight and manage stress. If Oprah can run a marathon, I could.”

“It’s my go-to thing no matter what’s going on,” Davis said of running.

Before taking part in her latest challenge, Davis had already finished more than 100 marathons and once had completed six in six states in six days.

“I knew I could do back-to-back-to-back,” she said. “So the running portion wasn’t that difficult. The hard part was the flying and sleep deprivation. Flying makes your feet swell and running with swollen feet was very difficult.

“But you have to trust your training, and I was able to pull it off.”

Despite the grueling event, Davis said she’d likely try it again. But that’s if she is done with longer, tougher challenges.

Davis last September became a member of the 50 States Marathon Club. She has already completed 24 ultra-marathons (31 or more miles) and has finished off a pair of 100-milers.

And if she can handle the sub-freezing, wind-blown and rocky terrain of Antarctica, she figures nothing can stop her.

She’s currently training while undergoing knee therapy – that’s right, she does all this on a bum knee – so she can compete in the Great Wall of China Marathon.

“All I’m sure about with that one is that there are 5,154 stairs to climb and that’s rough on my knee,” said Davis, who donates all of her $1,700-a-year worth of running shoes to an African charity. “The key for me is that I’m not a speed runner. My fastest marathon time is 3:59 in the 2005 Marine Corps Marathon. I run relaxed so that I can recover easier.”

After the Great Wall, Davis thinks she wants to complete ultras in all 50 states and maybe 100-mile events in all of them after that.

“My family thinks I’m completely off my rocker,” Davis said. “I guess I’m kind of a freak when it comes to running.”