An 18-year-old North Side man who was arrested Friday night is suspected of “punching and pushing’’ a 29-year-year-old Marine veteran into the path of a CTA train, killing him Tuesday in the Loop, Chicago police say 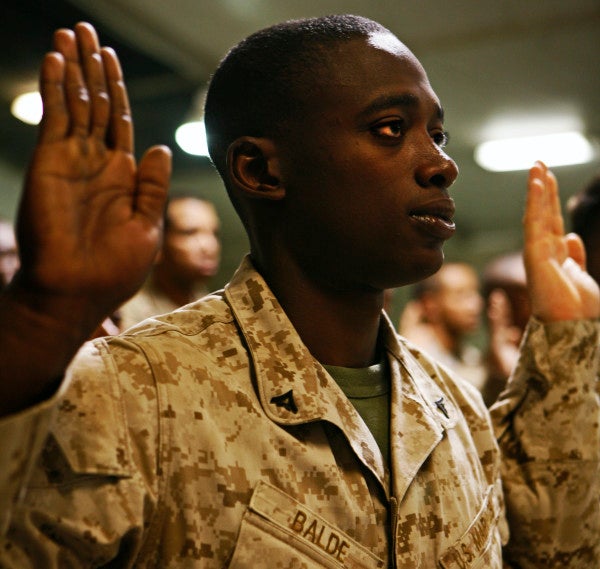 An 18-year-old North Side man who was arrested Friday night is suspected of “punching and pushing’’ a 29-year-year-old Marine veteran into the path of a CTA train, killing him Tuesday in the Loop, Chicago police say.

The man was taken into custody at his North Center neighborhood home by the Great Lakes Fugitive Task Force about 8:20 p.m. Friday without incident, according to police.

He was identified by witnesses as he “punched and pushed’’ Mamadou Balde into a passing CTA train and he was killed, according to a police report.

The arrest was the man’s first and police have not announced any charges.

Tuesday evening about 5 p.m., Balde was waiting for a train at the Jackson Red Line stop when three people started arguing with him, according to police at the time.

Surveillance video apparently shows Balde walking away from the confrontation when one of the three ran up and pushed him off the platform and into a moving train, killing him. He was 29.

“He didn’t want to fight,’’ his father Al Balde said he was told by officers who saw the video. “Yes, I am mad, that is correct. … This guy gave his life for his country and three people throw him on the train.’’

Chicago police say Balde fell between two cars of a train that was pulling away from the station and was dragged to his death. An autopsy the next day determined Balde died of multiple injuries he received when he was pushed into a moving train, according to the Cook County Medical Examiner’s office. His death was ruled a homicide.

Earlier, police said they identified three people of interest, and at least one of them had been involved in crimes in the Chicago downtown area, according to a law enforcement source.

The Jackson platform and an adjoining commuter tunnel have been the scene of several violent attacks recently, including a fatal shooting and a stabbing earlier this year. The increase in violence led to an increased police presence at CTA stations.

The attack was among eight homicides recorded in Chicago Tuesday, the deadliest violence the city has seen in a single day for nearly two years.

Balde lost his mother to cholera when he was 3, moved from West Africa when he was 9, joined the Marines when he was 18 and served two tours in Afghanistan.

“He told me that they (Marines) made him a man,’’ Al Balde said. “He never called me sir, and when he came back home he called me sir.’’

After his second tour ended in 2015, Mamadou Balde struggled with PTSD, his father said. “It was crazy over there,’’ he said. “He told me a lot. He told me things had haunted him.”