"Just having to let go, to end this bond, is hard. You can't just expect it to disconnect like a plug from a socket." 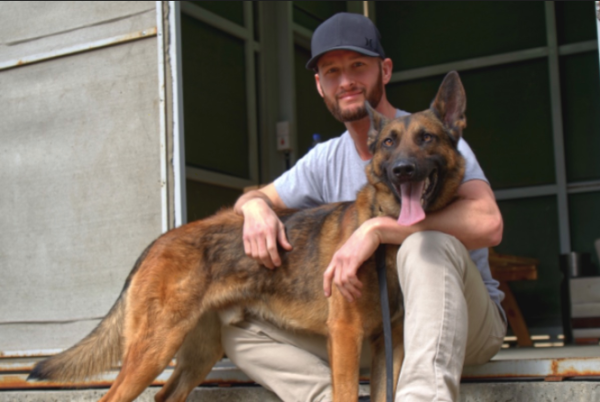 A Marine Corps veteran is fighting to keep a bomb-sniffing dog he said he has spent “almost every second” with for the past year at the U.S. Embassy in Kabul, Afghanistan, as their deployment together comes to an end this week, even though it would be a breach of protocol.

Defense contractor Constellis hired Richard Pickett-White through a subsidiary to help dogs like Abel, a herding dog known as a Belgian Malinois, pass a certification process proving he could sniff out deadly explosives. Pickett-White and Abel, who were paired together several months before heading overseas, were never intended to go home together. But the former Marine said he and the dog have developed a strong connection that he's not ready to break.

“Just having to let go, to end this bond, is hard. You can't just expect it to disconnect like a plug from a socket,” Pickett-White said over a video call from his 85-square-foot room in Kabul. Abel, who resembles a German shepard, sat by his side throughout most of the interview.

Pickett-White first contacted the security firm about the possibility of purchasing Abel late last year, when their pairing was initially expected to end. Constellis officials said they communicated a negative response. In February, Pickett-White launched a GoFundMe to raise $25,000 to offer to the company — a figure he said far exceeds Abel's market value. He has raised nearly $30,000 to date.

Top-brass at Constellis say Abel — like all of their dogs — is simply not for sale.

There's nothing legally barring the sale of such a dog, but “it would set a terrible precedent for us,” said Gary Moore, the firms's chief legal officer. “It's not industry standard. And it's not how these dogs work.”

Acknowledging the business and logistical concerns tied to his ask, Pickett-White said, “There are some special cases, and I feel that we're definitely one of them. I've tried to convey the evidence that this isn't just a normal dude — he's my dude.”

Barring unforeseen circumstances, Pickett-White and Abel will soon board a plane together and arrive in Washington, D.C. on Friday evening. It's there that they are slated to separate — possibly forever.

Under the terms of Pickett-White's contract with Constellis, which runs until May of next year, he is set to go on a short leave and then return to Afghanistan to begin where he left off with a different dog, Constellis officials said. Due to a change in the way government contracts are handled, Abel is no longer eligible for the same service, according to Pickett-White. Without Abel, Pickett-White is no longer sure he wants to deploy again.

Constellis officials declined to go into details about the contracting process, but said Abel could still do important work — whether in the United States or abroad. They added that nothing had changed in their contract with Pickett-White as of Wednesday, and he had not communicated a desire to end his employment.

Once Abel is set to retire from his specialized work — which Constellis officials said depends both on the dog's age and personal desire to work — he will be made available for adoption, according to company policy. His previous handlers, including Pickett-White, would be given the option of first refusal. Pickett-White estimates Abel, who just turned 3, won't retire for another four years.

It's common for handlers and their dogs to develop a close relationship, but there's a business element inherent to the profession, according to Ohio-based police dog trainer Paul Shaughnessy, who was not familiar with Picket-White's situation and spoke generally.

“Their dog becomes their confidant, they get this great bond, and it's a wonderful thing,” Shaughnessy said. “It's just that in this situation, that dog belongs to the company. He signed a contract.”

Zach Skow, owner of Marley Mutt's Dog Rescue in California, shared Pickett-White's campaign with the nonprofit's 214,000 Instagram followers on Memorial Day to raise awareness. Despite the extenuating circumstances, Skow is not convinced it has to be so cut and dry.

“I think there's there's room to be more empathetic, especially when you're talking about veterans who fought in this country,” said Skow, who runs programs that connect dogs with marginalized populations.