A US Marine veteran built a massive cocaine pipeline as a Mexican drug kingpin, prosecutors say

A U.S. Marine veteran who rose to power as a reputed Mexican drug kingpin has been named in a massive cocaine-trafficking indictment in San Diego 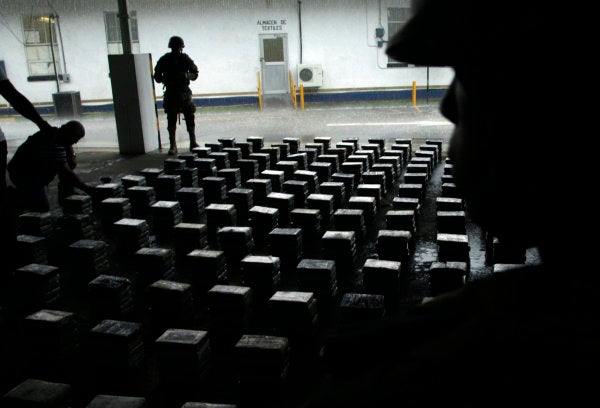 SAN DIEGO — A U.S. Marine veteran who rose to power as a reputed Mexican drug kingpin has been named in a massive cocaine-trafficking indictment in San Diego.

More than 41 people have been charged in the case, which has yielded 5,000 kilograms, or about 11,000 pounds, of seized cocaine and more than $9 million in drug proceeds.

Dominguez's organization sourced cocaine from Peru, Venezuela, Ecuador, up through Central America and into Chiapas, Mexico, according to prosecutors. Transportation cells would move the cocaine into Mexico using boats, aircraft and commercial vehicles, then over the California and Texas borders for distribution into the United States, the court filing says.

The organization also used a reverse pipeline to move drug proceeds from the U.S. back south, according to the indictment, which was partially unsealed this week.

Dominguez, arrested in Mexico in 2016, is awaiting extradition to San Diego.

He is a dual U.S. citizen who has served as a Marine, prosecutors said. According to his U.S. passport application, he walks with a limp due to a combat-related injury.

Dominguez is accused of using his military training while working as an original member of the Los Zetas paramilitary cartel, which was first formed as an enforcement wing for the Cartel del Golfo. He was known as “Zeta 39,” prosecutors said, no doubt informing the name of his current organization, El Seguimiento 39.

Prosecutors said he built his organization through cooperative alliances with the Beltran Leyva Organization, the Cartel de Jalisco Nueva Generacion, the Sinaloa Cartel, the Cartel del Golfo and Los Zetas.

Those corrupt relationships were on full display in 2017, when Ivan Reyes Arzate was taken down in Chicago.

Reyes was a top federal police commander and the highest-ranking member of Mexico's Sensitive Investigation Unit. He served as a liaison with U.S. law enforcement officials, privy to sensitive information about some of the most important U.S. investigations into drug cartels.

Turns out, Reyes was leaking the information to the cartels.

The first hint came when the U.S. Drug Enforcement Administration in Chicago asked Reyes' unit to conduct surveillance of a meeting of traffickers in Cancun. Wiretapped communications revealed that someone named “Ayala” — later determined to be Reyes — warned one of the traffickers about the investigation and suggested he lay low.

“You were the target,” Reyes warned.

Scrutiny turned to Reyes as the mole when U.S. agents intercepted a call between Dominguez and another trafficker.

“Who is Ivan?” Dominguez asked, according to prosecutors.

“The boss,” the other trafficker said, apparently referring to Reyes' position in the Mexican police.

Dominguez began to rely heavily on Reyes for information about the overlapping San Diego-Chicago DEA investigation.

At one point, Reyes admitted to meeting with Dominguez in Mexico City. Dominguez had proposed a plan: that he supply the federal police with incriminating information against current drug bosses in the Gulf state of Tamaulipas, Mexico. Once they were arrested, Dominguez could replace them with less violent bosses.

Reyes' leak in the investigation prompted the evacuation from Mexico of a confidential DEA informant — who had been paid more than $1 million for cooperating — for the informant's own safety.

Years earlier, when Reyes worked for the Beltran Leyva cartel, he revealed the identity of one person who had been cooperating with officials, resulting in the cooperator's torture and death at the hands of cartel assassins, authorities said.

Dominguez and another unnamed co-conspirator knew of Reyes' prior relationship with the Beltran Leyva group and threatened to use it as leverage against the police official if they needed to, according to intercepted communications.

Reyes turned himself in to authorities in Chicago in February 2017 and in November was sentenced to 40 months in prison.

As for the Dominguez prosecution, several co-defendants already have been arrested — beginning in July 2017 — and many have pleaded guilty.

The complaint against Reyes in Chicago acknowledged that an indictment had been filed against Dominguez in San Diego but noted that it was sealed. On Monday, his name was finally unsealed along with the names of eight others. The names of more than 25 people charged in the case remain sealed.