Shaun DeWaters took pride in being called an infidel while serving in the Iraq War, but the Kentucky Transportation Cabinet says he cannot display the term on his license plate, according to a lawsuit filed Monday 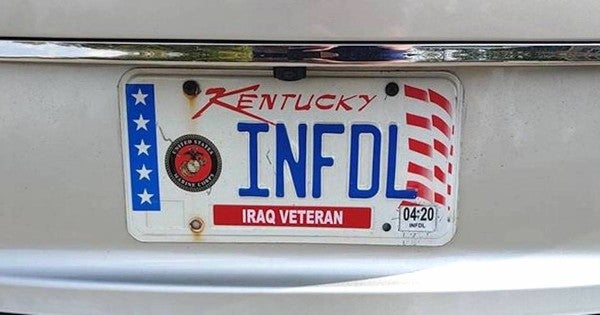 Shaun DeWaters took pride in being called an infidel while serving in the Iraq War, but the Kentucky Transportation Cabinet says he cannot display the term on his license plate, according to a lawsuit filed Monday.

A year after DeWaters was honorably discharged from the Marines in June 2006, he obtained the state's Iraq Marine veteran plate. He had the plate for more than 12 years until he bought a new car this fall, the lawsuit said.

DeWaters planned on transferring his plate to the newly-purchased vehicle. But an email DeWaters received from the Division of Motor Vehicle Licensing, which is in the Transportation Cabinet, said the plate no longer conformed to a Kentucky statute. That law says a personalized plate should not discriminate; represent a political belief; or promote a specific faith, religion or anti-religion.

In an unsuccessful attempt to overturn the DMV decision without going to court, DeWaters said he felt his free speech rights were violated.

“The term Infidel has a totally other meaning to me being a disabled Marine Corps combat veteran,” DeWaters explained, according to the lawsuit. “It has been well documented in the media and literature that the insurgency in Iraq and Afghanistan called American troops infidels. We actually took it as a badge of honor that our enemy had given us this nickname.”

He was ordered to relinquish his plate by Nov. 1, and he was not reimbursed any of the costs he paid to renew it. DeWaters told the transportation cabinet that it discriminated against him, and the lawsuit claims he never received an explanation of why his plate represented a religious, anti-religious or political view.

DeWaters said he did not intend for the plate to offend anyone; the word “Infidel” also is tattooed on his arm to represent the camaraderie among Marine Iraq veterans.

“I've never had anybody ever confront me about the plate being bad,” he said. “I've had many veterans give me a thumbs up, telling me it's the best plate they've ever seen.”

On Oct. 31, DeWaters gave up his Marine Corps license plate and was issued a Kentucky standard license plate, according to court documents.

When he couldn't get Transportation Cabinet officials to change their minds, DeWaters sought legal counsel. According to the lawsuit filed Monday, DeWaters hopes to get his plate reissued, receive compensatory damages and have a judge declare license plate statutes unconstitutional.

The case follows another long Northern Kentucky legal battle that ended earlier this month, when a federal judge sided with Bennie Hart and ordered the Transportation Cabinet to allow Hart to use his “IM GOD” license plate. Bennie Hart's “IM GOD” plate was initially rejected because it was “not in good taste and would create the potential of distraction to other drivers and possibly confrontations.”

A similar case as DeWaters' occurred in 2013 in Michigan, when an Iraq War veteran's “infidel” plate was rejected because officials feared it would offend people, according to CBS Detroit. The Michigan secretary of state's office sided with the veteran and said the rejection was an oversight.