As the War in Afghanistan nears its end, a Marine’s guilt intensifies

“My mind won’t let go,” writes a Marine veteran of Afghanistan. “The farther I get from those days, the heavier my guilt.” 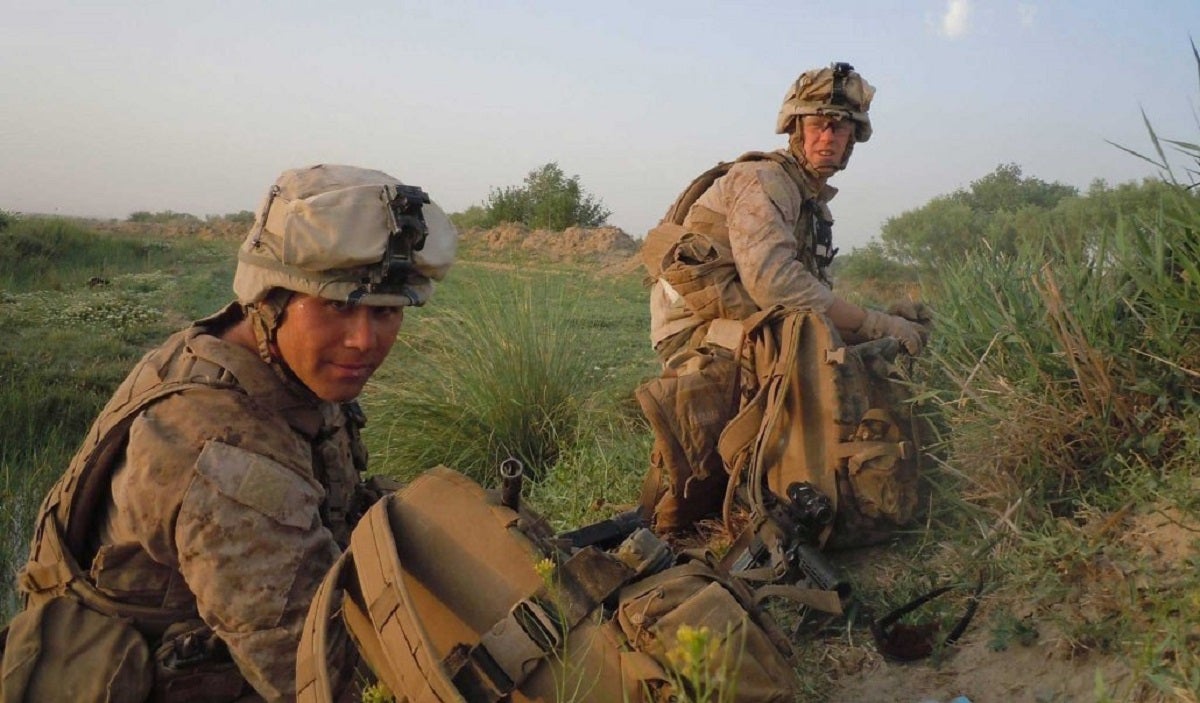 March 2011. God, it was cold. I hate that feeling of endless cold. It sinks into your bones and convinces you that nothing you do will allow you to feel warmth ever again. The rain—sometimes sleet, sometimes hail—destroyed any feeling in my body.

First post at our new patrol base, if that’s what you want to call that 350-square-foot rectangle of Hesco barriers, sandbags, and 14 sweaty assholes. I had the 0200-0600 and 1400-1800 slot, and the only positive was watching dawn and dusk.

It was 0230 and I couldn’t see anything yet. As was so often the case at night, when I actually needed them, my night vision goggles fogged up or went dim. They never seemed able to handle bad weather. When it rained, they’d slowly go dark, and then I’d be blind.

Sweet. Huddled under a poncho, freezing my nuts off, and hearing something out in the distance that I can’t see.

I hadn’t slept in 40-some-odd hours, and I had started to feel the accompanying exhaustion. Of course, everyone rode that edge. But I’d be lying if I said I wasn’t just a little nervous about getting us all killed because I couldn’t see Taliban & Co. sneaking up on us with some godforsaken welcome-to-the-neighborhood present.

Our platoon had found eight IEDs that morning as we moved into the village and began to set up our patrol base. The intelligence sergeant on patrol with us found one with his foot. We got his medevac going, and then we continued the sweep. We spent about 10 hours on patrol, working with explosive ordnance disposal to clear the village and later with the combat engineers to set up the Hescos.

My goggles decided to brighten up and show me the green-tinted world before my night shift ended. The poppy fields were on full display in front of me. They were neat, organized, and looked as if they had been arrayed just for my viewing, like some sort of pleasure garden. The fields appeared peaceful in long rows stretching to the horizon, yet poppies—after being processed into opium—funded the Taliban and many of the opposition warlords. Poppy, then and now, fueled their struggle by keeping the violence at a seemingly otherwise unsustainable pitch for almost 40 years.

The poppy is the one constant in Helmand no matter who’s in charge or who’s fighting. Brits, Americans, Taliban, Pashtun warlords … the poppy farmers wake up day after day and repeat the cycle—plant, grow, harvest, sell—season after season. They’ve been farming since Romulus was sucking on a wolf tit, and there is always a buyer. I’ve heard that it wasn’t always poppy, but it’s been that way for a long time.

The Taliban decided to leave the boys and me alone that night—if they were ever out there. I don’t doubt that they were. If you’re in Afghanistan, you’re being watched. … At least that’s what my squad leader always said. And I tried to listen to what he said; I was just a dumb boot stumbling through the train wreck that was my first deployment.

The people of the Upper Gereshk valley confused me. Willing and even eager to accept our help one day, they might push us away the next, cursing us for bringing the Taliban to their homes. Sometimes I caught myself oversimplifying the issues and problems we faced there. On one hand, I cared because I considered myself a conscientious, intelligent, and (gasp) caring human; on the other, I didn’t care about any of these people, because why should I? I’m an American, they smell, and they don’t exactly love me. I used to think that when I left, I’d never think about them again. I was wrong. On the other other hand, it was not my job to think. My job was to walk long distances with a lot of heavy shit on my back and, when called on, do the whole shoot-move-communicate thing to facilitate mission accomplishment. Which was … fuck. Wow. I don’t actually know what the fuck we were doing there. I don’t know if anyone does.

Fast forward two days, and we were on patrol. Security halt, reestablish comms, blah blah, blah. Suddenly, a high-pitched scream. I turned in the direction of the scream, and around the corner of a compound wall came a little kid—he was maybe seven, maybe five. It’s hard to tell. He ran about as fast as his little legs could carry him. Then, close behind, came a massive dog. It was probably three feet at the shoulders, feral, snarling, and chasing this kid. They ran around the other side of the compound wall and disappeared from sight.

At least that’s what I’ve been telling myself.

The screams died down. We couldn’t see the kid or dog anymore. What seemed like a few minutes later, the kid came running back and the dog followed just after him. Still no shots. The kid didn’t run toward us—I still can’t figure out why. Instead, he climbed in the window of a hut attached to that particular compound and threw a piece of plywood over the opening. The dog was just behind.

And still we watched. No one moved. No one said anything.

The dog forced his way into the hut, and the kid’s screams stopped. As I watched the hut, the word passed down: Stand up, let’s move. So I moved.

I shifted my pack, pulled my eyes away from that door, and walked.

That day I walked away from that village, three weeks later Afghanistan, and, not soon enough, the Marine Corps.

But my mind won’t let go. My guilt has grown in the intervening years. I was mostly innocent in the days before I came to know Afghanistan, its people, and our war. I think the intervening buildup of guilt is derived from not doing enough. Enough for Afghanistan, enough for the Corps, and enough for myself. The farther I get from those days, the heavier my guilt.

I realize now that I don’t hate the people, their country, or the mission. I hate the war. It is an injustice of the highest order to do what we did and continue to do there. We were never committed to anything but sticking around, and the results for the people of Afghanistan show it. The failure to end it compounds not just my guilt but our collective guilt, as a group of veterans, a Corps, and a nation.