Todd Winn, a U.S. Marine veteran, made a powerful statement while supporting the Black Lives Matter movement on Friday, standing alone in full dress uniform in front of the Utah Capitol as temperatures rose to 100 degrees 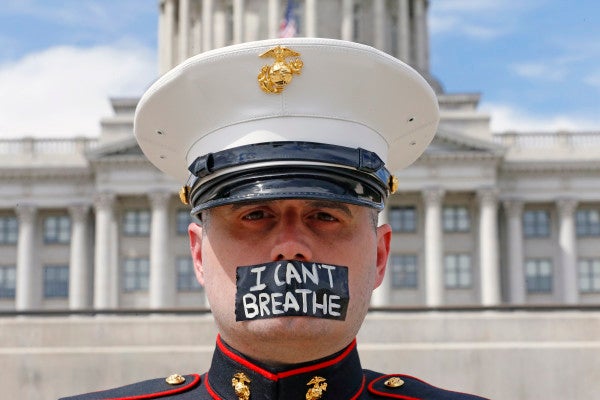 Todd Winn, a U.S. Marine veteran, made a powerful statement while supporting the Black Lives Matter movement on Friday, standing alone in full dress uniform in front of the Utah Capitol as temperatures rose to 100 degrees.

Winn, a two-time Purple Heart recipient, stood outside for three hours in silence. A thick piece of black tape was across his mouth with the words “I can't breathe” written across it.

“Justice for George Floyd, Breonna Taylor, Tamir Rice, countless others,” said a sign in one of his hands.

It became so hot during the demonstration that the heels of Winn's shoes melted off.

Winn stood in the same spot for three hours. He refused water and barely moved, except to take a knee and stand at attention.

“I saw the tape over his mouth and I said, 'Oh my god, this is unbelievable,”' Robin Pendergrast, the photographer who captured Winn's solo protest for the Black Lives Matter movement, told Insider.

“I knew that the statement he was making was pretty special for a lot of people.”

Pendergrast was driving by the Capitol to see whether any demonstrators were gathering early for a protest that afternoon when he spotted Winn.

“I see this single blue figure, standing in front of the opening panel to the Capitol, with a homemade banner on a stick,” Pendergrast recalled.

He said he was immediately struck by the image of Winn alone in his full military uniform.

“I had to get out and support him,” Pendergrast said. “Immediately, the respect was there.”

One of Pendergrast's photos was shared on Reddit, where it received 126,000 upvotes and 4,000 comments.

Among the commenters was Winn, who said the mission of his solo protest was to “silence my own voice.”

“I deliberately chose to treat this as an extended moment of silence, because the voices of so many non-whites are often not heard,” he wrote. “I do not consider this a political issue, I consider it a human issue, and a global one at that.”

Winn said he didn't plan his protest “in coordination with any group” and wasn't trying to “espouse any political ideology,” other than “the inalienable rights and protections all Americans should expect to be provided.”

“I swore to uphold those rights,” he added, “and I feel this is one way of doing so by speaking out against discrimination and failed training / procedure and oversight.”

Winn said he hoped his protest would strike a nerve with people who had been ignoring global demonstrations in support of the Black Lives Matter movement.

“I hope it will be seen by individuals who would normally tune out the protesters and allow them to — at least for a moment ⁠— stop and consider what is really being asked for here,” he wrote.

“Equality, justice, fairness. The right to assemble. The right to be free from discrimination no matter the color of your skin. The right not to fear the police forces whose duty is to protect and serve communities. These should not be partisan political issues, but globally valid concerns we all should be willing to support together.”

Katie Steck, Winn's girlfriend, told KSL-TV that the Marine veteran was “very angered and appalled by the injustices that have been happening” in the United States.

“Seeing a lot of things that have happened, that's not the kind of America he wants,” she added. “That's not what he wants to represent.”

In addition to the triple-digit heat, Winn's protest was challenging because he has chronic fatigue stemming from traumatic brain injuries he sustained while serving in Iraq, Steck said.

Winn said on Reddit that he was wounded twice in the same month after he was deployed to Iraq in 2005. He received two Purple Heart medals in November of that year and was medically discharged.

The veteran said he had received criticism for protesting in his dress blues.

“I recognize there are many active duty and veteran service members who will not be happy that I demonstrated in my dress uniform,” he wrote. “I understand and respect these feelings. It was not a decision I made lightly to do this.”

He added that “we each have to decide for ourselves how to advocate.”

But the image of Winn protesting in his uniform has clearly affected many people. Pendergrast told Insider it was one of the most powerful moments he had witnessed in his 30 years as a photojournalist.

“I know his intent was not to be a show-off,” Pendergrast said. “He's there, and he's making a statement for his generation.”