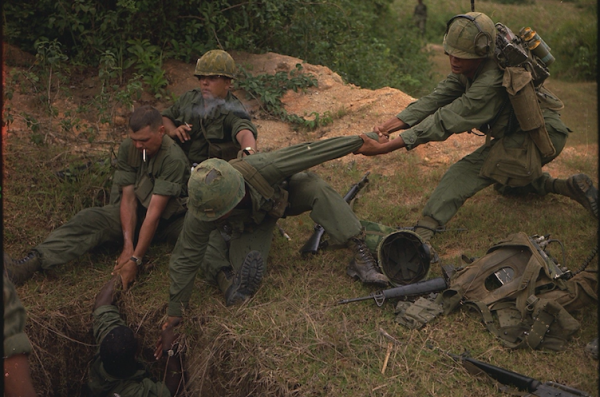 Dave Zien has served his state as a member of the government and his country as a part of the U.S. Marine Corps.

Now the former state senator and assemblyman is asking for a unique but meaningful donation from the community.

Zien is seeking rocks to use as part of monument he is building at his home outside of Eau Claire in the town of Wheaton to honor those who were killed in action during a battle in the Vietnam War in Oct. 9, 1969 — a fight Zien himself was a part of.

Rockpile II will be a tribute to those who bravely fought and gave their lives for the United States during the war and is being erected on Zien’s property at 1716 63rd St. in Wheaton.

“Since being discharged from the USMC in 1970, I have always served veterans. In helping getting them and their families receiving deserved benefits, this has been more than a hobby,” Zien said in an email. “(It has been) passion into obsession.”

Zien is hoping to finish the sculpture this spring or summer and up until this point he has picked nearly every rock by himself. Zien has been permanently disabled since 2006. His left leg was amputated in 2011 and he has undergone more than 100 surgeries and procedures during his life.

Now he’s seeking help and wants to be sure anyone who donates to his cause receives proper credit for helping with the project, with most of the donated rocks being needed on the northwest and southwest walls.

The Rockpile is located in South Vietnam, about 10 miles from the southernmost boundary of the Vietnamese Demilitarized Zone.

Zien will be happy to pick up any donations himself. Interested parties can visit the in-progress Rockpile II tribute anytime, but Zien asks there be no climbing on the tribute.

Rocks from all over

Zien has already received stones from several noteworthy donors that he is prepared to place along the northwest wall of the tribute.

Those rocks include a stone with bore drillings for explosives from the Crazy Horse Monument, stones from the law enforcement, firefighter, EMT and citizen soldier bridges over Highway 29 in Chippewa County, the oldest rock in the Midwest according to UW-River Falls and the University of Minnesota, a stone from a Hixton archeological Indian tool from a quartzite site and stones from the John Sr. and Rosemary Menard farm.

Zien was born in Chippewa Falls and graduated from Cadott High School, where he qualified for the WIAA State Individual Wrestling Tournament during his time as a Hornet.

Often seen in the area on his motorcycle with full-size American and Wisconsin flags, Zien has a lengthy list of honors including being nominated into the Motorcycle Hall of Fame in 2000 and has logged nearly 2.9 million miles on his motorcycle.

The mileage is second in documented lifetime motorcycle mileage in world history, according to Zien, with long-distance riding serving as a therapeutic release for his Post Traumatic Stress Disorder, from which he still suffers, including survivor’s guilt from the battle he seeks to show tribute for to this day.

If you would like to donate rocks to Dave Zien for his Vietnam War tribute, please call or text Zien at 715-829-9436.