Since hearing a young couple was arrested for alleged animal cruelty, a friend of theirs said strangers have been sending... 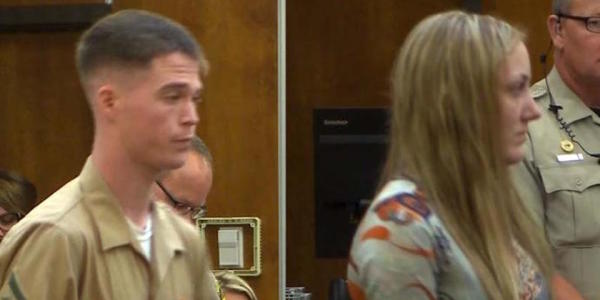 Since hearing a young couple was arrested for alleged animal cruelty, a friend of theirs said strangers have been sending threats to the couple and their family.

That’s one reason Samantha Wesche, 19, didn’t want to speak with the media, said her friend, Sarah Mathis. Her lawyer also advised against it, Mathis added.

Wesche and her husband, Lance Cpl. Damien Irvin, 21, are each facing two felony counts of felony killing an animal by starvation and 43 counts of misdemeanor cruelty to animals.

Onslow County Animal Services found one dog already dead and two kittens in a freezer when they walked inside, according to a previous news release. One dog was convulsing and had to be euthanized as well, making a total of 31 dogs, 13 cats and kittens, and one pig taken from the home.

“The residence did not have a properly functioning air conditioner at the time entry was made,” Animal Services Director Howard Martin wrote in a press release. “Our officers found all animals, including the pig, in pet crates without proper food and water supplies. Several of the cats’ crates were found inside a bathroom and closets.”

But Mathis said Wesche was who helped her through fostering an abused dog named Blue. When Mathis brought Blue home she had an upper respiratory infection, kennel cough, ear mites and a UTI, she said. The dog was previously abused and chewed up everything in the house.

“She checked up on Blue’s health every day,” Mathis said.

It’s because of how concerned Wesche was over Blue that Mathis said she doesn’t believe her friend would ever put another animal in danger.

All of the surviving animals are at the Onslow County Animal Shelter being vetted and prepared for either adoption or a rescue group, Martin said. An adoption date has not been determined yet and Martin said it will vary depending on each animal. Martin said the animals are now thriving.

The charges were brought against Irvin and Wesche based on the situation that was shown when animal services entered the home, Martin said.

Irvin and Wesche were each set with a $5,000 bond and had their first appearance in court Monday morning. Both noted that they’d hire their own attorney, according to court documents, and have their next court dates for the felony charged scheduled for June 12.

Their next court date for the misdemeanor charges is scheduled for June 6, according to N.C. Courts.

Irvin is a Marine stationed at Camp Lejeune, according to information provided by the base, and has been serving in the Marine Corps since June 15, 2015.