As an engineer, Macander had been in war zones, but not in a division combat job. Still, her earlier roles put her into a position to more quickly rise through the ranks. 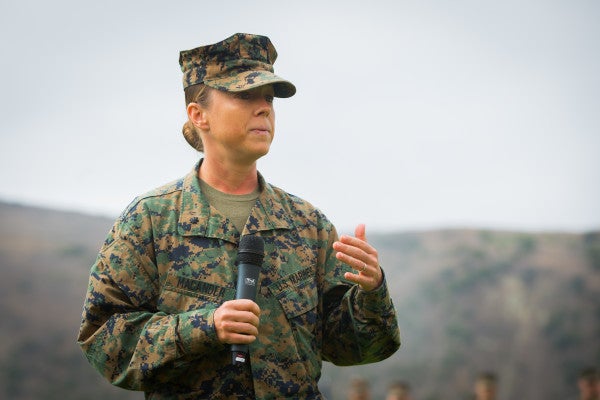 As a young combat engineer officer, Michelle Macander was part of the U.S. Marines’ push into Iraq in 2003.

Then a first lieutenant with the Marine Wing Support Squadron 372 at Camp Pendleton, she oversaw a platoon building a base camp in Kuwait that then pushed into Iraq repairing runways and airfields so American planes could land safely.

Now a lieutenant colonel, Macander recalled one of her first missions there.

“There was a runway with six 50-foot craters,” she said. “We compacted it down and I certified it to land the first KC-130. I stood on a Humvee’s roof, hoping it would land. And it did.”

That and many more tours – including four total deployments to Iraq and Afghanistan – provided the foundation for her history-making assignment. On June 22, 2018, she became the first woman to lead a Marine Corps ground combat unit by taking command of the 1st Marine Division’s 1st Combat Engineer Battalion at Camp Pendleton.

Now, two years later, the 41-year-old Clifton Park, NY., native has completed her two-year tenure, recently handing over command of the battalion to Lt.Col Seth Dewey in a change-of-command ceremony at Camp Pendleton.

In 2013, then-Defense Secretary Leon Panetta lifted the ban on women in combat and in 2016, the Pentagon cleared female Marines to serve next to men in infantry roles. Marine Corps officials announced all Marines would fall under the same policies: there would be no more jobs directed just at women.

As an engineer, Macander had been in war zones, but not in a division combat job. Still, her earlier roles put her into a position to more quickly rise through the ranks.

Rising again to her new assignment at the U.S. Naval War College in Rhode Island, Macander reflects on what she and her Marines accomplished the last two years and the role she played in mentoring and training the next generation of officers. Since she took command, a handful of female Marines have also successfully entered combat positions at Camp Pendleton.

“I set a climate that I’m proud of,” Macander said. “The Marines are trained and are a better unit than when I found them.

“It’s a more balanced battalion. A good unit does everything well. We had a family environment and Marines took care of those to their left and right.”

The battalion now also has the first female executive officer in the 1st Marine Division, and two of its five primary staff members are women. The battalion’s medical officer is also a woman.

“This generation coming up now, it’s just part of their experience,” she said, referring to the younger female Marines. “They were crushing it. I was very proud.”

A first in leadership and preparation

Macander said her role and history-making command came with its own set of challenges. Not from her superiors or other 1st Marine Division colleagues, but from herself.

“There was definitely internal pressure,” she said. “Everything I showed up for, I made sure I was prepared. At every exercise, I was wire-tight. I was going to be the face of females and I wanted to make sure I was ready.”

Marines in this battalion provide tactical and logistical engineer support to other units in the 1st Marine Division. They build bunkers and posts to help infantry Marines survive and fight.

The key to some of her successes, she said, was a commitment to focusing on and training up the enlisted Marines, the ones who are known as the Corps’ backbone.

“We put a lot of authority on non-commissioned officers,” she said. “Pushing the initiative to the lowest level, we need that going forward. You have to have folks at the lowest level making decisions. You have to instill that in training, so they are capable of doing that in combat.”

And she said she’s already witnessed those Marines taking charge. At least 10 Marines in the battalion have been involved in life-saving events while off-duty. In December 2018, six of her Marines were awarded medals for saving the life of a Riverside man severely injured in a motorcycle accident.

Macander grew up in a family where military service was a tradition. Her father, uncle, and grandfather served in the Marine Corps.

“I was just always interested in serving in the military,” she said. “It was the idea of having an occupation that means something.”

The Marine Corps, she said, stood out as the toughest and most challenging of the military branches.

After considering the United States Military Academy West Point, Macander opted for a “regular” college experience and enrolled at Georgia Institute of Technology, where she planned to be a chemical engineering major.

But that was short-lived. A stop in to see the Marine officer-in-charge of the Navy ROTC and a week later she was in uniform.

Macander graduated from Georgia Tech with an international affairs degree in 2000. She spent a year training before she got her first Marine Corps job as a combat engineer.

Her first opportunity to deploy came quickly after Sept. 11 when she joined up with Camp Pendleton’s Marine Wing Support Squadron 372.

“It was pretty awesome, building a base camp and repairing runways from southern Iraq to near Baghdad,” she said.

After her third deployment, she went back to doing something where she felt she might inspire others.

She took the job of Marine officer instructor at the University of Colorado. There, she did what the Marine officer at Georgia Tech did for her: she mentored future Marine officers. After three years, she did a few more operational tours, including serving as Central Command’s counter-narcotics officer in charge in Kabul, Afghanistan.

In July 2017, she returned to Camp Pendleton, this time to serve as the 1st Marine Expeditionary Force’s engineer. There, she advised Lt. Gen. Lewis Craparotta on all things engineering.

When an opportunity arose to put her name in for a promotion, her first choice was the 1st Combat Engineer Battalion.

“I didn’t think, I hoped, but I didn’t expect to get my first choice,” she said. She did some “yelling and a little bit of swearing” when she scored the job.

The first person she called was her wife, Julie Macander, a curatorial researcher for the Smithsonian National Museum for Natural History.

“Good job, Babe,” was Julie’s answer, despite knowing the combat command would put her wife at risk more.

“She was concerned, but she also knew this is what I wanted,” Michelle Macander said.

During her two-year tenure leading the battalion, she deployed platoons of Marines to Australia and provided all the engineering for Steel Knight, a 15-day amphibious, live-fire, and aviation training exercise with the Navy. She also sent a company of Marines to the U.S.-Mexico border and ran large-scale exercises at Marine Air Ground Combat Center Twentynine Palms.

Soon Macander heads to the East Coast and war college – she’ll spend a year learning about other countries and higher levels of government. Instead of focusing on battles and skirmishes, she’ll focus on campaigns and wars. From, there she’ll likely do a tour at the Pentagon.

She said she knows now that a woman has commanded an engineering battalion the path for other female officers is opening up, but it will likely take years before women rise to her same role in artillery and infantry commands.

Her advice: “Be yourself.”

“Don’t try to be something you’re not,” she said. “I didn’t change anything when I took command. I think the Marine Corps is a metronome. Perform to the best of your ability and there will be opportunities going forward.”