A Marine Vet Was Forcibly Stripped And Thrown In A Padded Cell In An Illinois County Jail, Lawsuit Says

She's alleging she was "humiliated, degraded and dehumanized" when deputies forcibly removed her clothes and then left her for 12 hours in a padded cell 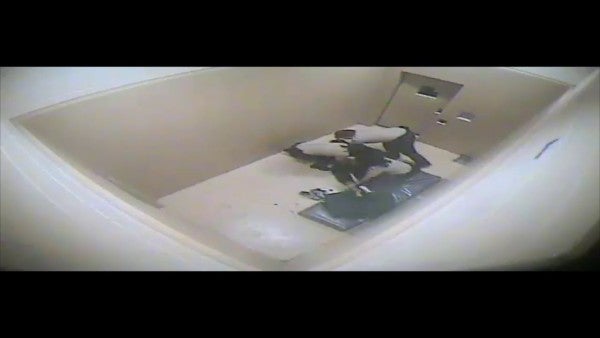 Nearly five years after LaSalle County, Illinois, authorities paid hundreds of thousands of dollars to settle lawsuits by female inmates who were stripped naked in the local jail, another woman is alleging she was “humiliated, degraded and dehumanized” when deputies forcibly removed her clothes and then left her for 12 hours in a padded cell.

Three female deputies stripped Zandrea Askew and removed her undergarments as she lay sobbing face down on the floor of the cell, according to her attorney, Terry Ekl, who provided jailhouse video of the Jan. 20, 2017, incident to the Tribune.

Another video recorded minutes earlier shows what led up to the strip-search. Seated in a chair and speaking in a calm voice, Askew can be seen declining to answer deputies' questions and follow basic instructions during booking. She had been arrested three hours prior, after deputies reported finding her “very disoriented and confused” in her car on the side of the road.

“I didn't do anything wrong,” Askew is heard telling deputies before being hauled out of the room and taken to the padded cell.

The suit, filed in U.S. Northern District Court, names longtime Sheriff Thomas Templeton as a defendant as well as more than a half-dozen deputies involved in the arrest and jail strip-search. It seeks at least $1 million in damages from the sheriff's office.

Templeton, on the advice of county attorneys, declined to comment Tuesday. A phone call to LaSalle County State's Attorney Karen Donnelly was not immediately returned.

This isn't the first time the sheriff's office has come under fire for its strip-search practices. In 2013, Dana Holmes of Coal City filed a lawsuit alleging three male deputies and one female deputy stripped her while images of her naked body were broadcast through the jail's video system after a drunken driving arrest that May.

Four other people — three women and a man — came forward with similar strip-search complaints after the Holmes video became national news. Ekl filed a class-action lawsuit, and the county settled for $355,000 in April 2014. A grand jury investigating the deputies in Holmes' case cleared them of criminal wrongdoing.

Under Illinois law, a strip-search is permitted only when officers have a “reasonable belief” that the subject is hiding a weapon or a controlled substance on his or her body. Officers must get written consent from a supervisor beforehand. The law also requires that the strip-search be conducted by an officer of the same sex as the subject and that it cannot be observed by people not performing the search.

Templeton acknowledged in a January 2014 deposition in the Holmes lawsuit that the sheriff's office had an unwritten policy for more than 40 years to strip people of their clothing if deputies believed they were not cooperating while in custody.

State law on strip-searches does not address situations where a person under arrest is accused of being combative or uncooperative with the booking process.

At the time of the Holmes settlement, LaSalle County authorities promised a new policy to ensure that an inmate's clothing would be forcibly removed only as a last resort. Sheriff's officials conceded that the litigation revealed a gap in jail policies and training protocols. They pledged to do better.

The Tribune reviewed a LaSalle County sheriff's policy dated May 1, 2014, that states deputies may forcibly remove a detainee's clothing “in limited circumstances and as a last resort” when “alternatives to forcible removal have failed or are not feasible.” The policy says a person's refusal to “comply with a required pat-down search,” as was the case with Askew, qualifies.

Ekl told the Tribune that Askew should have been allowed to post bond at the jail immediately in the misdemeanor charges. Instead, the attorney said, she was brutally stripped and locked up for 12 hours in a padded cell.

He said the deputies' actions had nothing to do with a legal search for weapons or drugs, as Askew had been in police custody for about three hours by the time she arrived at at the jail. Instead, Ekl said, it was conducted as punishment because she ignored their questions and commands to stand up for a “pat-down.”

Ekl said he has asked the U.S. Department of Justice to investigate the sheriff's office regarding strip-searches.

“Why do you need to take someone's clothes off if they're not cooperating with you?” Ekl said. “This was not a strip-search where they were looking for contraband. This was a form of punishment.”

Though the lawsuit does not allege racial bias, it notes that Askew is African-American. The race of the seven named deputies is not listed in the federal complaint, though Askew appears to be the only black person visible in the jailhouse video footage.

The incident began shortly after midnight nearly two years ago when LaSalle County sheriff deputies responded to a dispatch call of a possible intoxicated motorist involved in a single-car accident in Marseilles. The deputies found Askew alone in her red Dodge Charger on the side of a road, according to a sheriff's office report on the traffic incident.

Deputies in the report described Askew's condition as disoriented, confused and unable to focus on simple tasks, such as signing a form that indicated she refused medical assistance on the scene.

Askew's lawsuit states she had a valid driver's license and did not appear to be under the influence of alcohol or drugs.

She informed deputies that her car became stuck in a ditch after she pulled off the road, but she could not clearly explain why she had stopped, according to the report. She denied having been in an accident.

Askew, who lived in New Jersey at the time, was on her way to Nevada to visit friends, according to the sheriff's report and her attorney. Authorities said she told them she had taken prescription medication but she “struggled to give a time” when asked when she ingested the pills, the arrest report said. Deputies said they found “several bottles of prescription medications” in her car. The lawsuit and sheriff's office arrest report did not indicate the types of medication.

Deputies arrested her on a misdemeanor charge of driving under the influence of drugs based on her allegedly confused state, records said. She also was charged with resisting arrest after deputies said she refused to get into a squad car, prompting them to place her in the back seat “with the least amount of force necessary,” according to the report.

Ekl said Askew had pulled her car over because she was ill. He said she did not break any traffic laws and cooperated with the deputies' instructions, including being “thoroughly searched” by two male deputies on the side of the road before being transported to the hospital for a DUI blood draw.

Three hours later, after Askew arrived in the county jail in Ottawa, a five-minute video beginning at 3:43 a.m. shows a male deputy removing her handcuffs and instructing her to sit down. When informed she would be patted down per standard jail procedure, Askew repeatedly asked why, failed to answer questions and ignored commands to stand up to be searched.

“I didn't do anything,” she told a female deputy while seated and surrounded by about a half-dozen deputies.

“That doesn't matter,” the deputy responded, according to the video. “You're under arrest … and when you come into our jail you have to be patted down and searched. So are you going to cooperate with us or not?”

Within seconds, three female deputies hauled her out of the room, the video shows. Several seconds later, in the other video reviewed by the Tribune, two female deputies are seen escorting her through the padded cell, stopping when Askew was facing the back wall. The third female deputy was standing nearby.

“All right, you have one chance to cooperate with us and then we are going to begin taking your clothes off you ourselves,” a female deputy told Askew. “Are you going to undress yourself?”

Within seconds, the three female deputies began forcibly undressing her. They soon ended up on the cell floor. Though no male deputy entered the cell during the video-recorded strip-search, Ekl alleges that male deputies watched through the window of the cell door.

One of the deputies covered Askew with what appears to be a blanket or a suicide-prevention suit, but Askew's buttocks were exposed during most of the strip-search, the video shows. Before leaving the cell, a deputy said Askew should remain on the ground “until we shut the door. Do you understand?”

Ekl said Askew was transported to an area hospital upon her release from the jail 12 hours later. The lawsuit alleges deputies “violently pulled (Askew's), hair and caused further pain and injury to (her) body.”

Askew was honorably discharged from the U.S. Marines in 2015 after about seven years of service, according to her military discharge records. She is now living in Pennsylvania while studying for a degree in business administration, according to her attorney. Through Ekl, Askew declined to comment for this story.

None of the deputies named in Tuesday's lawsuit was involved in Holmes' strip-search, court records showed.

SEE ALSO: An Army Veteran Was Left To Die In A Cell While His Jailers Laughed And Took Video

WATCH NEXT: Marine Commandant Gen. Neller Does His Final CFT