The local ACLU chapter on Friday joined the Military Religious Freedom Foundation in publicly accusing Marine leaders of discriminating against Jews and other... 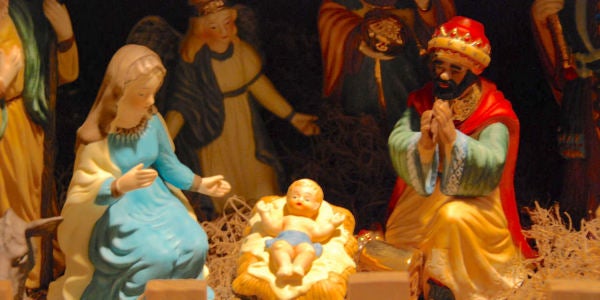 The local ACLU chapter on Friday joined the Military Religious Freedom Foundation in publicly accusing Marine leaders of discriminating against Jews and other non-Christian recruits — an allegation the Corps’ officials deny.

At issue is the creche erected during each year’s Christmas season on the grounds of Marine Corps Recruit Depot in San Diego to commemorate the birth of Jesus. In December, the lighted display was located near the base chapel and featured statues of the Three Wise Men bearing gifts to the newborn.

On Jan. 17, the New Mexico-based foundation petitioned Marine Brig. Gen. William Jurney — commander of the boot camp and the Western Recruiting Region — to let troops of other faiths put up religious displays near the creche. The foundation said it represents 27 active-duty, retired and veteran Marines affiliated with the depot.

Twenty of those individuals are Jewish and want to place a Hanukkah menorah on the depot’s grounds each December, the foundation said. The group also said seven Marines who are Christian or don’t worship any deity joined the petition, contending that the Corps appears to promote Christianity over other faiths at the depot.

On Feb. 10, Jurney’s staff judge advocate general, Lt. Col. Jeffrey Munoz, told the foundation in a letter that such concerns were “premature” because there’s no longer a creche on the MCRD grounds and “the (next) holiday season is months away.”

Munoz said the Corps is in full compliance with the U.S. Constitution and federal, state and local laws, and that the service would never endorse any religion over another.

“Compliance with the law is a matter that we take seriously and adhere to scrupulously. … All service members and civilian employees aboard this installation are free to practice their religion as provided for in law and regulation,” Munoz wrote.

On Friday, David Loy, legal director for the ACLU of San Diego and Imperial Counties, entered the fray. He wrote to the Corps alleging that Munoz was trying to sidestep the issue — an effort that he described as “at best evasive and at worst thinly veiled discrimination.”

Loy urged the Corps to immediately grant permission to the Jewish Marines in question so they could start planning a Menorah display for the 2017 holiday season.

On the same day, depot spokesman Capt. Matthew Finnerty said the Corps declined to elaborate “beyond what we already provided” in Munoz’s letter to the foundation.

In 1971, the landmark U.S. Supreme Court case of Lemon v. Kurzman concluded with a ruling that a government policy violates the Establishment Clause of the 1st Amendment if its purpose isn’t secular, primarily advances or inhibits religion, or fosters an excessive entanglement of the government with a faith.

“This isn’t just about a Marine Corps that says your constitutional rights are premature. These sorts of actions by the Marines destroy unit cohesion and ruin morale,” said Michael “Mikey” Weinstein, a former Air Force officer and the foundation’s creator. “These Marines shouldn’t have to be like the tarantula on a wedding cake, afraid to go up the chain of command. They should be protected because the Bill of Rights exists not for the convenience of the majority but to prevent the tyranny of the majority.”

Weinstein said his organization used to rely on Glen Doherty, a former Navy SEAL and member of the foundation’s board, to solve religion-related problems with the Corps before they escalated into the public arena. Doherty, a guard at the U.S. consulate in Benghazi, Libya, was killed during the Sept. 11, 2012 attack on the diplomatic compound by Islamic militants loyal to Ansar al-Sharia, a terrorist organization.

“He handled the area for a very, very long time, both San Diego and Twentynine Palms. But he was tragically killed,” Weinstein said.