With honor ceremony, Marines and sailor who died in ocean training exercise are flown to Dover Air Force Base

The flag-draped caskets of seven Marines and a sailor who died when their seafaring vehicle sank off San Clemente Island headed to Dover Air Force Base on Wednesday, Aug. 12 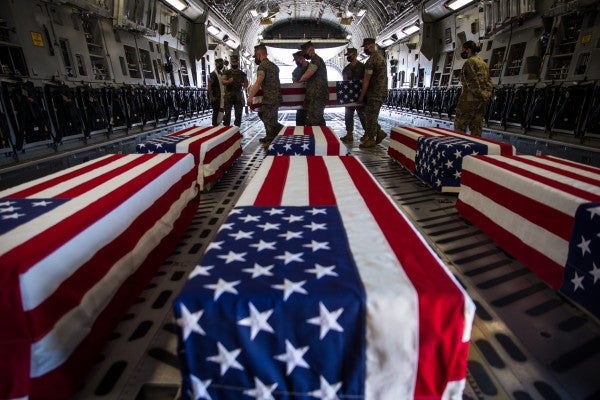 The flag-draped caskets of seven Marines and a sailor who died when their seafaring vehicle sank off San Clemente Island headed to Dover Air Force Base on Wednesday, Aug. 12.

In a final “honorable carry,” each casket was moved by a Marine or Navy pallbearer from a hearse to the awaiting plane during a private gathering at Marine Corps Air Station Mirimar. The vehicles arrived at the flight line one by one.

Once all the caskets were aboard the C-17, a Navy chaplain aboard the plane said a final prayer.

Chaplains have been present during each step from search and rescue to recovery. A chaplain from the 1st Marine Expeditionary Force, which oversaw the training exercise the servicemen were part of, insisted on being on the ship at sea to watch over the servicemen as each was recovered.

Chaplains have also provided spiritual guidance and comfort to Marines and sailors of the 15th Marine Expeditionary Unit as they mourn, officials said.

At the Delaware base, the caskets were turned over to the Air Force Mortuary Affairs Operation Center, a place where all service members go before they are released to their families.

The amphibious assault vehicle they were riding in during a shore-to-ship training exercise sank on July 30. They were recovered on Aug. 7.

An eighth Marine, Lance Cpl. Guillermo S. Perez, 20, who died in the training accident was flown to Dover on Aug. 5.

Members of the San Diego Police Department escorted the motorcade of funeral vehicles from Balboa Naval Hospital to Miramar.