The U.S. Marine Corps' Black Sea Rotational Force left its base in Romania for training in Bulgaria this month, carrying... 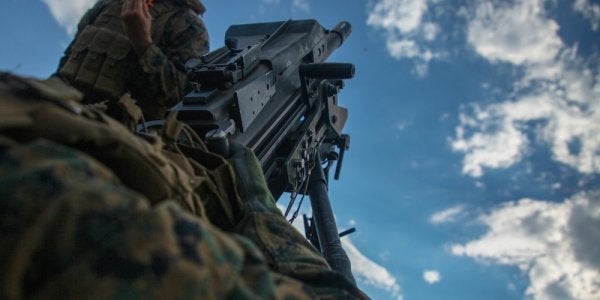 The U.S. Marine Corps' Black Sea Rotational Force left its base in Romania for training in Bulgaria this month, carrying out exercises that are another sign the U.S. military is preparing for a kind of conflict that's different from what it has faced in recent decades.

A Marine Forces Europe and Africa release issued earlier this month said units from the rotational force were headed to Bulgaria's Novo Selo training area, “where they would be able to take advantage of the rough, verdurous terrain for multiple training events.”

“We deployed from the place where we're stationed at in Romania to this training area in Bulgaria. That way we can utilize the training areas out here that are a little better suited for the training that we're trying to accomplish,” an unidentified Marine said in a video released this week by the command, first spotted by Marine Corps Times.

The Marines carried out a number of exercises focused on combined-arms proficiency and on building operational capacity.

“During this training event we had snipers conducting everything from unknown distance ranges to live-fire stalks,” said 1st Lt. Daniel Kult, a combined anti-armor team (CAAT) platoon commander. “We also had our 81 mm mortar platoon conducting dismounted and mounted live-fire operations, both day and night.”

“We have our combined-anti-armor platoon conducting high-angle Mark-19 fire, which is a new thing for us,” the Marine said in the video. “It's not really done in the Marine Corps anymore.”

High-angle fire with the Mark 19, an automatic grenade launcher that can fire up to 60 40mm grenades a minute, could come in handy if Marines engaged enemy personnel behind walls or other barriers, Marine Corps machine-gunners told the Times. Such fire could also be useful against Russian armor or other vehicles.

The gunners said that with skilled observers and good communications, high-angle fire — a skill taught at the Corps' advanced machine-gunner course — from Mark 19s could quickly be walked onto a target.

According to the release, platoons from Weapons Company from the 1st Battalion of the 6th Marine Regiment, typically work independently, making the joint exercises at Novo Selo a valuable opportunity.

“We don't always get together as a company and do these combined training events, so as a whole, it improves our unit cohesion,” said Cpl. Benjamin Lepla, a forward observer. “Now we know how long it takes for every section to set up their equipment and assault the objective from different positions.”

“The most important event that we're doing out here is the combined attack utilizing the entire company,” Kult said. “It's a unique opportunity because normally we're all away from each other, either supporting other companies or in direct support of the battalion.”

NATO forces have increased their presence in Eastern Europe in the years since Russia began its incursion in Ukraine in 2014, and US military units in Europe have been boosting their capabilities.

Earlier this year, the Army's Ironhorse Brigade arrived for a rotation in Eastern Europe — but instead of sailing to Germany, the unit disembarked in Belgium for the first time in decades to practice traveling across the continent by road, rail, and barge.

During the most recent iteration of the Saber Strike Exercise, U.S. armored units also practiced traveling across Eastern Europe and the Baltic states. During the exercise, Air Force A-10 Thunderbolts practiced rough landings on a highway in Estonia — a drill only recently restarted after being discontinued in the 1980s.

The U.S. military has been shifting its attention to preparations for a potential conflict with near-peer competitors like China or Russia — a change outlined in the National Defense Strategy released earlier this year.