Marine Who Rushed Into Burning Building: We Came to Help Our Neighbors

Editor’s Note: This article by Gina Harkins originally appeared on Military.com, the premier source of information for the military and veteran community. Capt. Trey... 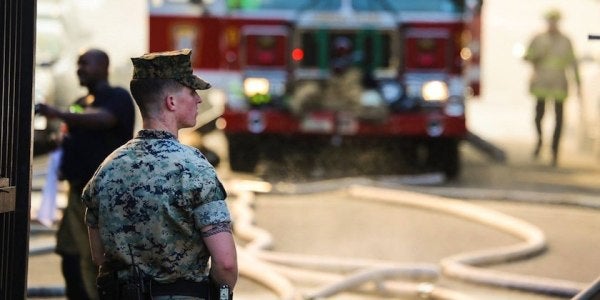 Capt. Trey Gregory was one of the first 10 Marines to race toward a burning senior-living facility in Washington, D.C., on Wednesday — and the teamwork he saw there is enough to get him choked up.

From junior enlisted Marines to the base commanding officer, the response was a display of level-headed professionalism and duty for the neighbors of Marine Barracks Washington, he told Military.com.

“Nobody was worried about ranks,” said Gregory, an aviation logistics officer by trade who's currently serving as the Barracks' security forces company executive officer. “The level of maturity, accountability and staying calm in the face of a very hectic and somewhat dangerous situation showed me that the training we do, day-in and day-out, plays a huge role.”

The three-alarm fireerupted in the Arthur Capper Senior Apartments at about 3:30 p.m. Wednesday, just behind the Barracks where Gregory's team is based. Within minutes, the security force Marines were equipped with radios as they headed into the building to alert their neighbors, many of whom are elderly and can't walk on their own.

Marines from 8 and I running towards the fire raging in SE DC. pic.twitter.com/4vSKsuyTGo

“We knew we had people in there who needed help,” Gregory said. “The bottom floors weren't too bad when we got in there, but that top floor got dicey.”

The Marines paired off and stayed in communication on the radios, he said, especially on the top floor, where the smoke was much thicker. They steered clear of any doorways that were hot to the touch as they went room-to-room, clearing every unit they checked and helping those who needed it to safety.

“Some of the residents are bedridden or paralyzed, so we picked them up and threw them over our shoulders,” he said. “I remember carrying a paralyzed guy down the stairs with the colonel, a lieutenant and a gunnery sergeant. Everybody was just there to help.”

Gregory estimates the Marines made 30 or 40 trips in and out of the building. There were no deaths or life-threatening injuries reported in the 162-unit complex. D.C. Fire and Emergency Medical Services Chief Gregory Dean said Thursday that they're looking into whether all of the fire alarms were functioning.

About 100 Marines from the Barracks eventually pitched in, some racing over with wheelchairs and stretchers. Marine logisticians also brought over food and water, so those moved out of smoke-filled units immediately had something to drink.

Marines from the Barracks Washington responded to a fire at a neighboring senior housing complex, September 19, 2018.U.S. Marine Corps/Cpl. Damon A. Mclean

Social media was filled with videos and images of the Marines assisting, but Gregory said none of them is concerned with the fanfare or recognition for what they did.

“We have wonderful neighbors at all of our facilities all over the world,” he said. “We're just super thankful that everyone could escape this tragedy.

The real credit, he added, goes to the D.C. firefighters and other emergency responders.

“They were in the fight for sure,” Gregory said. “The D.C. fire department has a tough, tough job, and we were just there to assist.”

The Marines are looking forward to reconnecting with the neighbors they helped move to safety. The community members have always been supportive of Marine Barracks Washington, he said, and the leathernecks were glad to pay it back.

“We just hope that people understand that when Marines see a crisis, we respond,” Gregory said. “It's what we do whether we are overseas or here in D.C. Geographic location doesn't matter.”