Marine MPs to be allowed to carry concealed firearms on base 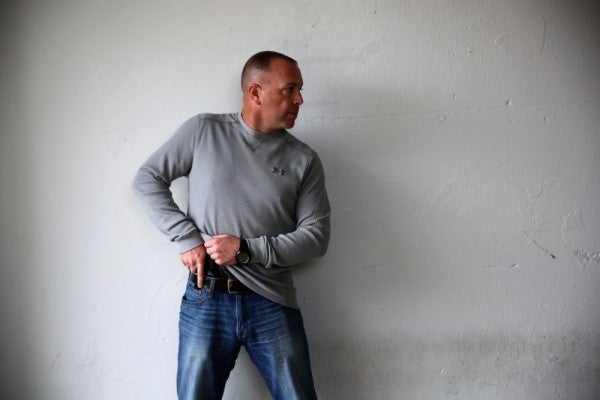 Marine Corps law enforcement personnel who meet specific federal qualifications are now authorized to carry their own concealed firearms on base — even when off duty, a three-star general announced.

While the new rules apply only to Marine law enforcement personnel, Lt. Gen. George Smith Jr., head of Marine Corps Plans, Policies and Operations, indicated that additional concealed carry policies could be in the works.

“[Headquarters Marine Corps] will continue to develop policy to address the total force requirements for the carry, transport, and storage of concealed aboard Marine Corps property,” he wrote.

The moves follow two recent fatal shootings on separate Navy installations — one in Hawaii and another in Florida. The attacks killed six and prompted a Navy Department-wide review of safety measures.

The permissions apply to uniformed and civilian Marine Corps law enforcement personnel, but only if they meet the credentials laid out in section 926B of the federal Law Enforcement Officer Safety Act, known as LEOSA. Approved personnel include military police, criminal investigators and Marine Corps Law Enforcement Program police officers.

The Marine Corps' policy aligns with LEOSA, which allows qualified civilian law enforcement agents and retirees exemption from most state or local laws that would prohibit them from carrying concealed firearms.

The recent attacks on the two Navy bases have reignited questions about why troops who qualify on service weapons aren't allowed to carry firearms to protect themselves on base. Similar questions were raised after the 2015 terror attack on a Marine Corps recruiting station and Navy Reserve center in Tennessee.

A Navy Department policy authorizes Gen. David Berger, as commandant, to grant uniformed and civilian personnel permission to carry personal firearms on Marine Corps property. The policy approved this week applies only to Marine Corps installations in the U.S. and its territories, Smith wrote in his message.

Any law enforcement personnel opting to carry a concealed weapon must comply with the rules listed in a 2016 Defense Department directive called “Arming and the Use of Force.” That includes rules about firearm registration, storage and transportation.

Military policy also bars Marines from carrying concealed firearms in Defense Department schools, some courtrooms and other locations where carrying a weapon is prohibited by law.