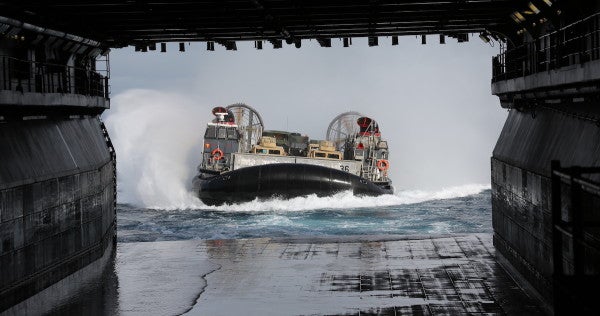 A Navy amphibious assault ship with thousands of Marines on board will skip a planned training exercise in Africa to instead head toward the Middle East as tensions there spike.

The amphibious assault ship USS Bataan and 26th Marine Expeditionary Unit will not participate in Exercise African Sea Lion in Morocco, Military.com has confirmed. Instead, the Bataan, its crew and roughly 2,200 Marines aboard are moving to the Middle East.

The amphibious assault ship and Marines are conducting routine operations while “demonstrating the inherent flexibility of our naval forces,” Lt. Cmdr. Matthew Comer, a spokesman for U.S. 6th Fleet told USNI News. “For operational security reasons, we do not discuss future operations.”

Once the Marines and the Army's 1st Brigade Combat Team from the 82nd Airborne Division arrive in the region, the number of troops sent to the Middle East since May will approach 20,000.

Tensions have been high with Iran for months, but a Thursday airstrike that killed a top Iranian military leader has led them to soar in recent days. The Iranians have pledged “harsh retaliation” for the killing of Maj. Gen. Qasem Soleimani, who led the Islamic Revolutionary Guard's elite Quds Force.

President Donald Trump on Friday defended the killing, saying it was done to stop a war, not start one. A Pentagon statement issued late Thursday night said Soleimani was “actively developing plans to attack American diplomats and service members in Iraq and throughout the region.”

The 26th MEU, along with the Bataan Amphibious Ready Group, deployed from the East Coast in December. The ships arrived off the coast of Morocco this week for the planned African Sea Lion exercise, USNI News reported.