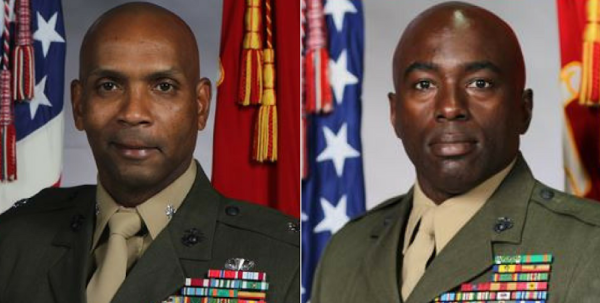 The Marines fired two top leaders of a Twentynine Palms unit on Monday.

Candelario, 47, was the commander of the “Wolfpack” and Chestnut, 45, his senior enlisted Marine.

“We can’t comment on internal administrative details in the Marine Corps.”

Sgt. Maj. Chestnut’s position will be filled by 1st Sgt. Luis Ortega, a member of the battalion, until a permanent replacement will be named.

The 3rd Light Armored Reconnaissance Battalion is a fast vehicular unit that conducts reconnaissance-in-force ahead of infantry forces.

In March the unit participated in its Marine Corps Combat Readiness Evaluation at the sprawling San Bernardino County base. The grueling tests are designed to test a unit’s ability to function in battle.

A South Carolina native who became a cannoneer crewman, he had served in Australia as the Marine Air Ground Task Force Sergeant Major in support of Marine Rotational Force Darwin.

“To the Marines and sailors of the ‘Wolf Pack’, you don’t owe me anything, but I owe you a lot,” Chestnut said when he was welcomed to Twentynine Palms. “I’m here to tell you that I am here to serve you.”

He is a veteran of the wars in Iraq and Afghanistan. A woman who answered at his home on Wednesday said he could not come to the phone.

The son of a Marine, Candelario graduated in 1994 from Davidson College with a Bachelor of Arts degree in History with a concentration in Gender Studies.

He made multiple deployments overseas, including to Afghanistan, Kuwait, Okinawa and Djibouti.

After graduating early from the Naval Postgraduate School in 2007, he served in the U.S. Embassy in Botswana before becoming the executive officer of 2nd Battalion, 3rd Marines.

Assigned as a Recovery Team Leader with the Joint Prisoner of War/Missing in Action Command, he led two missions in Vietnam and Laos.

After serving as the regimental operations officer, regimental executive officer, and the acting regimental commander of 5th Marines at Camp Pendleton, he took command of 3rd LAR on June 15, 2017.

Efforts to reach Candelario by telephone on Wednesday were unsuccessful. He did not answer multiple emails seeking comment.