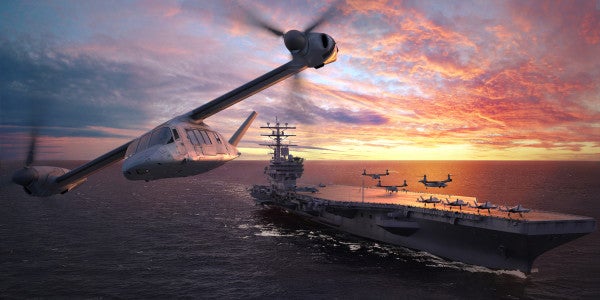 As the Marine Corps enters the final stages of preparing to receive the CH-35K King Stallion, its new heavy-lift workhorse helicopter, aviation officials are already looking forward to the Corps’ next generation of rotorcraft.

Lt. Gen. Jon Davis, the Marine Corps’ deputy commandant of aviation, told reporters Friday at the American Enterprise Institute in Washington, D.C., that the Corps had asked for optionally manned capability for the Pentagon’s future vertical lift plan, which aims to develop replacement choppers for the Army and other services.

Davis said he envisioned a vertical lift platform that might be operated unmanned to deliver cargo and manned for more sensitive or technically complex missions.

Potentially, he said, such a platform, equipped with a sensor, could also serve as an unmanned sentry of sorts from the air in defense of a deployed ship.

Davis noted that the future vertical lift, or FVL, program is currently in the down-select phases, and acquisition was expected to take place in the 2030s.

“The future of aviation is operationally manned,” Davis said.

The Air Force and Marine Corps are both part of the FVL program, which is led by the Army.

One candidate to satisfy FVL requirements is Bell’s V-280 Valor aircraft, a next-generation tiltrotor that does feature a fly-by-wire control system. The other aircraft being evaluated in the FVL program, the medium-lift Sikorsky/Boeing SB-1 Defiant, also features fly-by-wire capabilities.

Davis said Marine officials had communicated with both contracting teams about their interest in optionally manned technology.

Meanwhile, the Marine Corps continues to evaluate concepts for a separate unmanned or optionally manned air cargo and logistics platform.

The K-MAX had previously deployed to Camp Leatherneck, Afghanistan, where it assisted Marines in moving cargo and gear across the battlespace.