You may want to make sure you know the words. 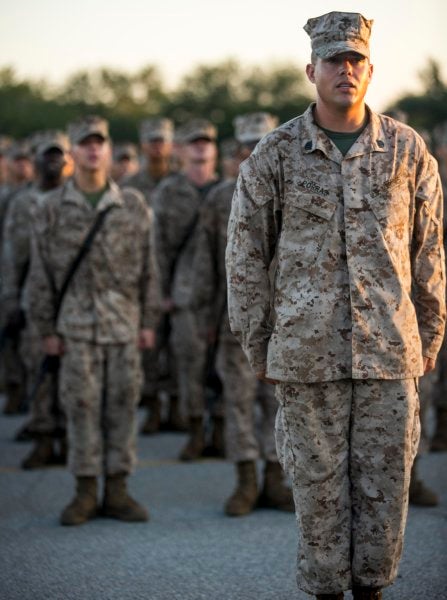 Brace your ears: You're about to hear Devil Dogs in all keys singing about the halls of Montezuma and the shores of Tripoli the next time the “Marines' Hymn” is played in public.

The commandant of the Marine Corps reportedly wants to hear more leathernecks proudly belting out the lyrics to their hymn. That's according to a new report from Marine Corps Times about upcoming changes to the service's drills and ceremonies manual, which will include a new directive about the beloved and highly recognized hymn.

“It is now directed that Marines, present and who have served honorably, who are not in formation or part of an actual ceremony, or marching in a parade or review, who when they hear the playing of the Marines Hymn will stand at attention, face the music and sing the words to the Hymn,” the updated drill and ceremonies manual will read, according to Marine Corps Times.

Lt. Col. Stuart Fugler, a spokesman for Marine Corps Combat Development Command, which will oversee the release of the new manual, confirmed that an updated version is expected to be released in April. None of the changes are final, he said, until the head of his command signs off on them.

Leathernecks typically quietly stand at attention when the “Marines' Hymn” is played. That's out of respect for the song, whose lyrics are said to date back to the 1800s, according to Headquarters Marine Corps. Marines should still show that gesture of respect, according to the changes outlined by Marine Corps Times, but they'll now face the music and sing.

The new manual, which is awaiting approval from Lt. Gen. David Berger, head of MCCDC who was nominated to be the next commandant, includes changes to Marine Corps birthday ball, retirement and change-of-command ceremonies, along with a section on why drill is important to the Marine Corps, Fugler said. If Berger approves the changes, they'll go into effect immediately, he said.

It has been about 13 years since the last drill manual update, Fugler added, which was initiated in 2003 and changed in 2006.

~popular_source-pageview
from the halls of montezuma...
Marine Corps
marines hymn