The Marines have launched dual investigations into the Aug. 30th death of a student at Camp Pendleton’s School of Infantry.... 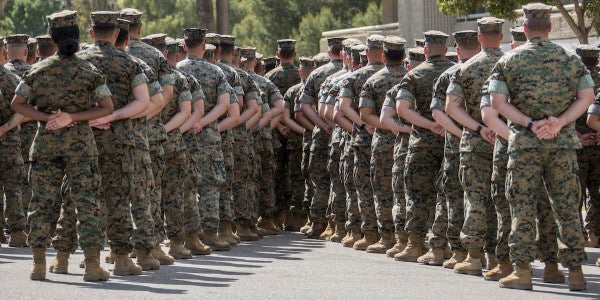 The Marines have launched dual investigations into the Aug. 30th death of a student at Camp Pendleton’s School of Infantry.

Pfc. Michael Philomeno Giannattasio, 22, of Armada, Michigan, was found unresponsive during land navigation training on the Basic Reconnaissance Course, according to a written statement by the Corps’ Training and Education Command headquarters in Quantico, Vir.

After failing to resuscitate him, Emergency Medical Services responders pronounced him dead on the scene.

TECOM spokesman Capt. Joshua Pena said that more information could not be provided until Friday but said that the Marine’s death is being probed by both the command and Naval Criminal Investigative Service.

“The Marine Corps is in mourning and offer our deepest condolences,” Pena said in the statement emailed to The San Diego Union-Tribune. “We continue to support the family during this difficult time. PFC Giannattasio was an outstanding Marine who stepped up to the difficult challenge of earning a spot amongst our distinguished reconnaissance forces. Though he will be deeply missed, he will always remain in our ranks. Once a Marine, always a Marine.”

Telephoned at his Camp Pendleton office, Reconnaissance Training Company commander Maj. J. E. Schillo said that he had been ordered to refer all questions about Giannattasio’s death to TECOM.

“Orders are orders and I think you understand,” said Schillo before hanging up.

Giannattasio graduated from boot camp at Parris Island, S.C., on April 21 with Platoon 3028, India Company, 3rd Training Battalion. He was awarded the company’s “Iron Man” prize for the highest physical fitness and combat fitness scores, acing 600 out of 600 points, according to Parris Island officials. He was an expert rifle marksman.

Giannattasio’s girlfriend, Jessica Zyrowski, said that she had spoken to him on the weekend before he died and texted him on Aug. 28. She recalled him as a rugby and cross-country standout who graduated from Macomb Community College last year with an Associate Degree in Engineering before deciding to enlist in the Corps.

“He was the best guy I ever met,” she said. “He always wanted to be the best. He always gave his 110 percent, no matter what he did.”

“He was the perfect Marine. All the other Marines liked him and he was at the top of his classes,” she added.