The Marines Are Looking To Get Rid Of Steel Ammo Cans 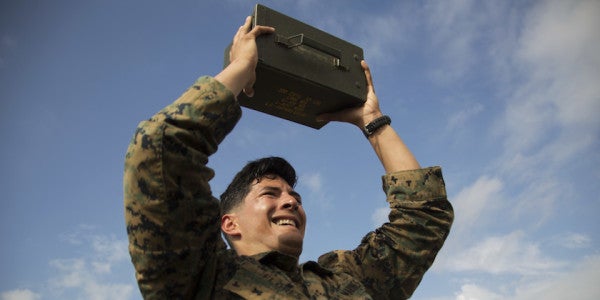 In the Marine Corps’ rush to drop weight, one of the most beloved and storied pieces of gear could be left behind. At the service’s first Equipping the Infantry Challenge here Sept. 27, program managers said they’re looking for a lighter, more practical alternative to the iconic ammunition can.

Scott Rideout, program manager for ammunition at Marine Corps Systems Command, told industry leaders that the rectangular can, which today looks much the same as it did during World War II and Vietnam, may be overdue for an upgrade.

Marine Corps ammo comes to the warfighter, he said, “in the same metal can that it’s come in for 100 years. That metal can is one of those things that when the ammunition is brought to Marines, they take the ammunition out, distribute it however they’re going to distribute it, then throw away. The ammo can itself provides no value added to the Marine, except to help get the ammunition there.”

Some may disagree. The blog Shooter’s Log in 2013 listed 50 possible uses for the ammo can that range from improvised washing machine to anchor. Another website, Survival List Daily, topped that with 74 uses, including field toilet and cook pot.

Related: The Army And Marine Corps’ Ammo Debate Is About More Than Bullets »

The gear is even more central to Marine Corps identity: one of the elements of the Combat Fitness Test that all Marines must pass once a year is the ammunition can lift, in which troops are tested on the number of times they can lift a 30-pound can above their head and shoulders within two minutes.

Emerging technology, such as logistics drones that might be able to carry resupply items to troops in the field, may also put limits on how much a new delivery of ammunition can weigh.

The cans, which weigh anywhere between three and seven pounds depending on their make and the caliber of ammunition, can amount to a quarter of the ammo weight that Marines are carrying, Rideout said.

“If we can get that weight out of the system, that’s more ammunition that can be resupplied to Marines to allow them to do their jobs,” he said. “So we need lighter-weight packaging. Ammo is what ammo is, but there are a couple areas out there where we can reduce weight to enable Marines to do their jobs better, especially against a near-peer type competitor or distributed ops.”

Ammo cans aren’t the only area getting a look.

Rideout and Mary Flower LeMaster, chief engineer for ammunition at SYSCOM, said the brass casing that houses bullets may also be ripe for improvement.

“The brass provides no value added to the weapons system; it’s just to enable the round and the propellant to interface with the weapon to provide effect downrange,” Rideout said. “That’s where we need to attack that weight. And there is technology out there that can do that and so we’re looking for industry to help us there.”

Rideout and LeMaster provided no alternatives to these key ammunition items, and it’s unclear how the Marine Corps might move forward with service-specific improvements to items used by multiple service branches, like ammo cans and brass. But this call-out to industry is in keeping with a broader service effort to solicit revolutionary ideas to improve the way Marines fight on the battlefield. During the same Infantry Equipping Challenge event, SYSCOM Commander Brig. Gen. Joseph Shrader said he wanted ideas for a meal, ready-to-eat optimized for Marine infantrymen in the field, with more efficient and practical packaging.

Currently, the ammunition managers said, they’re looking for ideas to improve five different calibers of ammo, as well as the cans: 9mm, 5.56, .762, .50-caliber, and .300 Winchester Magnum.