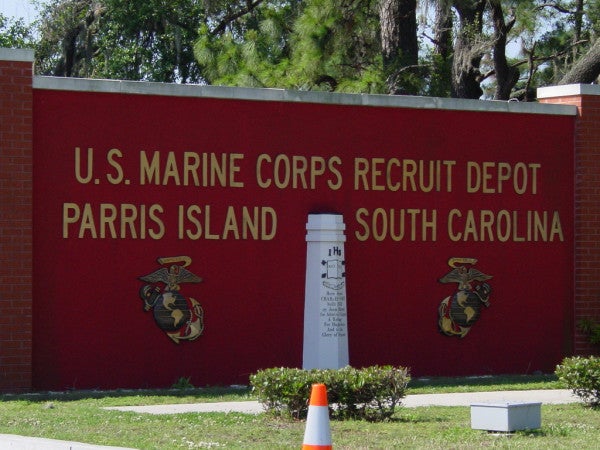 A Marine's mother and sister were killed in a Virginia car crash on the way to see her graduate from Parris Island boot camp last week.

Two days earlier, Maples' mother, Melanie Tapper, 57, of Harleysville, Pennsylvania, was killed when the 2019 Mitsubishi Mirage she was driving broke down on I-95 South in Sussex County, Virginia, and was hit from behind by a tractor-trailer, reported The Sussex Surry Dispatch.

The 13-year-old girl who had been in the front seat of Tapper's vehicle also was killed, according to The Progress-Index of Petersburg, Virginia. A passenger in the back seat was hospitalized with injuries that were not considered life-threatening. Neither of the passengers was named publicly.

The tractor-trailer slid onto the shoulder and overturned after the crash, The Progress-Index reported. That driver sustained minor injuries.

A statement issued Thursday by the Capt. Bryan McDonnell of the Marine Corps Recruit Depot confirmed the deaths in Maples' family.

“Our deepest condolences go out to Pvt. Maples and her family following the recent loss of their loved ones. A host of individuals at various commands and agencies worked to establish a robust support network which will continue to aid Pvt. Maples as she takes the next steps of her Marine Corps journey,” the statement reads.

A GoFundMe page set up by Christopher Falls on behalf of Maples had a goal of $10,000 to help with funeral expenses. As of Wednesday evening, it had raised more than $29,000.

“She … is responsible for moving her Mother and Sister's remains from Virginia back to Pennsylvania and plan the funerals. Please help her out. Let her know she has a family within the military. Thank you for your time and efforts,” the fundraising page reads.

Falls disabled the fundraiser on Thursday because it had nearly tripled the goal.

He wrote, “For all that shared and donated, you truly inspire hope and exemplify compassion on a higher level. The young lady is very appreciative.”

A celebration of life is scheduled for 10 a.m. Saturday, Feb. 15, at Sharon Baptist Church in Philadelphia, according to a post on Facebook Thursday afternoon. Savin Funeral Home of Philadelphia is handling arrangements.