Hundreds of guests and Marines witnessed three small boys tug a parachute down to reveal the newly dedicated Gifford Hall... 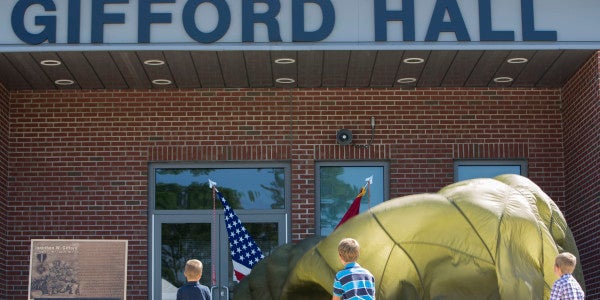 The academic facility was named in honor of Gunnery Sgt. Jonathan Gifford after he was killed in action on July 29, 2012 while serving with the 2nd Marine Raider Battalion deployed in Afghanistan.

RELATED: How to become a MARSOC Raider in 3 steps »

The small boys assisting in the dedication ceremony were three of Jonathan and Lesa Gifford’s five sons, Jonathan, Joseph, Patrick, Thomas and William.

“This is the first dedication for Critical Skills Operator in MARSOC’s 10 year history” said Col. Brett Bourne, Marine Special Operation School commanding officer. “Jonathan Gifford is the first of the modern day Raiders to be memorialized.”

On July 29, 2012, Gifford and his 14-man Raider team were assisting an Afghan special operation commando force in Afghanistan’s Badghis Province when they began taking heavy fire from a Taliban ambush.

Gifford safely moved several Afghan commandos to a protected landing zone for medical evacuation before mounting a counterattack on the Taliban ambush.

During the assault, Gifford sprinted across exposed terrain to lead the counterattack that killed a Taliban insurgent firing from a window before he dropped a grenade down the chimney of a key building in the enemy’s position.

He continued his attack until he was fatally wounded, allowing the Afghan commandos to secure the village of Bala Bokan, according to the MARSOC Public Affairs Office.

“John Gifford was an instructor at the Marine Special Operations School almost from the very beginning. He was personally responsible for developing MARSOC’s Advanced Sniper Course, which we still run today,” said Bourne. “Those who knew Jon comment on the things they learned from him, his patience as a teacher and his ability to break down complex subjects into terms that all students could easily understand and apply.”

Gunnery Sgt. Gifford was posthumously awarded the Navy Cross, the nation’s second-highest award for valor and the highest from within the Department of the Navy, for his heroic acts on July 29, 2012, according to the Navy Cross official citation.

“Jon and I served at this school together as instructors. I never hoped, I never dreamed, never would wanted to stand up here and talk about a fallen brother, but I’ll tell you I’m proud to stand here right now with Jon’s name behind me,” said Phillip Nolan, a former staff sergeant that deployed to Afghanistan with Gifford in 2004.

With assistance from the MARSOC Foundation, the Marine Special Operations School will now have a 7’ statue of Gifford, a plague with his portrait and forever bear the name Gifford Hall.