An active-duty service member can "friend" or "like" the social media page of a candidate or cause, but cannot invite others to "like," "friend" or "follow" the page 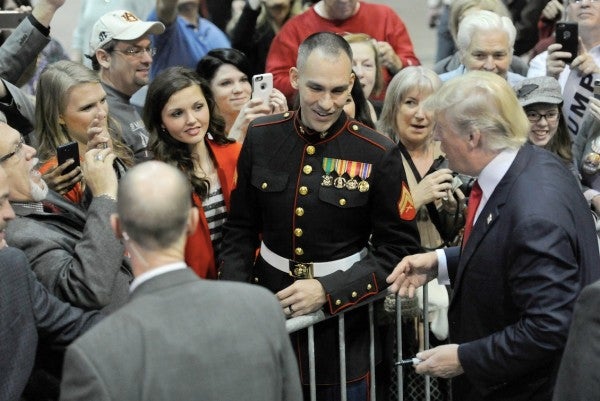 As a final, intensive year of campaigning begins ahead of the 2020 presidential election, the Marine Corps has issued a new message to troops making clear what's off-limits to them in terms of political activity — particularly on social media.

The message, released this month, reiterates past guidance: Marines can vote and verbally express political opinions, but cannot use their uniform to suggest military endorsement. But it expands on historically grey areas that have gotten troops into trouble.

Regarding social media, active-duty troops and federal employees can use their accounts to express personal views, including those on political issues and candidates, “much the same as they would be permitted to write a letter to the editor of a newspaper,” the message states. However, if it's clear from the account or post that the author is an active-duty service member, the posting must include a disclaimer stating that the views expressed are those of an individual and not the Defense Department or Marine Corps.

But sharing or linking to a political page crosses a line.

Shares are out, but likes are OK, according to the guidance. An active-duty service member can “friend” or “like” the social media page of a candidate or cause, but cannot invite others to “like,” “friend” or “follow” the page, or otherwise invite them to participate.

If a Marine is not on active duty, there are fewer restrictions. Reservists and others in this category may post what they wish on social media “so long as the member does not act in a manner that could reasonably create the appearance of official sponsorship, approval, or endorsement by the DoD or the Marine Corps,” according to the message.

And political social media activity of any kind must be conducted on a service member's own time: Political emails and social media messages cannot be set and posted in a federal building at any time, even from a personal electronic device.

“Individuals should never use government equipment when engaging in political activities,” the message adds.

The message also includes guidance for reservists — a thorny area, as those in the Reserve can run for and win political office.

Reserve members, and military retirees, can use photographs of themselves in uniform in campaign materials, according to the message, but these images must include “a prominent and clearly displayed disclaimer that the military photograph does not imply endorsement by the Department of Defense or their particular Military Department.”

The official Marine Corps seal and iconic Eagle, Globe and Anchor emblem may not be reproduced in campaign literature, the message states.

But while the service has broad authority to regulate the behavior of active-duty troops and vigilantly guards use of its copyrighted emblems, it's not completely clear how it plans to enforce guidance governing retirees running for political office. Military.com has reached out to the Marine Corps for more information on this policy.

The message includes a final piece of guidance pertaining to political signs and posters. While active-duty troops are allowed to display a political bumper sticker on their personal vehicle, displaying a “large political sign, banner or poster” on a personal car is prohibited. Also barred is the display of a publicly visible partisan sign or banner on the outside of military housing, even if that housing is privatized.

Most of the items addressed in the new message appear to be prompted by a recent real-world event as the military navigates the ambiguous boundaries and protocols of social media.

In 2015, Marine Cpl. Jason Perkins received a formal rebuke for performing “The Star-Spangled Banner” in his dress blues uniform at a Donald Trump rally. The new guidance makes explicit that this activity is off-limits.

In 2017, Navy SEALs with Naval Special Warfare Group 2 got in trouble with their command after they were spotted flying a large Trump flag from their tactical vehicle in a convoy on a Louisville, Kentucky, highway.

And more recently, President Trump's penchant for spotlighting troops at his events has led to controversy. In May, Navy officials announced they were reviewing whether uniform sleeve patches sporting a picture of Trump and the words “Make Aircrew Great Again” — a riff on Trump's campaign slogan — fell afoul of political prohibitions.