Storming a beach under a hail of gunfire has never been easy for the Marine Corps. But with rapid advances... 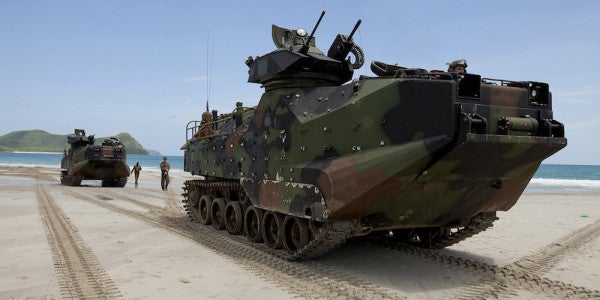 Storming a beach under a hail of gunfire has never been easy for the Marine Corps. But with rapid advances in technology, they now have to contend with precision missiles and other fearsome air and coastal defenses that make an already dangerous mission even riskier.

“I don’t think the next fight is going to be a stability op/counterinsurgency: It’s going to be a violent, violent fight,” said Marine Corps Commandant Gen. Robert Neller of future conflicts.

To counter these threats, the Marines are scrambling to develop a new operational concept dubbed Expeditionary Advance Base Operations which will require an entirely different approach to amphibious assaults as well as new weapon systems.

Related: Here Are All The High-Tech Goodies On The Marine Corps’ Wish List »

Highly accurate missiles can now hit ships and landing craft while they are still hundreds of miles from shore, making it far too dangerous for Marines to storm a beach with their current capabilities. But it’s not only near-peer militaries like China and Russia that possess a deadly arsenal of weapons, nonstate actors like Hezbollah and Houthi rebels in Yemen now have easy access to anti-ship missiles, unmanned boats, and other sophisticated technology.

Given that it’s impossible for Marines to destroy all of an enemy’s air and coastal defenses, commanders are exploring ways to create temporary “bubbles” where Marines can safely get ashore.

The Marine Corps has yet to detail the specifics of its new operational concept, but preliminary planning documents indicate officials are considering a mix of manned and unmanned systems distributed across a network of small, floating barges.

A wargame toolkit from November 2016 shows barges equipped with railguns, antiship cruise missiles, and Tomahawk missiles as well as F-35Bs and MV-22 Ospreys. Meanwhile, a mix of submersible, aerial and floating drones would provide logistical support.

According to Dakota Wood, a senior defense fellow at the Heritage Foundation and a former Marine, the large invasion forces of the past are too easy a target in today’s environment. Instead, future landing forces will need to maintain a small signature to make it more difficult for enemies to detect.

“If I have to worry about 50 or 100 potential targets, that distributes the enemy’s fire and attention span as well,” Wood explained.

Related: The Marine Corps Just Announced Its Next Experimental Unit »

But in order for the plan to work, Wood said each platform will need to pack some serious firepower because otherwise “the enemy won’t pay much attention.” This would create a “targeting dilemma” for an enemy force as focusing firepower on a single target is difficult and inefficient.

Once safely ashore, Marines could be protected by swarms of unmanned aircraft.

“As soon as radiates, gives off a signature, that swarm is just going right after them,” said Doug King, the Ellis Group director.

The capabilities outlined in the wargaming toolkit were notional concepts and not an official strategy, however, there are indications that the Corps is moving in this direction.

Last October, the Marines successfully tested the M142 High Mobility Artillery Rocket System (HIMARS) from the deck of a ship in the middle of the ocean. The precision-guided artillery system successfully hit a target floating seventy kilometers away.

In April, the Marines will host an Innovation Industry Day with members of academia and the defense industry to explore the new Expeditionary Advance Base Operations concept. Officials hope to review emerging technologies and engineering innovations that could eventually be incorporated into future amphibious assaults.

For the past decade, the Marines have been completely reshaping their strategy and tactics after then-Secretary of Defense Robert Gates called the feasibility of beach landings into question.

In a 2010 speech, Secretary Gates said, “Looking ahead, I do think it is proper to ask whether large-scale amphibious assault landings along the lines of Inchon are feasible,” referencing the major Marine invasion that decisively turned the Korean War in the UN’s favor.

The remarks sparked a heated debate and ultimately led to the cancellation of the $14.4 billion Expeditionary Fighting Vehicle.

Related: Combat Is No Longer Off The Table For Marines In Afghanistan »

The vehicle was designed to safely ferry Marines from ship to shore and then seamlessly operate inland as an armored vehicle without stopping on a beach, but the technology proved troublesome and resulted in years of delays and billions in cost overruns.

After nearly two decades of fighting inland in Afghanistan and Iraq and fears of budget cuts, the Marines have focused on returning to their maritime roots. For many Marines, amphibious assaults are the key distinguishing capability of the service.

“There is a paranoia, bred into every Marine, that the Marine Corps will be made to look like the Army, and then in lean times something will get cut — the 'extra' army,” said retired Marine Lt. Gen. Emerson “Emo” Gardner.

Eugene K. Chow writes on foreign policy and military affairs. His work has been published in Foreign Policy, The Week, and The Diplomat.